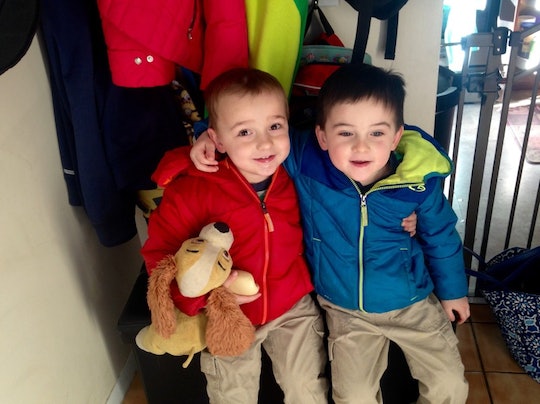 I Used Astrology To Parent My Kids

I'm a textbook Sagittarius: even though I believe we ultimately control our own destiny, I've always loved checking my horoscope for a heads-up on what the week has in store for me, because the prediction is usually spot on. But even though I routinely consult the stars for tips in dealing with my own life, it never occurred to me before to check out my kid's signs and see if there were things I could do for and with them to make them happier.

When my twins were infants, my only concern was just keeping them alive until bedtime. Now that they're almost 4 (*sob), it's clear they have distinct personalities. Even small things, like asking them to put on their shoes or deciding what to do with the hours between dinner and bedtime, can turn into a huge struggle. I wondered if there was a way to speak Capricorn to them, a way to parent them according to their astrological sign.

I consulted with the lovely and insightful Kim Tigar, an "intuitive astrologer" based in North Carolina, to find out what the universe knew about my kids that I didn't. Tigar has been doing astrology for more than 25 years, and once I gave her my boys' birthday, place and time of birth, she was able to give me a ton of information about their stubborn Capricorn ways. Armed with this info, I set out to parent my children for a week according to their astrological sign.

My fiery Sagittarius nature is great when I want to stand up for myself in front of a catcaller, but it also means that when it comes to parenting, I have a super short fuse. I raise my voice far more often than I like and I often find myself doing things for them, like zipping their jackets or putting their shoes on, instead of letting them try to be independent and do things for themselves. Anytime we try to leave the house, it means that one or all of us ends up crying and I vow to never take them anywhere ever again.

Tigar's assessment was a good reminder that as hard as it might be, I need to start letting my kids do things for themselves. "Their lead planet is Saturn so they will be quite responsible and need to be assigned tasks to help them feel connected and important," she said. Although I just wanted to get out the door and in the car so we could go to the store, I decided to let the stars guide me. Rather than put the kids' shoes on for them, I told them what to do, and sat on my hands the whole time. Yes, Remy put his shoes on the wrong feet and Lolo couldn't get the tongues straight, but we got dressed without a meltdown.

For once, I didn't feel like people were staring at me for being the mom with the screaming kids.

I decided to keep trying to tamp down my natural instinct to take over at the store. Normally, my kids hate sitting in the cart at the grocery store and will pick fights with each other. This time, I told them they each had a "job." Remy had to make sure we got milk and bread, while Lolo was in charge of the beans and bananas. Incorporating them into the shopping worked really well. For once, I didn't feel like people were staring at me for being the mom with the screaming kids. If they liked being told what to do so much, maybe I should start giving them chores?

When Tigar told me my Capricorn twins had "a very curious nature" and "a strong creative side," I already knew that was true. They're constantly painting, drawing, or sticking random scraps of paper on paper plates with glue. I thought I was already doing plenty to nurture their love of art. But was I?

Tigar also said the boys "require an avenue to express their individuality." I realized that even when I do lead art projects, I sometimes dictate to them exactly how they should look. So I backed off. When Lolo wanted to write letters on the roof of his house instead of coloring it in, I bit my tongue. And when Remy told me he wanted face paint that looked like Frozen, instead of telling him that wasn't a real thing, I grabbed my eyeshadow palette and went to work. Both of them were so happy. We had a much smoother afternoon than we usually do, with far less crying or feet stomping. As a Sagittarius it can be hard for me when people don't follow my lead, but I see how my kids are benefiting from me letting them do their own thing.

My kids are in preschool three days a week. They have gym class and double recess, so they have plenty of time to burn through all their energy. When they're home, however, that's a different story.

"Their expression of energy may also be a little erratic, so daily exercise will help them focus and channel it in a positive way," Tigar told me.

When the weather is nice, I'm more than happy to take my kids to the pool or to a park. But now that it's cold and snowy out, we're stuck inside, and the kids are definitely suffering. Within an hour of breakfast, they're either running around the first floor or wrestling. I'm left trying to calm them down and worrying that someone is going to end up with stitches.

After talking to Tigar, however, I realized I might be going about things all wrong. "Their expression of energy may also be a little erratic, so daily exercise will help them focus and channel it in a positive way," she told me. So instead of trying to stop my kids from getting all jumpy, I found a safe way for them to do it. I grabbed all the pillows off the couch and set up a runway, using a few pillows to pad the sharper corners of the walls and stairs where they were landing, and let them run until they collapsed. They loved it, I didn't have to put anyone in a timeout, and no one drew blood. Win-win.

As a Sagittarius, I'm prone to dramatic outbursts. But Tigar reminded me I'm not just being emotional around my partner anymore. My kids are watching, and how I act affects them. "They are very sensitive emotionally," she said, "and can get their feelings hurt easily and can pick up the energies (positive or negative) in others."

The more frustrated my partner and I got with each other, the more my sons' energy started to spiral out of control.

I've noticed before that whenever I try to have a serious talk (usually, a fight) with my partner in front of the boys, we can never resolve the issue because the kids start to throw their toys around or tackle each other. Today, when my partner and I squared off over whose turn it was to make dinner, I noticed that my boys were watching us. The more frustrated my partner and I got with each other, the more my sons' energy started to spiral out of control. I pointed this out to my partner and we agreed to table our discussion until after they went to bed.

It was actually a good idea to hold off on arguing with my husband. It gave us both time to cool off and actually have a constructive conversation. (Eventually, we reached a compromise: he's going to take over dinner once a week, and I will try to keep my opinions on his menu selection to myself). But more importantly, it stopped the kids from taking on our bad vibes.

I love my son Remy fiercely, but he knows exactly how to make me scream into a pillow. I already knew that as a Capricorn baby, he's super sensitive, but because he's only 3 years old he doesn't always have the vocabulary to tell me what's upsetting him. I'll try to soothe him, but after 20 or 30 minutes of him sobbing nonstop, I start to lose it. Sometimes I'll just snap and say, "Stop crying and tell me what's wrong or you're going to your room."

Within minutes, my son was smiling and singing. Score one for the stars!

I hate doing that and I know it's not helpful, but in those moments I just don't know what else to do. Tigar gave me some ideas. "Any avenue that allows them to be creative (art, music, pictures, etc) will help channel their creative side and give them a positive way to express their feelings," she said.

So today, when my son started boo-hooing over who knows what, rather than pleading with him to tell me what was wrong or banishing him to the couch until he calmed down, I offered him his cat piano. I don't know if it was just because this is one of his favorite toys or if banging on the keys really was therapeutic, but within minutes he was smiling and singing. Score one for the stars!

I'm into yoga as a way to handle my stress and keep me limber enough to run after the kids. Typically, I roll out my mat when the kids are sleeping because nothing says "not relaxing" like seeing two kids weaving through your legs during a downward dog. But today I decided to see if Capricorn kids would like yoga too. Tigar suggested they might. "They are energetic and prefer outdoor activities," she said. They also have a very strong imagination and can be quite intuitive. "

It was 12 degrees, so going outside wasn't happening, but they were pumped to practice some swan poses and child's pose with me. And after a while they start to ask for poses of their own, like dragon pose and Paw Patrol pose (which is like downward dog, but with singing). Was I as Zen afterwards as when I do yoga solo? Of course not. But my kids had an absolute blast. And finding activities that worked for all of our personalities was making the week really fun.

As a work-from-home mom, sometimes I need a minute (or 60) to finish up a project or take a phone call without interruption. And nothing keeps a preschooler occupied like an iPad and an Amazon Prime password. But I try to avoid reaching for the electronic babysitter, because I worry about the influence it's having on the kids. I'm concerned they'll zone out all day if I let them.

Tigar told me she would expect nothing less from my boys. "They are also easily influenced through images, especially movies and anything with pictures," she said. I was on a tight deadline today, but rather than try to tempt them into silence with coloring books only to have them interrupt me five minutes later, I decided to embrace who they are and handed them the iPads we usually reserve for sick days and long car rides. Not only did they let me work, I actually got everything accomplished much faster without their interruptions.

I used to feel a gigantic amount of guilt at the way my kids would light up whenever I told them they could watch something, but knowing that it's part of their personality has helped me take screen time in stride.

This week taught me that even though my kids are young, their astrological signs can still be totally accurate. Parenting my twins according to their Capricorn needs required me to push aside a lot of my own Sagittarius instincts. I had to think hard about activities that would satisfy their particular personalities. But acknowledging their natural tendencies made this week one of the easiest ones I've had as a parent. I guess it's true that Sagittariuses and Capricorns make an excellent team.