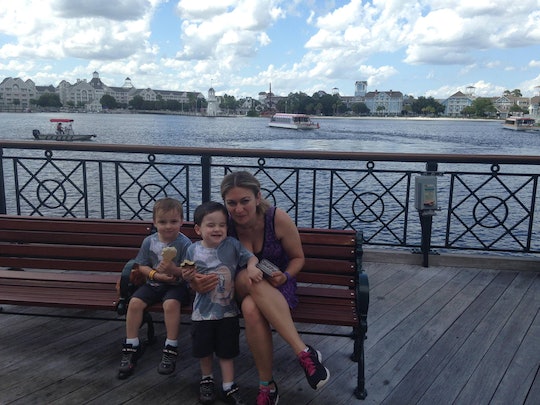 I Tried Positive Parenting For A Week & Here's What Happened

Having 3-year-old twins is awesome, except when it comes to trying to discipline them. My kids are curious and active, which I hope will help them become amazing adults who go out and do great things in this world, but here and now it's a struggle to get them to listen to me when I ask them to do something simple, like put on socks or try to keep them safe by telling them to stop making a giant body slide out of the couch cushions. (Some days it works but others, I'm not so sure.)

Trying to enforce timeouts when one kid is still on the loose is a joke, and the only thing that happens when I yell is that I end up with a sore throat. At my wit's end and with a family vacation on the line that I desperately didn't want to get ruined with bad behavior, I decided to give positive parenting a try. Dr. Sarah Vinson, an Atlanta-based psychiatrist and Assistant Professor of Psychiatry at Morehouse School of Medicine, told Kars 4 Kids that "positive parenting emphasizes the communication of clear parental expectations, collaboration between the parent and child, praise and reinforcement for desired behaviors, and the avoidance of harsh consequences such as physical punishment." In short, postive parenting is all about supporting your kids, setting clear goals, and working together to make them happen. Sounds easy enough, right?

For a whole week I followed four of the major ideas behind positive parenting: no timeouts, role modeling, teaching my kids why certain behaviors are unacceptable, and eliminating the word "no" from my vocabulary.

Here's what happens when you try to be a more positive parent.

Growing up, if my mom told me no or to stop doing something, that was the end of the discussion. "Because I said so," was all I needed to hear to get me to stop misbehaving. Positive parenting, however, believes that a more effective way of getting kids to listen is to explain to them why you're asking them to do or not do something. I thought this was a little too touchy feely for my tastes — after all, how well can 3 year olds really understand an adult's reasoning? Turns out, pretty well, actually.

We took the boys to the ocean for the first time this season and when they tried to run out into the rough waves, instead of simply shouting "No!" and then hauling us all back to the car when they didn't listen to me, I told them they needed to stay close to me because the waves were strong and they were little and they could get hurt. Using simple phrases they understood worked, because they surprisingly spent the day sticking nearby and warned each other if they drifted to far out into the water. It was actually a pretty great day and it didn't take that much extra effort to be a more positive parent. Maybe there's something to this.

Day 2: Taking A Time Out From Time Outs

Keeping with the theme of explaining the rules, positive parenting banishes timeouts in favor of the "do over": walking your child through what just went down and helping them see how they could have acted differently in hopes that they'll get it right next time. Learning from your mistakes does seem like a smarter thing to do then simply punishing a kid, and in fact, when I took the time to explain to my kids why they should come get me for help when they want to play with the same toy instead of holding their own duel, it was more effective than a timeout. Walking them through how to share the toy took the same amount of time as putting them in timeout would have, but there were far fewer tears and I ended up feeling like I did something right as a mom instead of feeling frustrated.

They still totally fought over the same toy five minutes later though, but maybe that's just what kids at this age do, and hopefully in time they'll learn how to share.

I was really looking forward to going out with my partner for dinner — just the two of us — tonight, so of course the sitter cancelled on us at the last minute. Rather than ordering in and pouting about it for the rest of the night, we decided to risk taking our kids to the restaurant with us. Modeling the behavior you want your kids to see is a big part of positive parenting, and since I'd love to be able to enjoy a meal in public with them without a public scene, this seemed like a great time to practice. Plus, I really wanted queso and that dish just doesn't travel well when we get takeout.

I was proud of myself for saying, "not now, but we can get ice cream later," instead of issuing a flat-out "no," and I was thrilled that they took the news in stride and didn't whine or complain.

Rather than rushing through our meal and parking the kids in front of iPads for the duration of dinner, we took the nearly empty restaurant as the opportunity to teach our kids how to sit and relax and not fling the chip plates at each other.

While I was so proud that the kids made it to the end of the meal without any tears or meltdowns, it wasn't exactly the relaxing date night I had hoped for. Sure, the kids modeled our behavior and were better behaved because of it, but it was still a lot of work on my part. Maybe over time this would pay off, but honestly I kind of missed letting them zone out Daniel Tiger's Neighborhood while I ate in peace.

My kids hate to hear the word "no" as much as I hate saying it, so I was excited to try the positive parenting method of swapping out "no" for "not right now," or "no, but." The idea is that rather then telling your kids flat-out "no" when they ask for something, you offer an alternative or a time in the future when they can do what they're asking for. We were in a theme park for the day and when my boys spied an ice cream stand right after breakfast they asked for a treat. I was proud of myself for saying, "not now, but we can get ice cream later," instead of issuing a flat-out "no," and I was thrilled that they took the news in stride and didn't whine or complain.

But I neglected to remember the second part of not saying no, which is the need to follow through on what you say. When we circled back past the ice cream stand later in the day and they sweetly asked, "Is it time now?" we were on our way out of the park so knew I had to say yes, even though it was 1,000 degrees out and that ice cream would melt almost instantly. We got through it (with the help of a lot of napkins) and it felt good knowing I'd stuck to the rules of positive parenting. However, I'll put more thought into what I say instead of "no" going forward because kids will not let you slide once you promise them something.

By day five I'd realized that positive parenting was definitely working: I was more patient with my kids and I found myself actually sad to see them go to bed instead of counting down the minutes like I usually am. But positive parenting requires me to be very present and "on" all the time, which leaves very little time for playing on my phone or zoning out with a book while the kids play. I know that's probably a good thing overall, but real-talk time? I need a break sometimes, and I like knowing I can get that without feeling like I'm doing something wrong.

Day 6: Who Are These Angels, And Where Are My Kids?

Further proof that positive parenting was working? I didn't have to yell once on day six. Not a single time. That hasn't happened since before the kids could walk. My email is often neglected and my laundry is definitely overflowing out of the closet because all of my time is spent focused on my kids, but they're so sweet at this stage in the experiment that honestly, I barely care.

Even though they weren't the cherubic angels that they were on day six, I did still feel like I was enjoying my kids so much more since I started positive parenting. They're more affectionate with me and try to explain things to each other like I explain things to them, and it's nice to feel like they "get" it. On the rare occasions that I do raise my voice, they get really upset and I feel awful, so it's just another reason why I want to try and make this positive parenting thing our new normal.

Is Positive Parenting The Answer To My Parenting Prayers?

Not to sound over dramatic, but heck yes! Even though I was skeptical at first, positive parenting changed the way I relate to my kids and made a huge difference in their behavior. Being constantly engaged with them is a lot of work, but worth it for the trade off in less tantrums and tears. If this was an infomercial, now is where I'd tell you to ACT NOW! Because I definitely am. Even if I don't stay a positive parent forever — I'd love to promise that, but who knows what the future will bring — I'm definitely a convert after seeing first-hand just how well the strategies work on my boys. And not to mention, practicing positive parenting makes me a lot less stressed when the boys don't do as I ask. Sure, it's more effort. But it's worth it.