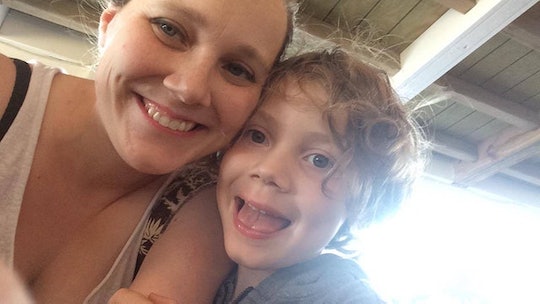 I Tried Quaker Parenting For A Week

I'm not religious, and neither is my partner. We aren't raising our kids to believe in anything specific. We'd rather them ask questions and decide for themselves if they believe in something bigger than the world they can see. But if there is one organized religion that does resonate with me, it's the Quaker church.

The Quaker church was founded in mid-17th century England, as a splinter group of Christianity. Quakers are known for their peacefulness, their simplicity, and their dedication to justice and equality, and I strongly believe in all of those things. I figured that just because I don't believe in organized religion doesn't mean that I can't take what I like from their teaching and ideals and apply them to my parenting. My family was taking a week-long trip to the beach, so I decided to test out some new parenting ideas out away from our day-to-day routine and try Quaker parenting for a week.

I hate car trips. I hate being trapped in the car. I hate not being near a bathroom. And I hate parenting children who might start puking from car sickness.

The anxious part of me just wants to zip through the trip and take as few breaks as possible, just to get it over with. But since I was trying to parent like a Quaker, I tried to take my kids' needs and desires as seriously as I took my own. That's because Quakers believe in the idea of "God in everyone," which means that no one person is necessarily the authority on anything. (It's why the Quaker church doesn't have ministers, and why one of the core tenets of Quaker meetings is that anyone can share testimony if they feel moved to do so.) I realized that this applied to my kids as well: I may be their guardian, but their needs and comfort are no less important than mine.

So during the trip, if my kids were thirsty or needed a break or wanted the air conditioning turned down lower, I did it. It worked. Because we took as many breaks as they needed (and bought them Tic-Tacs because it kept the carsickness at bay), there was almost no whining on our trip down.

Because it worked so well on the first day, we let the kids decide what they wanted to do. They chose to go down to the beach with my partner, while I stayed at home with my youngest. I'd occasionally shuttle snacks across the road and over the dunes, or take a kid back to the house to pee. It wasn't that relaxing for me or my partner, but the kids had a ball. (And besides, when are vacations with kids that relaxing?.) They loved having the freedom to dictate their own schedule, and because they were so energetic during the day, they slept amazingly well that night.

Without a doubt, this was the hardest part of Quaker parenting: during bedtime, I constantly had to remind myself to strive for peacefulness.

One of the biggest tenets of Quakerism is equality: not just within social justice movements, but also in terms of the family. To that ended, I wanted to make sure I had an equal amount of one-on-one time with each of my kids during this vacation. Because he's still little and nursing, I get a ton of one-on-one time with my baby, but I wanted to be sure I got it with my other kids as well.

I decided to take each of my older kids on a trip, just the two of us. My oldest went with me to the grocery store, and my daughter went with me to an antique store with me. There were dozens of retro troll dolls there, and she was in heaven. My partner also took time with each of the kids, taking my daughter to the beach to fly a kite or playing game after game of chess with my oldest. Bless him, he also did many a diaper change for our youngest.

I'm never going to treat each of my children exactly the same way, because they're drastically different people. But I want to make time for each of them, and they seemed to appreciate that.

One of our biggest struggles on this vacation was bedtime. The kids were all in one room, along with my two nephews, which meant there were four kids between the ages of 4 and 8 in the same room. As you can imagine, things got chaotic. I tucked the kids in and did crowd control every night. Without a doubt, this was the hardest part of Quaker parenting: during bedtime, I constantly had to remind myself to strive for peacefulness.

There was a lot of silliness at bedtime, and when things got out of hand, my first instinct was to get loud and stern while I read to them. But it seemed like they were feeding on my frustration, so I thought about the Quaker ideal of peacefulness and the idea of consensus; i.e. that everyone can work together to ensure health and happiness. I found that when I waited quietly for them to settle down, or suggested that we try for a peaceful bedtime, that seemed to resonate with them. At one point, I threatened to turn the lights off earlier, but I did it in a calm and quiet voice.

I'll admit it: sometimes, keeping my cool during bedtime felt impossible. But as the nights wore on, the kids seemed to adjust to the routine, and reading to them became one of my favorite parts of vacation.

My partner and I decided that we wanted a day just for our family, without the aunts and uncles and cousins joining us. So we drove to an island that has an aquarium and a small airport. We all loved the aquarium, and as we watched the little airplanes land and take off at the airport, my partner shared his knowledge about planes and airfields.

I'll be honest: I do not share his passion for aviation. Even writing that word feels dull to me. I could tell my kids weren't all that enthused about it, either. But because we had spent the entire week doing things that made everyone in the family happy, we had set the tone for a peaceful week, and there wasn't a single complaint.

By the time we got back to the beach house, I was dying for some alone time. I was able to swing in a hammock with a book for almost two hours without anyone bothering me. That was partially because my partner was there to run interference with the kids, but my kids also seemed to understand that letting me read in silence was a nice gift that they could give to me.

I seem to share a lot of my parenting ideals with Quakerism, and striving for equality and peacefulness and finding joy in the company of my family was amazing.

Parenting like a Quaker was awesome. I seem to share a lot of my parenting ideals with Quakerism, and striving for equality and peacefulness and finding joy in the company of my family was amazing. I also took the idea of finding God in everyone to heart, particularly when it came to my baby. I realized that he knows exactly when he needs to eat, or when a snuggle is necessary. He's wise in that way, and as his mother, I started really listening to his wisdom.

Moving forward, I want to strive to keep my family as peaceful and thoughtful and fun as I can. I'd also like to take on more of the Quaker ideas in terms of our family's place in the community: What can we do as a family unit to serve movements of social justice or to be stewards of the earth? There is a lot to ponder.

One thing that's lovely about Quaker philosophy and lifestyle is that while the church has Christian roots, it doesn't demand that you believe in God or Jesus to practice parts of Quakerism. Instead, Quakers encourage you to look inside yourself and listen to others, and I'm going to keep doing just that. I may not have strong religious beliefs, but when I reflect on my love for my family, I am overwhelmed by joy and I do feel like there is some larger force at play. Some Quakers might say that's the divine at work.