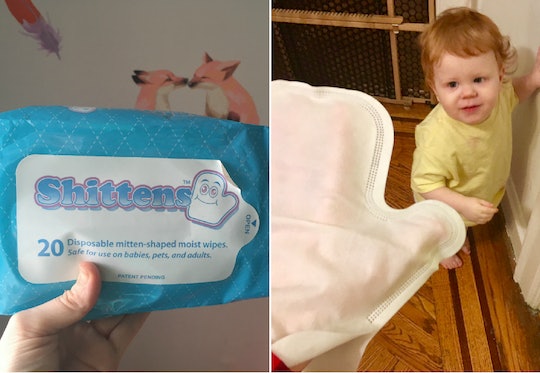 I Tried Shittens — The Newest, Viral Parenting Product — To See If They're Actually Useful

They're been around since 2013, but early this year, Shittens, makers of mitten-shaped wet wipes ("patent pending"), sold out of their inventory, bumping prices up to $36 on Amazon with month-long backorders. We parents suddenly could not get enough of the poop gloves, snapping them up faster than Girl Scout cookies. It was seemingly confirmation of the promise to all expectant parents that they should "Watch out for all the poop!" "You'll be buried in poop!" "Hope you're ready to change all those crap-filled diapers!" So are Shittens any good? Does every mom need a packet? I hustled through secret channels to get my hands on a pack, and I have thoughts.

I’m a great candidate for Shittens because with a 2-and-a-half-year-old and a 1-year-old, I am at Fassbender-painting-the-walls levels of shit in my life. My older child is in the midst of potty training, and has been for going on nine moon cycles. When the sun rises in the West, she will have completed her training and I will not have to tip hunks of poo from her Sebastian underpants into the toilet bowl anymore. But for now, she is a thriving human child capable of eating lasagna and quesadillas and cheesecake, and sometimes I catch the poop face in action over by her tiny bookshelves, launching into a Baywatch-style slow-motion run to ~be there~ in time, and sometimes it is already too late. Sometimes I put my hand in it. This is the "use case" behind Shittens (likely being studied at a business school somewhere), slogan: "because poop is gross."

Over the summer, we were playing in the yard at Grandma and Grandpa's house, lots of little kids chasing bubbles and negligent aunties and uncles half paying attention, and a little voice piped up, "Po-op!" Sure enough, there, nestled into the lush blades of grass, was a little fawn-colored rissole of poop. It had tumbled out the pant-leg of my daughter's romper as she ran about undie-less post-swim. I reverse-baggied it, as I do twice a day for our dog, and carried her inside in the patented arms-reach poop-hold. I then peeled down the pants — always the worst moment of the poop cleanup — got to work with a pack of wet wipes, built a bridge, and got over it. It was honestly not the worst thing I dealt with that day.

So the Shittens are interesting. They are, basically, two wet wipes stitched together into the shape of an oven glove, but much heavier and damper than your regular wipe. They also have a lemony scent that makes you think: I wonder if I could use this on my face as a sheet-mask? (No.)

They pull from the packet easily, and then there is a small struggle reminiscent of The Mask as you try to get the opening to ~accept~ your hand. Had I an assistant, like a surgeon, this would be easy. I could just raise my hand, "Nurse, Shitten." And my assistant would apply it to my hand. But it is harder when the bum you are attempting to clean is a pocked flank bent on escaping your grip. Moms, you know what I'm talking about: that tensed bum that is trying to roll and run away from you across virgin bedsheets covered in poop. This muscly little toddler bum is doubly tricky, because you want to hold the ankles with your dominant hand, but holding them with a Shitten makes things slipperier. Honestly, as soon as you unfasten the diaper, my son moves so quickly* there are simply not enough fast-twitch muscle fibers in my wrist to deal with it.

*If your baby likes to stay still as you swoosh the poop out of crevices and from around outcroppings, I should think the Shitten is very nice.

Still, cleaning a butt is an improvisation. Having given one swoop with the glove, I was left to ponder how to get more out of it — doing a pass with the back of your hand is weird, so I would take it off and fold it in half, transforming it into... a wet wipe. In one diaper change, I went through three Shittens. (Which would be a great way to rate blowouts: "It was a four-Shitten situation.") It was, let's say, a lot of waste. And yes I'm saying that as someone who orders 140 diapers in two sizes on two-day delivery by yelling at an Amazon spy-node in our living room, but won't you think of the Earth.

The packet of Shittens in fact suggests use by "babies, pets, and adults." As with all things, 21st-century man has managed to make it all about him. This is why wet wipes are clogging our sewer systems. But also: pets? I have never cleaned my dog's butt, though I have cleaned my share of poop off the floor during stomach upsets. It is... far far worse than a bit of baby poop. These use cases prompt the questions: Who are we? Do we all need shit mittens?

The philosopher Ernest Becker once said that we are "gods with anuses," by which he meant that man's intellectual capacity and self-awareness set us apart from all species, but that the filthy viscera of our own bodies brought us back to earth. I'm here to tell you that neither my 2-year-old nor my 1-year-old feel the least bit conflicted about their philosophical place in this world as relates to their need to poop. They manage to simultaneously believe themselves to be the center of the universe and also think that pooping, and telling strangers "I pooped in my pants," are funny and great things to do. To them, pooping is the superpower.

Two things happened during the great Shittens trial. For one, my daughter took several poops on the potty. This is revelatory. A poop deposited directly into a potty is a dream to clean up. You can use a single wipe and simply swoosh things clean. We are not ready for toilet paper yet, but there is hope on the horizon (::Mr. Hanky wave::).

The second thing is we gave away our beloved dog for a concert of reasons, including our children's safety, his anxiety levels, inadvertent neglect, and the fact that we came across a retired couple with a farm who fell in love with him. The decision involved broken hearts and sad last walks and difficult attempts to explain to a 2-year-old where the dog was going, like, here was one more thing to learn. Even after the handoff, I was disgusted at the situation — at the fact that toddlers and a dog were not manageable in the same universe at the same time. We can visit him, yes, but this stuff, this is the tricky mess of Real Adulthood. This, I hate.

People are right that there is a lot shit to clean up when you become a parent. You can stock your little diaper-change basket with all the wipes and mittens and ointments you like, but the trickiest stuff to clean up is the crap that sneaks up on you as you juggle babies and toddlers and jobs and pets, trying to do the best by each amid constant change. It is hard as fuck at times, but you adjust your grip, scream at the butt-cheeks "stay still!" and reach for another wipe.