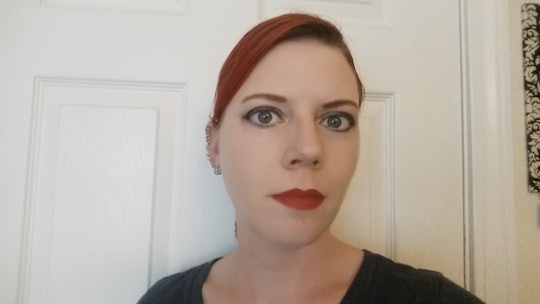 I Tried Taylor Swift's Makeup Routine For A Week, & Here's What Happened

Taylor Swift is probably the most put-together celebrity in the world. I dare you to find a picture of the woman without makeup. While she has, in the past, occasionally rocked a light, no-makeup look, I bet you can't find a shot of her truly bare-faced. Heck, she won't even leave she gym unless her signature black eyeliner and red lipstick is on point. That's some commitment to perfection she's got right there.

Then, on the other hand, you have me. My signature look can best be described as "I woke up like this, and it's pretty obvious." I am a lazy person who works from home, and since my son was born, I’ve cared less and less about what people think of me (showing your vagina to a hospital room full of strangers can have that effect on a person). Back when I worked outside the home, I wore makeup daily, but now, I only bother with it if I'm going to a party or a family gathering. Basically, I’ll wear it any time I might have my picture taken.

What this means is that I've forgotten what it feels like to look put together in casual settings. Nobody hits on me at the gas station, which is awesome, but it's a slippery slope from lazy Sunday to full-on cat lady. Would looking as flawless as Taylor for a week change my outlook on makeup?

For a week, I was going full-on Taylor. Call me a Swifie, because I was down for it all: the red lips, the hair, the cat eye. No eyelash would be left uncurled. No pout unperfected. And as a grown-ass woman who is decidedly older than Taylor (never telling how much!), how would I feel rocking her early-20s look?

I gave it a week, and this is what I learned.

Day One: Well, This Is Different

I started my experiment on a Saturday. I picked up some liquid eyeliner at Target the day before, and was disappointed when I opened it and discovered that rather than a marker-style tip, it was a long, dippable brush, more like nail polish. How on Earth was I supposed to draw my wings with eyeliner if I couldn’t steady my hand on my cheek? It took 20 minutes, two tissues, and seven cotton swabs to get this “ugh, fine, whatever” look.

I was meeting friends at a dive-y Chinese restaurant for karaoke, and figured it was the perfect place to start, since it was dimly lit, and I was already planning on humiliating myself in front of strangers. Nobody said a thing about my face. I literally didn’t own any lipstick before this, and I haven’t touched liquid liner since I was 16. When I do wear makeup, it’s eyeshadow and lots of it — nothing else.

So why wasn’t anyone saying anything? Did they really not notice a difference? Is makeup that inconsequential? Or did I look so terrible that they didn’t want to embarrass me by mentioning it, or be forced to lie? I finally broke down and interrupted two friends (one male, one female) mid-conversation. “I’m sorry, I have to explain myself,” I told them. I felt like I looked really weird, and everyone else probably did, too. Instead, they both said I looked good. I didn’t buy it. I felt like I was wearing an unflattering Halloween costume.

Day Two: That’s A Lot Of Look For Michael’s

Sunday is a day of rest. If you’re Taylor Swift, that means baking cookies with Karlie Kloss. If you’re me, that means running errands while listening to NPR quiz shows on the radio. It is also my least good-looking day of the week, where I avoid even showering unless I actively smell, because who gets dressed on Sundays? But I wondered: How would Taylor’s face look when coupled with my sloppy bun and hoodie?

There was only one way to find out.

I was already getting the hang of the eyeliner, and only used two cotton swabs to mop up my mistakes this time. (Score!) I felt oddly put together. My hair and clothes were their usual weekend way-too-casual, but with my face painted, I felt like it took all the focus off of the rest of me. Lookin’ good, Lazy Lady! The lady at Michael’s was super friendly, but I’m not sure if it was because I looked fancy, or because arts and crafts store employees can be like that.

Day Three: Switching It Up

I didn’t feel like myself, and I didn’t like it. The eyeliner was so out of place on my face that it was like looking at a stranger in the mirror. I decided to try another Taylor look. I thought maybe adding some eyeshadow would make the eyeliner look less severe, but I felt like it came out looking like I fell face-first into counter at Sephora. This was way too dramatic for the elementary school pick-up line.

After picking up my son, we stopped by the grocery store to grab a couple items and headed towards the self-checkout, as I always do, because I’m antisocial. An employee approached me and offered to scan my stuff for me, at the self-checkout. What? Did I look like I was too important to scan my own cheese? I go to this store multiple times a week (because I’m a terrible planner) and this had never happened before. I felt like the makeup was making me more “visible.”

Once I’d paid, he actually offered to bring my bag out to the car for me. This was not one of those high-end grocery stores, either. And it was one bag. Clearly he thought that I was Taylor herself, wearing a wig and toting a random first-grader around suburban Massachusetts for some reason. Is this what life is like for celebrities? Does anyone ever just let Taylor live?

I still wanted to work some eyeshadow into the look, even though we were on day four and I was halfway through this week's ~activities~. Normally, if I have one drop of makeup on, it’s going to be shadow, and having stark lids just didn’t feel right. So I added a touch of blue, a shade I don’t normally wear. Just a touch! Less shadow was surely the key!

After adding the blue, I felt like I looked like Unnamed Cast Member #4 in a really bad '80s movie. I’m starting to think that this look just can’t work on me, for unknown reasons. Face shape? Lack of fame? Who knows! Taylor wears the same damn thing and she looks glamorous. It’s not fair.

Day Five: Back To The Basics

I finally accepted that the shadow wasn’t working and went back to bare lids. I was getting the hang of the liner now, and finally starting to feel like daily makeup was “normal” for me. I did begin to feel like my full face of makeup drew attention to my very not-done hair, though.

Should I start doing my hair each morning, too? This is already taking me an extra 10-20 minutes every day, time that could be better spent sleeping or staring at my phone. What more do you want from me, Taylor? I can’t afford to hire a glam squad. I hope Taylor has a glam squad. I can’t imagine finding the time to write songs and post to Instagram otherwise.

There is lipstick on my burrito, you guys. Lipstick on my damn burrito. Am I supposed to eat this part? Throw it away? This is disgusting! How do lipstick people even live? I can’t wait to stop wearing lipstick. It feels gross, it gets all over everything, and I swear it’s actually drying my lips out. And I feel like it makes my lips look small and my teeth look yellow, but that could just be a red lipstick issue.

I like a big finale, so I decided to go bananas for my last day of this experiment. I walked out of the bathroom and my husband looked at me like I was wearing a dead crow as a hat. My mother-in-law, there to babysit my son, remarked on how the liner went “all the way around” (she’s not much into makeup). I was glad it was the last day.

I have to say that I almost liked this look. I feel like it looks better on me than any of the others. My lids were pretty much covered, which is more my style, and when I darkened the lipstick by mixing in some black eyeshadow, I felt like the color looked better on me. We went to visit a couple we’re friends with, and our friend’s husband actually complimented my eyeliner. I explained what I was doing, and he said he’d thought it was weird that I was wearing lipstick. I might actually consider doing this again if I had someplace appropriate to wear it. A concert, maybe?

So what did I learn by channeling Tay-Tay for a week? That lady is very committed. I wonder how often she runs out of butter or something and considers just dashing out the door with a naked face. Or maybe she just never has a naked face. Maybe her makeup is the first thing she does in the morning, before coffee or peeing or checking her phone. But she sort of has to. Any “off” moment she has will be documented by the paparazzi, which made me eternally grateful the only person chasing me around all day is my son, and that’s only because he wants a snack.

As for me, I like the invisibility that a bare face affords me. With makeup, I got more attention, and I wasn’t exactly thrilled by it. While some people would prefer their groceries to be rung up by a cashier, I’d rather do it myself and avoid unnecessary interaction with a stranger. Small talk is not my thing, and I feel weird being “served,” which is how I felt when we were in public and I was rocking my best red lip. Mimicking Taylor’s makeup routine didn’t make me a superstar, but it showed me how easy I take my hermit lifestyle for granted.

Also, liquid eyeliner is hard, lipstick is gross, and anything that threatens burritos should be banned. I’m super glad I’m not a pop star.