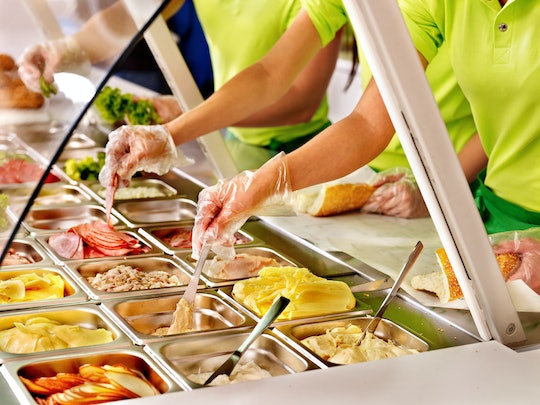 When I was growing up, my mother always packed my lunches. She'd stuff my Wizard of Oz lunchbox full of goodies: I always had fruit, a snack, and a little juice box. Sometimes I'd get a sandwich, but more times than not, my mother would fill my Thermos (specifically my Wizard of Oz Thermos) with things like chicken salad, egg salad, macaroni 'n cheese, or canned spaghetti. My lunchbox offerings were peak '90s meals. She gave me something different practically every day because she wanted me to have something special, and the '90s were filled with special: pre-packaged lunches, canned spaghetti and ravioli, mac 'n cheese, sweets, fruit cups — you name it, I got it. And looking back on '90s school lunches in elementary school, I miss those days. I'm not exactly stocking up on my '90s favorites at the store, but what if I could? At my editor's urging, I decided I'd try to eat like I was in elementary school again. And going into it, I was pretty excited. I mean, with all of these options, how hard could this experiment be?

Look, I don't want to give anything away, but turns out this experiment was much, much harder than I thought. Unsurprisingly, I don't eat food like these anymore, and I definitely don't serve it to my daughter. Thanks to my horrid acid reflux, my stomach was not prepared to process all of the sodium, sugar, fats, dairy, and carbs, either.

For the sake of my stomach and my sanity I limited this exercise to breakfast and lunch. As I’ve already mentioned, I rarely eat processed foods anymore, and I wasn’t sure my body could subsist on overly sugared and salted foods (especially since I'm also a distance runner). But more importantly, I limited myself to these meals because when I was a kid, the only meals I really ate as a kid were breakfast and lunch. Dinner was whatever my mother cooked, and she made lots of meals from scratch.

So I settled on a compromise: I reasoned I'd switched things up for lunch, but my breakfast would stay the same: one strawberry-filled sweet treat reminiscent of my earlier days, and a cup of coffee. (The latter is, of course, an addition to my '90s lunch, but there was no way I could make it a week without my morning coffee.)

Alright, alright, alright: I know I just got done raving about my mom’s culinary creativity — and the fact I rarely brought sandwiches to school — but PB&J was still a staple and it felt wrong to start anywhere else. Plus, I was already making a sandwich for my daughter, so I figured I'd kill two birds with one stone.

The good news is PB&J is predictable. I knew what it'd taste like, and I knew what I was getting into. It's also still relatively healthy (at least compared to some of my other meals) so I could count on my stomach reacting fine to eating it. Unfortunately, being predictable also leaves a lot to be desired. Lunch on day one was really, really boring. I tried to channel the excitement of my youth, but to no avail. However, my PB&J sandwich and sliced Gala apple worked wonders: I was full, satisfied, happy, and fueled to take on the rest of the afternoon.

Overall rating: 4 out of 5 gold stars

I started day two with more enthusiasm than I probably should have. I was delighted and totally excited to have a reason to eat a pre-packaged little sandwiches again! OK, scratch that. I was giddy as hell.

I started off lunch by stacking each sandwich up like I did back in the day. I balanced one cracker in the middle of the container, on the plastic “X” formed by the four compartments, then grabbed one turkey round and one square of cheese. (In my opinion, this is the only order in which you eat your sandwiches. And yes, I feel really strongly about this.) And then things quickly fell to pieces.

I took a bite and the order didn’t matter — at all — because this was absolutely gross. Maybe it's because I'm older and wiser now or because my palate has grown, but the turkey was wet and slimy and the cheese was soft and completely tasteless. TBH, the only redeeming part of this meal was the cracker. Not only did it give each bite some texture, I was actually thankful for each over-salted circle because it gave some flavor to this hospital-grade meal. The sweet treat didn't hurt either.

Otherwise, the whole meal left me completely unsatisfied. On top of that, I was still starving. However, the silver lining of day two was I didn’t have to think about this meal at all. I didn’t have to prepare lunch, and I didn’t have to do anything beyond open the box and stack the sandwiches. (I still feel strongly about the order, FYI.)

Overall rating: 1 out of 5 gold stars

Alright, let me start by asking you a question: Does that sound like a good combination to you? I mean, when you're 5, maybe — because when you're 5 chocolate milk goes with everything, including cheese and chips. I thought that enjoying these three staples together would've been a complete culinary home run, but I am here to tell you that, at 32, that combination is so, so disgusting. It's not that each element of the meal was gross — on their own, they're perfect! — but eating mac 'n cheese, apple chips, and chocolate milk together makes for one disgusting combination.

The dairy, sugar, and sodium sent my body into a tailspin. All afternoon I felt nauseated and bloated and all around uncomfortable. And the chocolate caused me to burp up bile for hours. Honestly, I have nothing good to say here. At all.

Overall rating: 1 out of 5 gold stars

By day four, I was actually dreading wrapping up the rest of this experiment. My stomach was a mess, and I kept burping bile into the back of my throat. I wanted to throw in the towel. I wanted to give up. Hell, I considered quitting, but instead of opened a can of heat and serve spaghetti and meatballs and rinsed off some grapes. I threw caution into the wind and went for it.

And you know what? Despite the fact that red sauce is my kryptonite — at least where my reflux is concerned — this was the least difficult meal I'd eaten in days. It was also the most enjoyable. I mean, make no mistake, this isn't going to become a staple in my household for lunch, and it was a far cry from an authentic Italian experience, but it was acceptable and the combination of carbs and mystery meatballs filled me up. The good news I was able to stomach this mean, and nothing felt slimy or gross.

Overall rating: 3 out of 5 gold stars

You know what? I shouldn’t have left this meal for last. I hated it back in the day, and I knew I would hate it now. Cold cheese, mushy bread, and mustard? What the hell was there to like? But I bucked up and made it anyway, and then I sat down and took a bite. That was, coincidentally, the only bite I got through.

Yep. I took one bite, and I was done.

To be totally honest, one bite was way too much. I immediately heaved and gagged. I spit out the mush in my mouth and threw out the rest of the sandwich. After a week of subpar meals, acid reflux, and living in a constant state of "am I going to throw up today?" I just couldn’t stomach it. I just couldn’t do this one.

At the end of this experiment, even though my stomach felt betrayed and disgustingly sour, I still lived to tell the tale. Sure, it was an unpleasant five days because I rarely eat these foods anymore — most of the ingredients (red sauce, fatty foods, fast foods, and chocolate, to name a few) are not part of my gastroesophageal reflux disease diet (GERD) — I still felt full after each meal.

It was fun to take a trip down memory lane, but trust me when I tell you I will never, ever try this again. I'm pretty sure I'll probably never buy any of these meals or snacks again — for myself or my daughter. I know better now that I'm older, and there are so many other ways to make lunch time exciting. Sure, when she gets to be school-aged we'll have to revisit lunchtime, but I can promise she'll never lay her hands on slimy meat, mystery meatballs, or cheese-and-mustard mush, so long as I can help it.