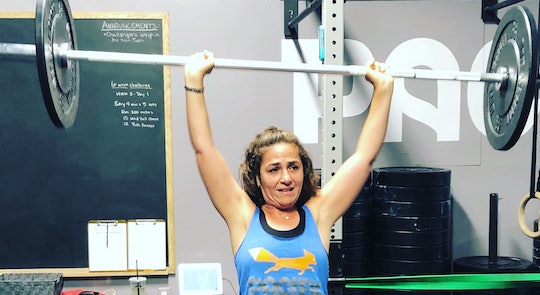 I Tried The Cross-Fit 6-Week Challenge, & Whoa Mama, I Came A Long Way

On the far side of running multiple marathons and having children, Catherine Pearlman wanted to do something to get herself out of a postpartum fitness rut. Enter: the Crossfit 6-week challenge.

Most days, I wouldn’t trade motherhood for a billion dollars. I’ve loved watching my children develop, gain confidence and explore the world. I cherish all the snuggles, road trips, hours of watching The Great British Baking Show and laughing hysterically at stupid inside family jokes. That said, I would happily swap my postpartum falling-apart body in a heartbeat.

I used to run to keep in shape. Before having kids I ran two New York City Marathons and a hundred other races. Sadly, running came to a screeching halt with the pain from a degenerative disk in my lower back. The 40 pounds I gained during two pregnancies (I didn’t learn my lesson the first time) and all the lugging of children on my hip and the heavy diaper bag did me in. Tennis also used to be a good way to exercise and scratch my competitive itch. But that ended after my second elbow surgery. Another depressing toll motherhood had taken on my body.

Busy taking care of kids, building my practice and launching a book, my physical well-being was set aside. I knew I needed to find something that wouldn’t aggravate my injuries but would help me feel stronger and restore my lost physically confidence. A friend mentioned she was doing the six-week CrossFit challenge at a nearby gym. She said it was free. Well, sort of free. If participants met their goal of 6 percent body fat loss at the end the $600 fee would be refunded. I was intrigued.

I’m more of a sporty got-to-be-outside kind of exerciser. But life was stressful. I didn’t have a lot of time. I didn’t have a ton of motivation, and I felt like I was in a deep rut. A friend and a monetary motivation was what I needed to jump start my fitness again. I hastily enrolled online, did my weigh-in and anxiously waited for the first class to start. Of course, in the lead-up I did what I shouldn’t have — I Googled CrossFit. Big mistake. Huge! Turns out people are fanatical about the sport. They wear special shoes. They participate in daily workouts called WODs and they talk a lot about all things nutrition and fitness.

No one knew what they were doing, and that was comforting.

On the first day I tentatively walked into the gym (called a box). It’s just a bare bones structure of metal bars surrounded by free weights, barbells, big boxes, rowing machines and medicine balls. For the first three weeks of the challenge the newbies are segregated in special classes so we can learn the ropes and the lingo. Every move has a name, like “squat snatch,” “the clean,” or “the split jerk.” At the beginning of every class the coaches review all the moves and incorporate them into the warm up. No one knew what they were doing, and that was comforting.

Workouts are meant to be constantly rotating. They are short but insanely intense. Participants are meant to push the body beyond where it wants to stop. That’s a different place for everyone. However, we all felt spent from our respective effort. At the end of the workout there’s a blackboard where we report on our daily stats. How many squats were achieved in the prescribed time or how fast overall the workout was completed. I’m sure at lots of gyms this blackboard symbolizes fierce competition. At my gym, it seemed (thankfully) that no one really cared. This was more about individual accomplishments. Just like running a 10K, I was in a competition against myself which took the pressure off.

Members of the challenge are asked to come to the gym at least three times per week. The only class time that would work for me was at 7 a.m. Waking up at 6:20, hustling to get dressed and be at the gym on time was probably my biggest challenge. I am not a morning person. Even my kids are scared of me for the first two hours of the day. Somehow, over those opening three weeks I made it.

At the first weigh in I was given a low-carb high-protein diet to follow that had three meals and two protein shakes. I don’t drink shakes or eat dairy, so the diet wasn’t working. For me, the challenge was about making smarter choices at meal times, eating less and about committing to fitness at least three times per week. So I decided to ditch their diet in favor of Weight Watchers. I knew I could lose weight on their plan as I had done it before.

I started to recognize people, and the coaches learned my name and how to spell it correctly for the board. Walking into that gym box sometimes felt like Norm walking into Cheers. That support kept me going.

One of my concerns joining CrossFit was that the coaches would enforce the WODs without adjustments. I needed to be careful with my back and my elbow. Injuring them again for the sake of a workout wasn’t an option. But to my surprise, everything at the gym is scalable and adjustable. So if I can’t do a push up I can do a ring row instead. If I can’t clear 24 inches on a box jump, I can do 18 without a fuss.

After three weeks I graduated to the regular CrossFit classes with the experienced members. Again, I panicked. I wasn’t going to be good enough. I was going to stick out and look like the weakling I really am. But it was nothing like that. The members were supportive just like the coaches. If they finished before me they called out my name along with, “Awesome job!” or “You’re almost there!” I started to recognize people, and the coaches learned my name and how to spell it correctly for the board. Walking into that gym box sometimes felt like Norm walking into Cheers. That support kept me going.

At the end of the six weeks there was a final weigh in. At the halfway mark I was down 3 percent body fat. But in the last few weeks I was traveling a great deal for work and my father was seriously ill. It was a tough time, and I was pretty sure I wasn’t making the cutoff. Sure enough, I was still at 3 percent. But instead of feeling defeated, I felt like a winner. For six weeks I worked out at least three times per week, even on the road. I ate more reasonably, and I felt happier (hello, endorphins!).

After one particularly brutal workout I smiled and asked a coach if the point of the workout was to make my arms too sore to lift food into my mouth. No, he said with a serious face. “The point is to make it so everything is easier.” How poignant. That’s exactly why I was there. All of that lifting, rowing, squatting, lunging and jumping was meant to make me stronger and more capable to do all of my everyday activities. It did that and more. In just six weeks I remembered why I liked to exercise and saw the benefits physically and emotionally. So, I took my $600 from the challenge and used it to enroll as a member of the gym. After every workout my husband asks, “How was it?” My answer is always the same.