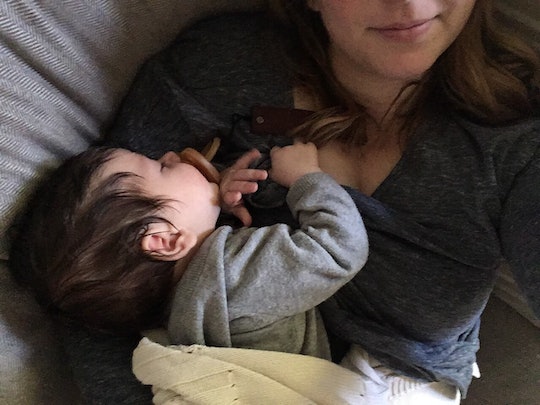 I Tried The No-Cry Sleep Solution For A Week

I’m a mom of three, but I’ve never used any kind of sleep training on my kids. With my first two, I basically breastfed on demand and walked around with my babies until they fell asleep. It wasn’t convenient or even really enjoyable most of the time, but I thought the only way to sleep train a child was to let them cry it out, and I didn't think that wasn’t the right choice for our family.

Now that I have a third child, I’m not sure my approach is realistic anymore. Bedtime is already chaos with two toddlers. Adding an infant who only falls asleep when I walk around the house with him for half an hour (or more) only makes things more difficult. Things have been so tough at bedtime lately, I’ve been struggling to hold onto my patience.

My baby just reached the 4-month threshold, which is notorious for being the age when sleep regression is most likely to take place. The theory is that babies begin to sleep like adults at this age, making it more difficult to put your baby to sleep. From everything I've read about sleep regression, I've learned that if you don’t make new habits at four months, your baby pretty much gets stuck in his old sleep habits. So I decided to give another form of sleep training a try by trying out the No-Cry Sleep Solution.

When a friend recommended the No-Cry Sleep Solution, which has been proposed as a more gentle sleep training alternative to the infamous cry-it-out method, it sounded like the perfect chance to make some changes to our routine. I borrowed the book, did a lot of research online and prepared for 10 days of a strict bedtime routine.

Elizabeth Pantley, the author of the No-Cry Sleep Solution, offers several suggestions for sleep training older babies, which she classifies as between the ages of 4 months and 2 years old. Pantley proposes that parents develop a set bedtime routine and stick with it to change your baby’s sleep associations, so they can go to sleep without nursing or rocking. The author suggests introducing a lovey, using cue words to signal that it is bedtime and using music or a sound machine at bedtime.

I started bedtime on day one excited to make changes to our routine. My husband took over taking care of the big kids when he got home for work and I started putting my youngest to bed at 6:30, because Pantley suggests an early bedtime.

The second I put my son down, he totally freaked out.

I turned on a dim lamp in the nursery, where my son’s crib has been sitting empty since he’s been sleeping with us, and started the routine. I changed his diaper, dressed him for bed and turned on the sound machine. I nursed him until he was drowsy, instead of waiting until he had fallen asleep. Then I swaddled him and put him in his crib awake with his appointed “lovey."

The second I put my son down, he totally freaked out. I offered him his pacifier, which I’m pretty sure is something Pantley advises against, and stroked his hair to help him settle down. It took a few minutes, but he did fall asleep without having to be bounced around the house.

He slept for a few hours and then nursed again, eventually falling asleep in our bed. I didn’t really feel weird about that, because Pantley is very generous toward parents who are still OK with co-sleeping. Her method is fairly flexible, and we just wanted to teach our son to go to sleep without having to rock him to sleep or bounce him for hours at a time.

Day 2: A Not So "Gentle Transition”

On day two, I felt like I was more comfortable with our routine. I repeated the same steps as the night before and my son dozed off immediately. I left the room and helped myself to a glass of wine. Of course, my son woke up as soon as I sat down with my alcoholic beverage. I took it along with me and stood next to the crib, feeling utterly ridiculous with a glass of wine in one hand and my other hand stroking my son's hair and popping his pacifier back in his mouth. He wasn’t calming down, so I got the genius idea to gently nudge his crib so it rocked ever so slightly. It totally worked, but I’m not sure I recommend gently bouncing your child in his crib while you sip on a glass of wine. I'm sure this isn't what Pantley meant when she suggested a "gentle transition."

Days three and four were basically a repeat of day two, wine glass and crib-bouncing included. Things had gotten a little bit easier, even if my son was still a little high-maintenance at bedtime. I was hopeful that this would be a slow transition, and that I would soon be able to pull one of his arms out of the swaddle as a first step towards sleeping swaddle-free.

My youngest was not happy with my rushed bedtime routine.

Then we hit a bump in the road. My husband had a commitment outside of the home, which meant I was responsible for bedtime with three kids 4 and under without his help. I didn’t even get my first kid into his pajamas before the water works started. One kid bumped her head while getting in bed, while the other insisted on using the bathroom approximately 40 times between 7:00 and 8:00.

My youngest was not happy with my rushed bedtime routine. I was losing my patience, and I knew that staying committed to our new routine wasn’t worth it if I was yelling at my big kids. So I grabbed my baby from his crib, popped him on my boob, and read books in bed with my big kids until everyone settled down. My son fell asleep on me, which is totally against Pantley's rules, and I brought him to bed with me once my daughters finally fell asleep.

Days 5 and 6: Getting Back On Track

I spent the next two nights trying to get my son back into his routine. I still don't understand how one night could throw everything off, but it totally did. I nursed my son at least four times both nights before he finally fell asleep around 8:00. I know it’s probably bad parenting to be annoyed with a 4-month-old for failing to adhere to his sleep training routine, but I was annoyed.

Days 7 and 8: Well, That Explains Everything

On the morning of day eight, after a few difficult nights, I noticed my son had two teeth coming in, which partially explained why it had been so tough to sleep train him. Knowing he was teething didn’t really fix anything, but it did give me a bit more compassion. I decided I would stick to my commitment to avoid rocking him to sleep, but I was going to allow him to nurse as needed to offer him comfort for his pain.

We found a rhythm that night. It isn’t perfect, but it is working. I lie in my bed with my son and nurse him until he's drowsy. Then I read a book while he drifts off to sleep. Some nights, he wants to nurse again. Other nights, he needs me to stroke his hair until he falls asleep and I’m OK with that. I make sure I start early enough so that I can read to my daughters after my husband gets them dressed and settled into their beds.

Even though I’m not carrying out the steps of The No-Cry Sleep Solution perfectly, I do feel that I have learned a lot from the experience. I was able to move away from bouncing my son to sleep, which was seriously exhausting since it typically required walking him around our house for half an hour. I also feel like I better understand how to avoid getting into a habit of having to rock my kids to sleep every night for the first year of their lives. I hope that with time, we can transition him into his crib using Pantley’s suggestions and then away from nighttime feedings. For now, though, I am really happy with the way things are progressing.