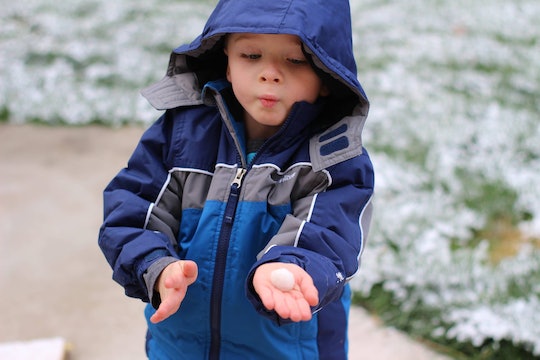 Reggio Emilia Made Me A Much Better Mom

I haven’t always had the easiest time bonding with my son. He had a difficult birth, which was followed by my struggle with postpartum depression and anxiety, so I never quite felt like I could get the hang of parenting him. I'd often heard of parents who loved how their children gave them a fresh new way of looking at the world, and I hated that I never felt like that. I felt like I was constantly curbing impulses and imparting rules, trying and failing to create those moments of magic with my son.

When my son was 3 years old, he started preschool. I enrolled him in a preschool that is inspired by Reggio Emilia, an approach to early childhood education that encourages children to take the lead and follow their curiosity and creativity, rather than sticking to a set curriculum. I'm so glad I did, because using the Reggio Emilia method helped me bond with my son and totally transformed the way that I parented him.

I had spent the first few years of my son’s life being relentlessly hard on myself. I felt like I had messed things up by having postpartum depression, so I tried to make up for it by pushing myself to be exceptional in other ways. I combed through the pre-K standards booklet, studying all the things my son would need to know in the years to come. I tried to come up with curricula to help give him a leg up, even though he was barely verbal. I taught him letters and numbers, and talked about weather patterns and how animals give birth within their own species and how a community works and where we lived and what different types of coins were and what a routine was and how his operated.

This was back when I still thought that maybe I had a shot at becoming a homeschooling mom, because I was sick with the thought of leaving my son for any amount of time. I wanted to make up for the time I felt I lost in his first year while I was in the fog of depression. Yet it became clearer every day that I was not a skilled teacher. It would be best for him to be in preschool, to have some structure, to have someone who knew what they were doing.

I fell in love with my son's Reggio Emilia preschool. (Reggio Emilia is named after the Italian town where it was invented following World War II, after the other schools in the area had been destroyed.) To be honest, I didn't entirely grasp the methodology, but I loved the school itself. There were large glass walls where they could peer into the common areas, and where parents could sit and observe classes. I soon realized this was an integral part of the school's focus on communal learning, and my son would truly be able to take in all of his environment to help him learn. He could go out and pick berries from the edible bushes in the outdoor play area. He could eat wonderful meals prepared for them each day in a beautiful kitchen. I felt comfortable leaving him there, and he felt comfortable staying.

As my son explored the things that interested him, I began to see his personality take shape. I saw his love for learning blossom, and I felt lucky and grateful that I got to be a part of that experience for him.

Once he started, however, it became clear that this preschool offered more than just a safe place to drop off my kid. Reggio Emilia takes a collaborative approach, where children get to take charge of their education by following their interests and adults support them and learn alongside them. Unlike the Montessori method, which is also more child-guided, Reggio Emilia focuses on art and creativity, and the teachers match long-term projects around the children's passions.

I was constantly speaking with my son's teacher about his interests and moods. Whatever he was interested in at the moment became the crux of his education. He learned about the fire engines he saw pass on the streets below his classroom, and as the berries became less plentiful and the weather began to change, he learned about life cycles and seasons.

One of the focal points of Reggio Emilia is that in addition to the parent and the actual teacher, the environment a child grows up in is considered a "third teacher." I was finally beginning to understand what that meant. I'd thought it had something to do with nature, but instead it was about the world around my son. Instead of trying to explain it to him, I could simply let him explore it. I could help him discover new things and follow his interests. It helped me bond with him in a deeper way, allowing me to tap into my own childlike curiosity alongside him just as I had always wanted.

Reggio Emilia gave my son confidence and independence — and in the process, it brought me closer to him.

My son became obsessed with steam engines, so we brought home book after book from the library. We went to museums and discussed engineering, which led to us discussing how tunnels were made, and how inventions went through many prototypes. I began to see his personality take shape as he explored the things that interested him. I saw his love for learning blossom, and I felt lucky and grateful that I got to be a part of that experience for him.

Reggio Emilia gave my son confidence and independence, because he was allowed to follow his own path without being forced to embrace subjects he wasn’t interested in. He was able to learn that impossibly long list of need-to-know information I had once found so daunting, simply by observing the world around him. We dove into the world of gardening together, learning the names of plants in guidebooks as we went on hikes. We bonded over his love of cooking, which was inspired by him trying new foods at his preschool. And in the process, it brought me closer to him. I was no longer a rigid teacher, but his partner in learning. It’s a role I hope to keep for as long as he’ll let me.