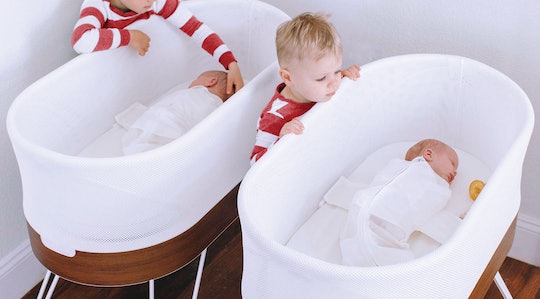 I Hated The Idea Of A Robo-Crib, But After Trying It I’m In Love

Swoosh-swah-swoosh-swah-swoosh-swah. The oceanic hum of my newborn’s SNOO lulled me into a deep sleep. We’d been using the SNOO Smart Sleeper bassinet for about a week, and I was finally getting used to, well, sleeping. I felt like I’d been unconscious for hours when I woke from a dream in which I was power-washing my bedroom walls with breastmilk. My shirt was soaked. I rolled over and checked my phone: 2:23 a.m. Impossible. I’d laid my 2-month-old down at 7 p.m.

Something must be horribly wrong. I hovered over the bassinet and watched my daughter pitch gently to and fro, blissfully unconscious, sucking rhythmically on a pacifier. She was alive and well as she entered her seventh consecutive hour of sleep. Seventh. She was 9 weeks old. I was in love.

It wasn’t love at first sight.

Of course it had sounded good 10 days prior, when I was lying in a hospital bed, struggling to keep my eyes open after a 15-hour labor so a restless infant could gnaw on my nipple. This was my second child; I knew what it was like to sleep on edge for months, or not at all, waiting for the next wild cry.

But when the SNOO arrived, in a box nearly as tall and heavy as me, I eyed it with distrust. Who and what was this usurper? It was my job to rock and cuddle my baby, mine alone. Crazy? Maybe. I was pitching on a sea of postpartum hormones, struggling to both bond with my baby and appease my toddler’s devastation at learning she does not actually reside in the center of the universe. So I let the SNOO sit in its box for five long, exhausting days.

Who and what was this usurper? It was my job to rock and cuddle my baby, mine alone.

I finally cracked during a particularly trying bedtime, during which I’d left my newborn screaming in her bassinet and my toddler screaming in her bed to stand with my head in the freezer. Perhaps the SNOO would help with the bedtime struggle, I reasoned, seeing as my toddler now refused to go to sleep until the baby was sleeping, and getting the baby to sleep, on her back, in a stationary bassinet, was like battling down Beowulf.

The next morning, I wrestled open the box, and my life changed forever.

The SNOO’s 20th century modern aesthetic is refreshingly minimalist — an oval bassinet made of dark wood and mesh balanced on long, delicate legs that call to mind bathing herons. It is an oasis of calm in a landscape suffering from an excess of bright plastic toys and severe toddler noise pollution. My partner and I often put it on when empty, just to luxuriate in its white noise.

Dr. Harvey Karp, the superhero/brilliant mind behind the SNOO, created this wonder in the hopes of attacking one of the root causes of postpartum depression and anxiety: sleep deprivation.

Generally, my daughter will fall asleep within minutes. Without nursing. As someone who comfort-nursed my first child for the 18 months of her life, and never actually figured out how to get her to sleep without the boob, this blew my mind.

Infants tend to sleep better on their bellies, Dr. Karp confirms, but unfortunately, as the Safe to Sleep campaign warns, this drastically increases the risk of SIDS and suffocation. Dr. Karp wanted to fix this problem, and so designed the SNOO Smart Sleeper, which meets all the safe sleep standards while actually promoting sleep and saving parents’ sanity.

Here’s how it works.

You strap your newborn into what looks, quite inarguably, like a straitjacket. Did you know that despite struggling against it at first, infants sleep longer with their arms swaddled straight along their sides? I didn’t believe it either, but it’s true. And maybe it’s demented, but I think the straitjacket looks adorable, and have a slew of photos and videos of my newborn strapped in, rocking the night away.

Once your baby is in the swaddle, you press a button, and voila! The SNOO works its magic, gently jiggling your baby to sleep to a soothing white noise soundtrack. Generally, my daughter will fall asleep within minutes. Without nursing. As someone who comfort-nursed my first child for the 18 months of her life, and never actually figured out how to get her to sleep without the boob, this blew my mind. My second daughter associates nursing with hunger, not sleep. Once she’s snug in her “snoodle,” as we affectionately, nerdily call it, a soft smile spreads across her chubby face, and she drifts into a long, sweet slumber. Generally.

My life is still peppered with long stretches of inconsolable wailing. But the SNOO helps.

Sometimes she fusses. Sometimes those little swaddled legs thrash in the air like a fin out of water. I don’t budge. The SNOO has four settings, and sensing the baby’s agitation, the white noise and motion both amp up, and then down again as the baby settles. My toddler has squealed with delight more times than I can count as I ignore the baby’s fussing and continue reading her a bedtime story. And the longer I use the SNOO, the more effective it seems to be. My baby, who is now almost 12 weeks old, slept for nine glorious, uninterrupted hours last night, and may have slept longer if I hadn’t woken her up in a state of panic and forced her to nurse.

This isn’t always the case. There have been times when the little button on the SNOO turned red, informing me that the SNOO had given up; it was time for mom to take over. My life is still peppered with long stretches of inconsolable wailing. But the SNOO helps. At night and during the day. When I have to help my 2-year-old climb onto the toilet, or cut strawberries into acceptable shapes so they can be served to tiny dictators. I can just lay my baby down, and she coos happily, running her chubby fingers over the mesh, or simply enjoying the SNOO’s mellow undulations. Life with two hands isn’t a dream; it’s a reality.

That is my love story. It could be yours, even if you’re broke, on unpaid maternity leave, like me, because you can rent it monthly for $3 per day. I find that it balances out because I stagger into fewer coffee shops, impulse-buying espresso while trying to rock a restless baby to sleep in her carrier.

More Like This
Experts Explain Whether It’s Safe For Your Baby To Sleep On Your Chest
Is The Hatch Baby Sound Machine Worth It? This New Mom Says Yes.
How To Get Boogers Out Of A Baby's Nose
Here’s Your Guide To Paced Bottle Feeding