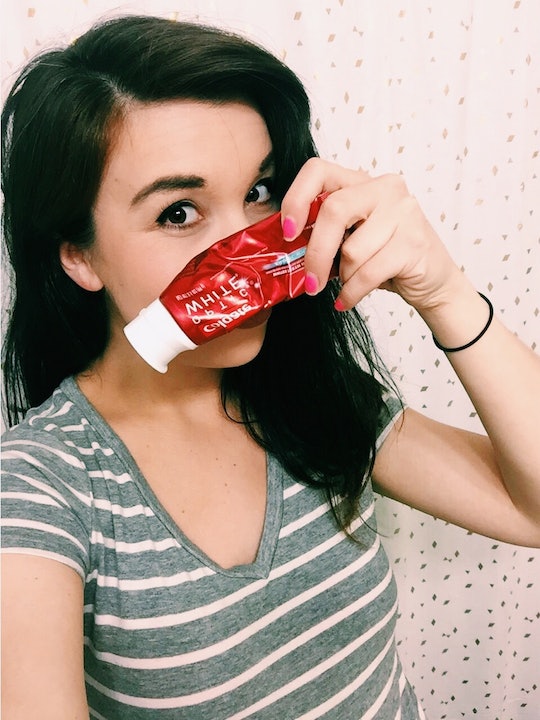 I Tried The Toothpaste Pregnancy Test, & It Worked, Sort Of

When it comes to taking a pregnancy test, the options can be a little overwhelming. There are so many on the market these days (and some of them can get fairly pricey). When I was trying to get pregnant, I remember standing in the CVS aisle, wondering if I should buy the digital or old-fashioned kind — you know, the ones with the two lines. If only there were an easier way, I remember thinking. Like a pregnancy test you could make yourself. Enter: the pregnancy toothpaste test.

Yep, this is a thing. According to a YouTube tutorial that's going viral, you can find out if you’re pregnant without ever leaving your bathroom, as long as you have some white toothpaste in stock. "Toothpaste pregnancy tests are not evidence-based to detect the hormone hCG that increases in pregnancy,” Dr. Carolyn Alexander of the Southern California Reproductive Center tells Romper (sorry to disappoint), nothing that men's urine can produce a similar result.

So, it's a folkloric test that has reportedly been around for decades, and used to be more popular among pregnant women when store-bought pregnancy tests weren’t as prevalent or readily available.

Here’s how it (supposedly) works: Squeeze a little bit of white toothpaste into a cup or a dish, and then add a few drops of morning urine. After mixing, the toothpaste will reportedly start to froth after a few minutes (and maybe even turn blue) if you are pregnant. The reasoning is that the toothpaste can purportedly detect the hormone human chorionic gonadatrophin (HCG), which is found in pregnant women's urine.

It sounded a bit too good to be true, so I decided to try it as an experiment. Because I'm 100% pregnant (I’m halfway through my 34th week), I figured I was the ideal subject for the experiment.

This morning, I squeezed about two tablespoons' worth of Colgate Optic White toothpaste into a plastic cup, spreading it along the bottom of the cup with a plastic knife. Then I caught some of my urine in a second disposable cup, making sure to do the experiment right after I woke up.

I poured a few drops of the urine into the first cup with the toothpaste, stirred it, and waited approximately three minutes. Sure enough, there was a bit of froth to the toothpaste; a few bubbles began forming around the edges, and it took on more of a liquid consistency. However, my toothpaste never turned blue — it remained white the entire time.

It’s worth noting that doctors and pharmacists have shed plenty of doubt on the validity of the toothpaste test. Pharmacist Stuart Gale told HuffPost UK that the real reason the toothpaste/urine combo fizzes is because of the acid in the urine — not the presence of the pregnancy hormone HCG. “The more acidic the urine is, the greater the fizz,” Gale said. “Whether or not a person is or isn’t pregnant wouldn’t make any difference.” (Urine acidity usually has to do with a person's diet, not whether or not they're pregnant.) He added that the test is really just “a bit of fun” for someone who thinks they’re pregnant, and shouldn’t be taken too seriously.

The moral of the story? It’s definitely a fun science project, and if you like watching things fizz and foam, it'll take you right back to your Mentos-in-soda days. But the toothpaste test shouldn’t be used in lieu of a store-bought pregnancy test or bloodwork from your doctor’s office — not if you want firm results, that is. So if you think you might be pregnant, save the toothpaste for your teeth and pee on a stick from CVS instead. It might cost more money, but the results will certainly be easier to understand.

This article was originally published on July 27, 2017