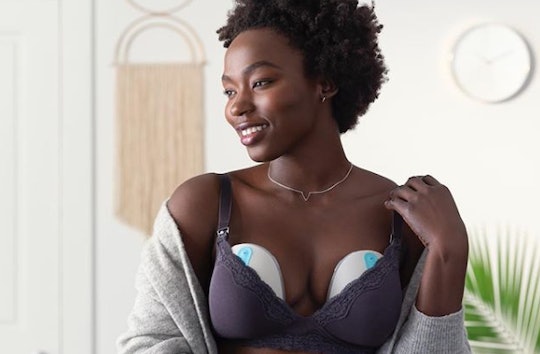 I Tried The Willow Wearable Breast Pump, & The Hype Is Real

I've been in love with the idea of the Willow wearable breast pump since I heard of it back in 2017. Those days were rough. It was my first-time breastfeeding, and we fed on demand, so I often felt like I was tethered to the baby. I lived for those brief moments that I had enough milk in the fridge to hand my son over to my husband and leave the house.

At the time, there was no designated space to pump at my work (despite the legal requirement for workplaces to have those types of resources for nursing moms), the sounds the pump made while plugged in were embarrassing, and sitting near a window with my boob out felt awkward during pumping sessions — especially since there were a few times folks walked in on me. I hated pumping, but keeping my baby breastfed was worth the discomfort.

Fast forward two years and I’m on my second nursing journey. It’s much smoother than the first go round. I work from home and my time away from baby is limited, so I hardly need to use my full-sized pump. Still, there are moments when I take trips for work and the frustration of finding a discrete place to milk myself is no less of a burden. Early this year, I was in New York for almost a week and had to use my hand pump every couple of hours — I would prefer not to repeat that, ever again. Needless to say, when I found out I’d have a chance to test out the Willow wireless breast pump I was excited as hell.

The newest model has a peek-through window so you can see how much milk you are pumping, and clear flanges to help with latching. The main thing about it is it's wearable tech: you put it on, and go about your day.

It was pretty cool! The Willow pumps fit into my bra and the suction is light, yet persistent enough to trigger a letdown similar to baby. Speaking of, the bra you wear matters. The pump has to be able to fit inside of your bra so it's not going to be good for low cuts or push-ups. Your best bet is one of those comfy cotton bras or a similar breathable material like a nursing bra. It’s a little harder to make sure your nipple is aligned correctly when it’s in your bra than with your typical conical pump flange, though this is something you learn.

For those who need a little more stimulation, you can increase or decrease the speed of suction. It just so happened that the speed was a nice neutral for us. I will say the Willow's suction is considerably lighter than my double-breasted hospital grade, even on its highest setting, so folks who aren’t very responsive to pumps may not do as well with the wireless pump.

While it’s working, you can hear the shift from “gulping” to “swallowing” as the letdown is triggered. The sound was so light, I wasn’t sure if the pump was working at first. It was a great improvement from the loud mechanical farm milking sounds of my usual pump.

There was a lot I wasn’t sure about at first. The manual was pretty extensive — it had a bit of a learning curve, as with breastfeeding as a whole — and I’m one of those folks who feels compelled to read them from start to finish. Thankfully, the app has quick instruction videos that show all of the information in the manual in a way that’s more accessible for visual learners.

That information came in handy when I ran into my first problem. The unit I was sent seemed to have some type of issues with suction: instead of all of the milk going into the storage bag, it would back flow and stay in the main canal. As a work-from-home mom, this was no biggie. But had I worked away from baby, as I had with my oldest, I would’ve been in a state of panic.

I initially though it was due to user error, so I connected with Wendy, one of the coaches that Willow has available for people who can use some help. She was knowledgeable, patient, and very understanding of when I had to pause our conversation to tend to baby. After our session, we determined that the issues seemed to be with the sensor in my unit and not something I was doing wrong. She sent out a notice, and a new unit was sent almost immediately.

My second pump didn't have the same back-flow issue as my first, but I still notice a small amount of milk — about a teaspoon's worth — can get stuck in the canal.

Pumping On The Go

This is what the pump is designed for. My first time wearing my pump out of the house was unexpectedly exciting. Sure, I only went to fill up my gas tank, pick up a friend, and get sushi at a restaurant, but knowing I was multi-tasking was a good feeling.

It was even better knowing that I could pump for one kid without being stuck to the wall praying I wouldn’t hear the mischief of the first kid. Unfortunately, I’d only charged one of my pumps, so having one huge boob and one small boob left me looking a bit strange. But my friend said she didn’t notice the difference. So, I guess it wasn’t too bad.

I felt completely normal walking around using this pump in public — it was great. But again, it wasn’t perfect. It’s a lot smaller than a full-sized pump, so it fits in your bra but doesn’t have the same capacity. The trade-off is that you are untethered from the power outlet, but can't pump directly into a bottle, as with some traditional pumps. Using their “O” shaped baggies was another step I didn’t care for. And putting the pump together and making sure you hear the “click” to know it’s inserted correctly felt challenging to me.

But I understand when you're dealing with something small and efficient sometimes you have to miss out on other preferences. Another pro is being able to use the pump on one side and feed on the other (as it is small, it doesn't get in the way of baby, or vice versa) or use it after feeding to boost one’s supply.

In addition to the pump having less suck power (that’s a weird statement), there are currently only two flange sizes — 24 millimeter and 27 millimeter — available for use. It definitely had a small boob bias.

No pump is as efficient as a baby. And some women, myself included, have a lot more success with direct breastfeeding than using a pump. I wish it was a little simpler, although the videos are a lot less overwhelming. It’s still an awesome option for trips, walks, and pumping in a public workspace. It definitely allows you to pump smarter not harder. Not to mention the awesome Bluetooth function that lets you know exact what you’re pumping (and the speed) when used with the app.

The Willow pump isn't perfect. But no pump is. Regardless of the small drawbacks, it’s a huge step forward in parenting tech. And the potential of this pump can’t be understated for working parents. It’s another step toward normalizing breastfeeding and pumping.

Thanks to Willow, I can make milk without missing out.

The Willow wearable pump 2.0 is available now for $499 on willowpump.com.

More Like This
How To Breastfeed A Baby With A Cleft Lip Or Cleft Palate
How To Stop Breastfeeding A 2-Year-Old
Breastfeeding Twins: Everything You Need To Know
6 Ways To Fix A Shallow Latch So Your Baby Can Nurse Properly