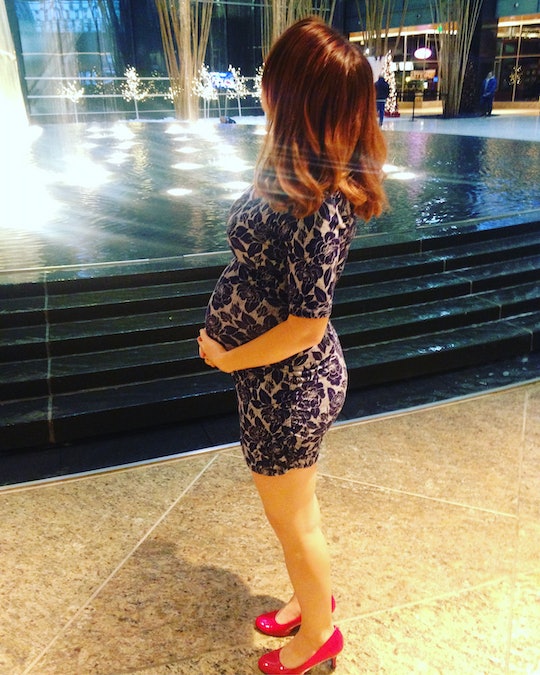 Why I Wanted To Go Paleo During My Pregnancy

“OK,” I sighed as I gulped the damp sea air. “I’m ready to have another kid now.” I was running a marathon along the foggy San Francisco Bay, and the thought surprised me as soon as my hot pink sneakers tread across the finish line. I was feeling strong, healthy, and capable. It could have been my endorphins finally kicking in after 13.1 miles of trudging over hills, or the roar of spectators emboldening me, but I felt great, in part because I had adopted the Paleo diet a few months before.

I decided right there that I wanted to have another baby — but this time, I would treat my body right. I would eat clean, abstain from bread, and ignore all sugary products; in short, I would get pregnant and stay on the Paleo diet.

My first pregnancy was marred by delivery complications that ended in an emergency c-section. Both my newborn son and I suffered infections, which required us undergoing a week of extra hospitalization. Our respective recoveries were slow and frustrating; the stress of a complicated birth had taken a toll on my body. Though I ate "all-natural" foods and had always been deemed in good shape by medical professionals, after I had my first baby I felt sick, exhausted, and far from healthy.

To take charge of my mental and physical health, I made the decision to “go Paleo" long before I made the decision to have another baby. The Paleo diet is sometimes referred to as “the Caveman diet,” because it prioritizes eating proteins, fruits, and vegetables over eating carbs and refined sugars. Freed from the bonds of processed, sugary foods, I found that I slept better, had fewer hormone swings, enjoyed exercise more, and rarely got sick. Most importantly, I felt happier. I was committed.

I visualized myself as the expectant lady in a maternity ad, smiling and caressing her swollen belly as her firstborn looked on proudly. I wish that was how it went.

A few months after my race by the bay, I discovered I was pregnant. Although I was thrilled, at first I was a bit wary about whether it was OK to continuing eating Paleo, due to all of the dramatic changes taking place in my body. When I did some research, I discovered that doctors typically discourage women from dramatically changing their diets during pregnancy. Dr. Octavia Cannon, an OB-GYN in Charlotte, North Carolina and Vice-President of the American College of Osteopathic Obstetricians and Gynecologists, assuaged these concerns. She tells Romper that pregnant women can indeed continue their Paleo lifestyles “with some modifications." She cautioned that there are some risks for women who eat Paleo while pregnant, including low blood sugar and worsened constipation “due to high protein in the diet," so to combat this, Dr. Cannon suggests that women on the Paleo diet consume “complex carbohydrates and fruits and vegetables with a higher glycemic index (rice, yams, yuca, bananas, etc). Vitamins and supplements can be helpful as well.”

After educating myself and discussing my lifestyle with my doctor, who encouraged me to continue to eat the way I felt was best, I had the green light to continue following the Paleo diet. Considering how great I felt on the diet when I wasn't pregnant, I visualized myself as the expectant lady in a maternity ad, smiling and caressing her swollen belly as her firstborn looked on proudly.

I wish that was how it went.

My early pregnancy was spent suppressing gags and kneeling in front of a toilet. I experienced a brand of pervasive nausea that lasted the whole day through, leaving me unable to even chop a vegetable without running to the bathroom in disgust. The dark, leafy greens, healthy meats, and juicy fruits that once comprised my diet became intense food aversions. The thought of eating kale reduced me to tears.

My body seemed to be punishing me for having a healthy lifestyle.

I had no idea what to eat without regressing to my days of eating bread and ice cream. I tried to coax myself into eating starchy, easily digestible snacks, but my stomach seemed to have lost interest in harboring food now that it cohabited with a baby in my body. It was maddening beyond belief. I had eaten, exercised, and slept exceptionally well prior to conception, but my body seemed to be punishing me for having a healthy lifestyle.

Considering how sick I felt, I was surprised to find that with every prenatal appointment, my doctor said I was gaining weight "normally" and my baby was growing normally as well. Although I wanted to stomp and whine and curse my reproductive system, it appeared to be doing its job adequately. Still, it seemed this baby wanted nothing to do with eating Paleo, and after months of frustration, I wasn’t sure how much longer I wanted anything to do with it, either.

The weeks dragged on. I had to buy bigger pants. But despite what I felt was my body’s increasingly close resemblance to a bowling ball, the biggest change I saw was not in my appearance, but in my attitude.

Eating a Paleo diet helped me exercise control over the sickness and exhaustion I'd experienced before my second pregnancy. I knew what I could eat, what would make me sick, what treats I could “cheat” with, and what side effects I'd experience. When I got pregnant, however, I lost that control. Instead of being proactive and taking charge of my health and my diet, I was stuck with a body that was responding to uncontrollable hormonal changes. Unable to focus on my Paleo diet, I began to focus on the positives: I had a supportive husband, a growing son; I'd been able to conceive; my family was healthy, and even if I felt like garbage most of the day, ultimately I was healthy too. When I shifted my perspective from frustration and anger to acceptance and self-compassion, my confidence increased and my pregnancy became much easier to enjoy.

Instead of forcing myself to eat protein and being angry at myself when I couldn't stand the smell, I learned to listen to what my body wanted. I ate what I felt like eating, even if it wasn't technically Paleo.

Once I adopted a more mindful attitude, I began to notice that my nausea ran in predictable cycles. Instead of forcing myself to eat protein and being angry at myself when I couldn't stand the smell, I learned to listen to what my body wanted. I ate what I felt like eating, even if it wasn't technically Paleo. This meant I would occasionally go a day without a meat or a vegetable (the horror!), but it turned out not to be such a big deal.

When I took the time to listen to my body, I found that eventually I was able to get the nutrients I needed and I could consume those foods without an issue. I didn't feel that I had to give up my Paleo lifestyle, or the benefits that came with it. I just had to learn how to trust myself.

Pregnancy is exhausting. The little energy I had as a pregnant woman was better spent on loving and appreciating my body, instead of obsessing about what I ate. Paleo empowered me to manage my health, but it also helped me accept that there are aspects of my health simply beyond my control. Ultimately, I learned I needed to be kinder to myself and my body during one of the most demanding chapters of my life. Regardless of what I ate, that was the thing that made me feel healthiest of all.

More Like This
How To Fly Safely During Pregnancy
Is Raspberry Leaf Tea Safe To Drink During Pregnancy?
Is It Safe To Pump While Pregnant? Experts Weigh In
14 Recipes For Sick Kids When Everyone's Tired Of Canned Soup & Crackers
What Parents Are Talking About — Delivered Straight To Your Inbox