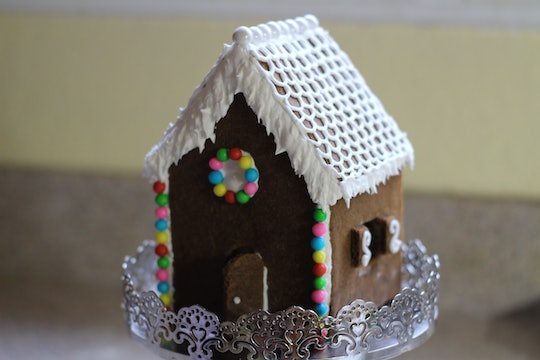 I Tried To Make Pinterest-Worthy Gingerbread House From Scratch

Ever since I was a little girl, I have dreamed of making a fantastic gingerbread house. I used to look through holiday cookbooks and home magazines and gawk at the beautiful, candy bedazzled gingerbread homes. I would draw plans and make lists of supplies, but my mother wasn’t much of a baker, so my grand gingerbread schemes went to waste year after year. The closest I ever got to realizing my gingerbread house dream was making graham cracker houses, spackled to milk cartons with canned frosting at school.

When I was finally old enough and skilled enough to endeavor a grand gingerbread house on my own, I had mostly forgotten about my childhood gingerbread obsession. The holidays as an adult were much busier, and though I often planned on making a gingerbread house, something else always took precedence. It always seemed like it was a project better saved for next year.

Now that I have kids of my own, my gingerbread house aspirations have returned. I feel like I should live out my childhood Christmas dreams through them. My oldest is finally at that age where he can help out with crafts, and I have passed on my affinity for Pinterest to both of my older children. So I decided to let them peruse Pinterest to find a fabulous gingerbread house for us to recreate and started in early this holiday season (before my good intentions fell by the wayside yet again).

Turns out that making the Pinterest perfect gingerbread house is harder than I thought ...

My favorite part of projects is usually planning. Even as a kid, I loved looking at all the different options and imagining how I would execute my imaginary baking plans. I think it’s because planning easily becomes procrastination, and I am a terrible procrastinator.

However, this time, the planning wasn’t all up to me. I decided to let the kids help pin images and decide what kind of house they wanted. We settled on a two-story gingerbread house, then once I realized I could not in my wildest dreams create a template for a two-story gingerbread house that wouldn’t cave in on itself (hey, I'm only human), we went with some smaller, candy-covered confections.

My son insisted for quite a while that we make a tardis gingerbread house. Not because we watch Doctor Who, but because it was BLUE and COOL. And every time he insisted on this, his sister would scream that she wanted the candy-cane houses we had been pinning. It was a joy. I was starting to wonder if we'd ever get to a point where we could agree on a house, but soon we started to come together with a unified theme. There was lots of piping decor and brightly colored candies, and the ideas seemed like we could mash them up into a pretty spectacular little house.

That is, of course, until the baking began.

Stage 2(A): Baking The Gingerbread Template

I kind of, sort of, sketched up a template for the gingerbread house while I was giving my daughter a bath one night. That is to say, my math skills were not very on point while I tried to stop her from dunking her head in the bath water while pretending to be a mermaid. My calculations led to gingerbread walls that melded together into a huge, messy heap, despite my best effort.

I realized that while I am an excellent baker, I am not such a great architect. It’s partly because I am lazy, and partly because math, which deals with angles, is not my strong suit.

Stage 2(B): Fixing The Gingerbread Template

What is my strong suit is Tim Gunning it in the kitchen (yes, Tim Gunn can be used as an action verb). When things start to fall apart, I just tell myself to “make it work” and figure out a plan. When my husband is around while I’m epic-ly failing in the kitchen, he’ll do the Tim Gunn voice for me. It really gets me to creatively problem solve. (And it's hilarious.)

So I took out my shoddy paper templates and cut around the warm gingerbread with a knife. Was it cheating? Sort of. Did it work? Yes. I was feeling very confident in my ability to build the Pinterest-worthy gingerbread house I'd dreamed of for so many years. And my kids were feeling satisfied with the fact that my mess-up meant there were leftover gingerbread cookie bits they could eat. Win-win.

I was feeling really confident about my abilities, until I started putting together all my gingerbread pieces and realized the fit was not quite as perfect as I had imagined. The walls weren’t quite even. The chimney didn’t quite fit together. But probably most troubling was that I had most definitely cut a door out of one of the roof pieces instead of one of the A-frame wall pieces.

So again I asked myself, What Would Tim Gunn Do? He would tell me to make it work. So I jammed the (thankfully not yet eaten) door piece back into the roof cookie and started to construct the house with a plethora of frosting. Like, so much frosting. More frosting than I ever dreamed I would need. More frosting than would ever be needed for a symmetrical gingerbread house.

I was starting to feel a little less confident in my abilities, and felt like my mom probably had the right idea by letting me look, but not actually endeavor, an elaborate gingerbread house as a child.

There wasn’t enough frosting or fixes in the world to make our chimney work, but surprisingly, the frosting seemed to hold up pretty well and the house didn’t cave in like I expected it to. This meant we were free to move on to the fun stage: decorating. Or at least, it would be the fun stage if we weren’t trying to recreate the Pinterest-perfect houses that had icicle piping around the edges and perfectly piped shingle rooftops. (I may be good, but not that good.)

The kids were whiny and gorging themselves on the candy I had put out on the counter for decorating while I did the painstaking detail work of piping the rooftop. They eventually lost interest and wandered off to play somewhere else, only occasionally coming back to snatch more candy from the counter. Once the roof was done, we put on some brightly colored candy and realized that many of the things that worked in the Pinterest gingerbread houses did not, in fact, work on our janky gingerbread house.

The candy canes wouldn’t stay up, so we ate them. The peppermints and chocolates were too big, so we ate those, too. Most of the decorating process was just eating candy. My kids were loving it, and couldn’t wait for the house to be finished.

While stage 5 was technically supposed to be finishing touches, it didn’t quite turn out that way. I started doing intricate piping on the sides of the house and had to wipe it off and start over again ... and again, and again, until finally I realized that I needed to settle for good enough.

My kids didn’t care that I didn’t get all the details they wanted. They got candy. Plus, they were just excited to eat the gingerbread house (little did they know I planned on putting it under a cake dome and saving it on the shelf until it was a stale brick of a Christmas decoration). Pinterest perfection isn’t really a goal to strive for with kids. I had to remind myself that this was supposed to be fun.

Was The Great Gingerbread Experiment Worth It?

I realized that all the stress I put myself under throughout the process was totally unnecessary. My kids would have had just as much fun making graham cracker houses. For them, it wasn’t about the final product so much as it was about enjoying the process — the planning, the baking, the candy eating — all of it. They were just thrilled to be doing a Christmas craft, end of story.

I definitely needed their reminder to keep my cook as we entered the holiday season. I have such a strong desire to make things picture perfect that I often forget to slow down and enjoy the process. Next time, I think I’ll let my kids take the reigns a bit more and show me how it’s really done — with a whole lot of joy and imperfections.