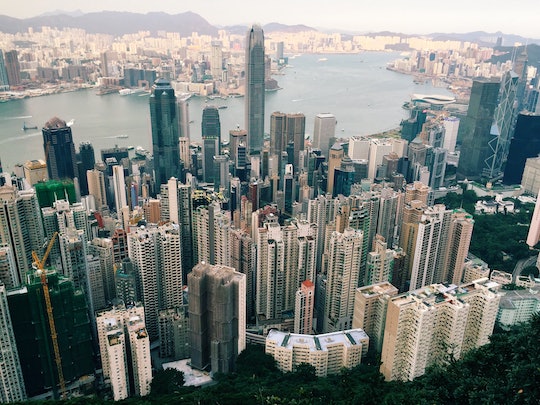 I Tried To Recreate Thanksgiving In Hong Kong, & Here's What Happened

Ten months ago, we picked up and moved our family of four from Los Angeles to Hong Kong. Having never lived outside of the good ol' U.S. of A, it was quite a big deal for my two children and me to live as expats for the first time. My British husband had grown up in the Fragrant Harbour (that's the Chinese translation of Hong Kong) so moving here for him was basically like moving back to his hometown. So far, it's been an incredible experience for all of us to be living in this bustling, exciting, and culturally rich city. It's old and new, Chinese with colonial remnants, and it's culturally diverse and very international. You can find almost anything in this city. But can you find everything you need to give your family the Thanksgiving experience they're used to having in the States?

Honestly, IDK. Because that this was our first Thanksgiving we've celebrated abroad, I wasn't exactly sure how things would work out. Where could we buy the ingredients? Would my kids even care? Would I? (Um, spoiler: Of course I would.) Thanksgiving in a huge event in America, but in our neck of the woods peopled aren't so jazzed about carving up a big turkey and chowing down on mashed potatoes. So what's a girl to do?

We're living in the heart of Asia, but because of the colonial history as well as the sizable expat community, one can still find their fill of "Western" foods. The bursting restaurant scene is full of cuisines of every type and the grocery stores cater to a mix of Chinese and Western preferences. Though we tend to have more British than American friends (thanks to my husband), the American influence is definitely still noticeable and significant enough to warrant having a few "American grocery stores" around.

Knowing this, I went about my life in the weeks leading up to Turkey Day feeling pretty confident I'd be able to successfully, or at least, sufficiently figure out how to create a Thanksgiving here in Hong Kong that my family would enjoy like we did back home in 'Merica. Because there's really no Thanksgiving build-up outside of the U.S, no constant reminders to order your turkey, no randomly placed cornucopias spilling forth Brach's butterscotch candy at the doctor's office, and no gourds to be found basically anywhere, well, let's just say I was already starting off at a little disadvantage.

Turkey or not, I was going to try my best to recreate Thanksgiving in Hong Kong. Was it possible? Was it delicious? Here's what happened.

Since I work full-time and often don’t make it home until late in the evening, I don’t have much time to do grocery or any other type of shopping (aside from on weekends). I was stressing about getting to the store to get everything I needed in plenty of time before the big day, but not so early that the produce would be all wilty and sad. Most of the produce I'd need is imported, which means a much shorter shelf life.

The Search For The Bird

Unlike in the States around this time of year, where there are turkeys piled up in the refrigerated and frozen sections of the grocery store, the only turkeys you'll find here are the odd pack of deli meat, and that’s only sometimes. I’ve found that most grocery stores here don’t consistently carry the same products so from one week to the next, you'll often need to switch brands and flavors or just make do without the item altogether.

TBH, turkey is not a commonly eaten type of poultry for other non-American expats. My British husband is always so bemused when we order turkey sandwiches or eat turkey burgers when we’re back home in the States. I was really hoping that the stores in my neck of the city would stock even a few turkeys to cater to the Yanks, but no. So back to the drawing board! I'd have to do my research and keep looking.

What About The Sides?

Thankfully I was able to find most of the things I needed to pull the side dishes off. I stocked up on a few bags of good old russet potatoes to mash up and I even found green beans and cream of mushroom soup for the casserole. I even found yams. YAMS! I was feeling good, even kind of cocky. “Don’t mess with this Thanksgiving Master,” I said, as I punched one hand up in the air holding a yam sword channeling old He-Man cartoons. As hard as I tried though, I could not find any form of stuffing. I’d have to make that from scratch. And I would. And the yam fist shot up again.

So What Can You Use To Substitute A Turkey?

So between totally swamped at work and not having enough American friends here to point me to the turkey troves, I didn’t get to the butcher shop that I had found close to our home to buy the turkey they said they had until the day before our Thanksgiving feast. When I got to the shop, I exhaled a sigh of, “THANK THE GOOD LAWD!” when I saw that they still had one turkey left. Then I became increasingly discouraged when I realized that that one turkey left was a big 20 pounder, and then found out that it was completely frozen.

That all sucked, but I could probably still make it work if I ran the bird under warm water to quick thaw it. And I’d just force my family to eat turkey for the next few weeks. And then I saw the price: $120USD. Yep. A big $120 fat ones! My Thanksgiving enthusiasm drained from my being and I could feel red, white, and blue tears welling up in my eyes. Is this a turkey or a Fabergé egg? “I’ll be right back,” I said to the butcher behind the counter and all but ran out of the store.

I quickly ran down to the street market, my 3year old flailing about on my left hip. I thought: Maybe it doesn’t need to be a turkey, maybe it just needs to be another type of bird. Surely, any other type of poultry will work, right? It'll all taste the same covered in gravy. Maybe, just maybe I can pull this off with a different main course. I stopped in front of the local Chinese barbecue joint and examined the chicken and geese hanging in the window. My daughter screamed, “That’s not very nice!” and started to cry. I also started to cry, and screamed a series of very bad words using my inside-my-head voice.

We walked further down the street to look at some other options. How about a nice cut of meat? My daughter cried harder. What the hell was I thinking taking her on this sad turkey replacement journey with me? “Are these dead cows?” Stella shouted, obviously demanding an answer. I felt myself slowly becoming a vegetarian. I distracted her with a Halloween candy I found in the side pocket of my purse, and we moved on.

“Fish. That’s it. We’re eating fish!” I said as we stopped in front of a fish stall. And as soon as that sentence had exited my mouth, I came to my senses. Just the thought of fish and yams mixed together made me dry heave. I turned around and started to make the journey back to Fabergé Turkey town.

But that Turkey Town was deserted. NO MORE TURKEY.

What did I expect? Somewhere not so deep inside, I knew that there was a good chance that someone would go in and snatch up that turkey as soon as I left. So why didn’t I just buy it, and take the you-do-what-you-gotta-do-to-do-Thanksgiving hit? Probably because the challenge of making Thanksgiving dinner happen had worn me down, and I'd lost the turkey dinner prep inspiration somewhere between seeing the turkey’s price tag and blinking. I wearily carried my daughter back to our apartment and made the announcement:

There will be no turkey dinner this year! We are going out for dinner.”

And there we were, our first Thanksgiving in Hong Kong, having a delicious dim sum meal. It seemed weirdly fitting, actually. And we had it at a very ordinary restaurant down the street from where we live. The food was good, the stress level was low, and we were all happy.

Obviously I Failed, But Here's What I Learned

Knowing Thanksgiving was coming without having much hype surrounding it was weird. There were no Thanksgiving displays at the stores, no toilet paper turkey rolls or pilgrim pictures coming home from school with the kids, no sales circulars or commercials about Black Friday. We had to create our own Thanksgiving fanfare, which we didn’t end up doing well, obvi. Ugh. But guess what? Having to work so hard to recreate our celebration of an American holiday outside of America and then having a completely different experience made us THANKFUL! Really. Thankful for traditions, for this new adventure living outside of our home country, and our comfort zone. It made us all stop and reflect on why we love the holiday so much. And as we sat around the small, no frills table at our local dim sum spot, we took turns listing all the things for which we were thankful. “My family!” “My job!” “My skateboard!” “My crayons” “This dim sum!” And I got REAL thankful when I realized that there would be no clean up after this meal.

Sure, Thanksgiving this year wasn’t what we were used to, but in a way, it was better because it helped us better appreciate the real meaning of the holiday: practicing gratitude. As I sat there watching my 3 year old slurp up her noodles and my son take down a scallion pancake while upbeat Canto-pop music played overhead and a guy walked by wearing a shirt that said, “Wrangler: the Seattle of Washington,” I could do nothing but giggle and be happy.

I guess you can be thankful anywhere.