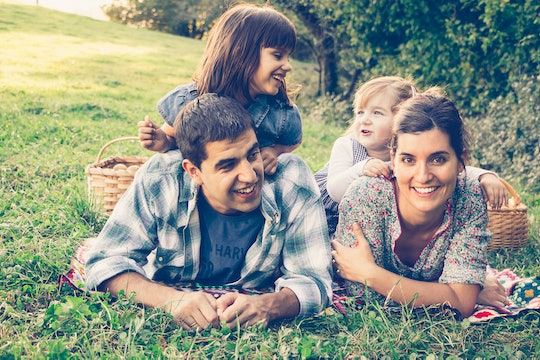 I Took Anti-Depressants To Be The Mom My Baby Needed. That’s Also Why I Quit Them.

When my children were young — ages, 4, 2, and newborn — I was not at my best. This was a time when a glass of actual spilled milk would make me hysterical. I was drowning in the unexpectedly hard world of parenting and crying. Daily. It was also at this time that one of my best friends from high school was diagnosed with breast cancer, and my mother-in-law with lymphoma. It was all I could do to keep it together, between being a stay-at-home mom to three children 4 and under, with a husband who worked long hours, and constantly worrying about my dear friend and my mother-in-law. Back then, I had no idea these little kids I was pouring my heart into would save me when I tried to self-wean from antidepressants.

At the time, I knew I needed help. So I took care of my brain. If you had blood pressure problems, you would get medication for that; if you had diabetes, you’d get medication to control it; if you had a heart problem, you would treat that as well. My brain, a very important and necessary part of my body, was sick. I admitted to myself that I had a serious issue and I went to my doctor for help.

Antidepressants allowed me to parent my children in a way so that I could be present and emotionally capable of meeting their needs.

I went for help because depression and anxiety are disorders, mental health issues, and I knew I had to, and I could, receive treatment. I had no qualms whatsoever about going on a medication to make me feel better. It allowed me to parent my children in a way so that I could be present and emotionally capable of meeting their needs.

At one point, after I had been on medication for quite a few years, when my children were in elementary school, I thought I felt strong enough to try to wean from the meds. I did so then, with the help of my doctor, but a month or two later, I found myself back at her office, crying to her, saying, “I can’t do this. I can’t.”

She was a brilliant doctor, one who believes that the brain is a part of the body that gets sick too, and that medication is okay — that it helps the brain to not be “sick.” When I came back to her office, telling her I couldn’t do it, she was kind and understanding. She said she didn’t think I was ready when I told her I wanted to go off my meds, but she had to let me try my wings, leave the nest, see if I could, in fact, fly.

My children, for the most part, are grown. My oldest son is 20 and a sophomore in college. My two younger children are finally well, though both have had their own issues with mental illness, which are proven to be hereditary. Getting a handle on your own needs can be hard when you have small children, and I needed to call on the things I had learned then to educate my kids about their own wellbeing. As my children grew up and got sick, and then got better, our family was very open about talking about how medication can help, and I had no qualms about getting them medication when they needed help too. There were some rough years and honestly, medication was a godsend during that time.

I went about stopping my medication the wrong — probably the very worst — way.

Very recently though, I felt like things had leveled out with my family; I was feeling better. I wanted to know what normal felt like again; I wanted to have emotion and excitement. I wanted to feel healthy. I think being on a medication for that long numbs a person, makes you feel like a character from The Walking Dead. I didn’t want to be a “walker” any longer. I wanted to be alive in every sense of the word. I thought, “Maybe it’s time.”

I do believe it was time, but I went about stopping my medication the wrong — probably the very worst — way. I thought that since I was on practically the lowest dose of Venlafaxine, also known as Effexor, that I could self-wean, without the assistance of my doctor..

For one week, I cut my dose in half, and then, I had no more pills. Voila! I was done. Self-weaned.

Almost immediately after I stopped taking my meds, I started feeling off. There was no other way to explain the feelings I had. I had a very hard time concentrating on the simplest of tasks. For two days I felt like I couldn’t focus; I had been feeling dizzy and nauseous; my eyes and brain were not doing what they were supposed to be doing, and it felt like there was a literal glitch in my heart. It would skip a beat, and then after a second or two, decide to keep beating in my chest, keeping me alive.

I remember not caring if I were to die, I just wanted the feelings to go away.

As a migraine sufferer, I worried that I was simply getting another two-day bender. But it was so much worse. So bad, that on the second day of feeling sick, I called my daughter into my room and said, “Take me to the ER, I think I’m having a stroke.”

My daughter drove me to the hospital, where we both fell into tears as I told the intake nurse that I feared I was having a stroke and that maybe I was also dying. My hands were clenched, I was unable to uncramp them, and I felt my mouth was not doing what it was supposed to be doing. I couldn’t breathe properly and I was hyperventilating. I remember not caring if I were to die, I just wanted the feelings to go away.

I was admitted to the ER, where they gave me a chest X-ray to rule out blood clots, an EKG, a pregnancy test, and an IV full of meds. While I mentioned I weaned myself from Effexor almost cold-turkey, the doctor gave no indication that might have been the reason I was there. I was told I was dehydrated, and low on electrolytes and potassium.

It’s as if a floodgate of emotions has opened in my head. Things that would usually pass by me without a thought bring me to tears. A commercial about #VegasStrong, an episode of This is Us.

I have no idea what made me think that I could wean myself from a medication that was taking care of my brain for 16 years, that I might be OK doing it on my own. I knew better. I know better!

Having survived the worst of withdrawal — an experience I wouldn't wish on anyone — I was self-weaned. On the other side of that hellscape, I am finally finding a new normal without antidepressants. It’s very strange really, though, because it’s as if a floodgate of emotions has opened in my head. Things that would usually pass by me without a thought bring me to tears. A commercial about #VegasStrong, an episode of This is Us, a quick FaceTime call with my college son and that telltale lump of emotion in my throat that had been quieted for so long emerges, raw and relentless.

These emotions are different, it’s new. It’s a bit disturbing, like a wave of sadness — a wave of feeling — but then it passes. And I think to myself that it’s OK to have these moments, because that tells me that I am feeling. I am feeling things. The good, and the bad, and the sad, and the joys. While before, I still felt emotions, of course, now they are amplified. And I think I’m ready for this.

I am ready for my new normal.