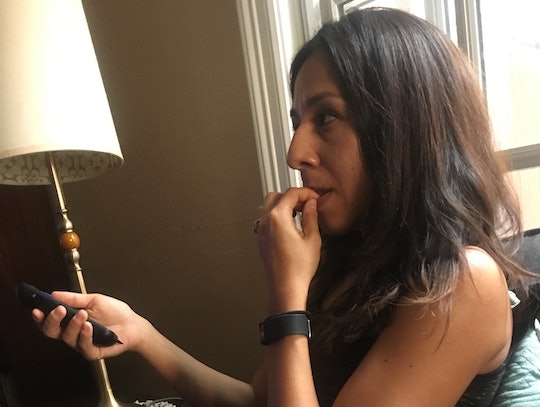 I Tried Toddler Tantrum Techniques On My Own Anxiety, & I Have A New Appreciation For Tantrums

If you take a look at my hands in the days leading up to a big trip, an important meeting, a play date with a new mom, you’ll see painfully short nails and ripped cuticles. Not an awesome sight, I know. I’ve been a chronic nail biter due to social anxiety for the majority of my life, especially during those teen years when I completely lacked self-confidence and worried about everything. Although my nail biting is out of control when I’m really anxious, I can tone it down or hide it when I absolutely have to. But because I don’t want my kids to mimic my behavior, I decided to take a leaf out of the parenting books and try toddler tantrum techniques on my own anxiety. Here’s what happened.

Similar to how it’s 10 times harder to calm a toddler mid-tantrum, so is stopping once you've entered nail-bite mode. Once I get fixated on biting a cuticle on a specific finger, that’s it. Stopping is really hard. Using the guidance from several articles on taming tantrums, I followed the advice that steps should be taken to stop tantrums before they begin. Using this approach, I took a look at the calendar to see if I my work week would be stressful.

Since I tend to bite my nails at work, I made sure to focus on not biting my nails by painting them. Usually when I paint my nails I give myself a few days of non-biting, so I went for a really bright color. It worked for the first day but I did start pulling at my cuticles by the second day at work.

Tantrums start when kids can’t get what they want. Nail biting begins when I feel something is out of my control, or when I’m bored. Or when I’m nervous. With a big project due at work, it was no surprise that I demolished my nails by the end of the week.

Much in the way that a well-timed performance of the Mickey song is a good distraction from a tantrum about which color cup a child gets to drink from at bedtime, doing something with your hands is supposed to be a way to distract someone from biting their nails, and turn the focus elsewhere.

To create a diversion for myself, the way a parent might do in a supermarket ("look, child, a wall of ketchup!"), I took different props into work meetings so I would have something to mess with instead of pulling at my cuticles. I get nervous during meetings so I made sure to take in my bottle of water, an EOS lip balm and some hand cream. A lot of stuff for two back-to-back meetings but I was desperate.

The EOS lip balm was a perfect distraction since I could roll it around in my hand, kind of like a stress ball. When I got tired of that I would sip some water or just keep it between both hands when they were on top of the table. The cream was a nice diversion but there’s only so many times that you can apply and reapply cookie-scented cream without everyone noticing.

At home, my daughters caught me biting my nails and called me on it like they usually do. “Mom stop, biting your nail,” my youngest told me. When I asked them if they wanted to paint my nails to help distract me from biting them, they were so excited. The only rule was they got to pick the colors.

No, I'm not above sticker charts as a grown adult with two children. A few years ago I believed I was a reformed nail biter and it was all thanks to professional manicures. Whenever I felt like I needed to bite my nails, or I would chip away at my nail polish, I’d make sure to schedule my next appointment for later that week. I did really really well for about two months, but eventually something would cause me to start biting my nails again. What was it? I have no clue.

My incentive for not biting my nails during the week was a professional manicure and pedicure, since I do not get them often.

Unfortunately I was unable to not obliterate my nails this week so I did not schedule a reward mani-pedi. However, I made a goal of going in for a nail appointment the first week of September with my girls if I let my nails grow long enough.

A Change Of Scenery

If you've ever carried a screaming child out of a restaurant mid-way through a plate of chicken tenders, you know the value of a change of scenery in helping treat a tantrum. When I caught myself biting my nails at the dinner table, I decided to change my surroundings. Instead of sitting down at the table reading news stories about the status of our world (status: not good), I left the phone in the kitchen and invited my girls to a Fancy Nancy tea party.

For about 40 minutes we sat on the carpet sipping on “tea” from a fancy tea set that we never play with since it's made of glass. During that time we had Milano cookies and discussed fancy ways to drink tea (pinkies up, according to my 5-year-old) and which cookies we would eat next time. I did not bite my nails at all.

The Result: Maybe I'll Grow Out Of It Yet

It seems I will never break this more than 30-year habit. After employing several toddler tantrum techniques to tame my own nervous energy, I’ve realized that I can force myself to stop when I know people at work or my kids are watching me. Distractions and sometimes at-home manicures also impede this nervous habit... but only for a short amount of time.

Anxiety is something that I will deal with my entire life, and is something I can't just will away — much like the little hurricanes of emotion that blow through our children once in a while. I appreciate that a little better after a week observing my own attempts to tamp down an instinctive response to difficulties — my own versions of that's not my favorite dress / I want the towel with the elephant on it!

The next time my kids are having a hard time keeping a lid on it all, I think I'll tell them I understand they're feeling a little blustery, so they can let it out, and then we can have some tea.

More Like This
These 9 Potty Training Techniques Will Work On Even The Most Stubborn Toddler
What Is RSV?
The Best Halloween Family Pajamas To Match Your Boos
Tips For Apple Picking With Kids