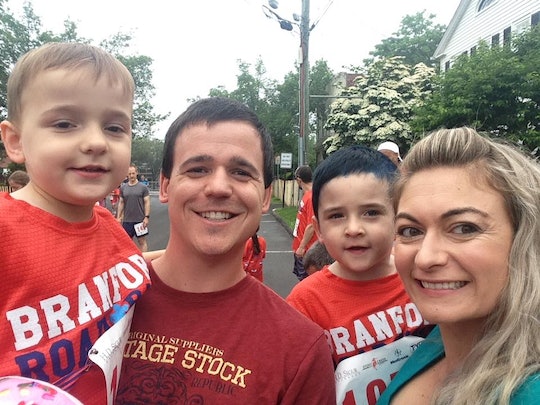 A few months ago, my family got an adorable Cocker Spaniel puppy named Caleb. I had read up on training a pup, and I was so excited to spend the summer teaching my dog all sorts of tricks. But my dreams of performing a doggie and me tap duet were shattered when we quickly discovered our 4-year-old twins are allergic to dogs. Caleb went to a new home, and I was left with all this dog training knowledge and nothing to do with it, until my editor challenged me to train my partner like a dog.

Consensual bedroom kinks aside, I don't condone the idea that one person in a relationship should dominate over the other, the way dogs naturally do in a wild pack. The bond between a human and their pet is very different from the bond between partners. But truthfully, there are a few small things about my partner's behavior that I'd change if given the chance. I know that if I were to sit down and talk to him directly and honestly, he would do what he could to make me happy. But between our jobs and taking care of our twin preschoolers, we don't get much alone time together. I hate the idea of earmarking some of it for a conversation that's essentially me complaining about trivial little things if there's an easier way for me to change his behavior.

The saying that "men are dogs" is offensive to both men and canines alike. Still, I wondered if Cesar Milan, the Dog Whisperer's tricks for improving a relationship with man's best friend would work with an actual man, too. So I decided to try it.

For one week, I attempted to train my husband to perform some simple tricks: stay, come, fetch, speak and roll over. Is treating your partner like an animal the key to marital bliss? Or is it true that you can't teach an old dog new tricks?

My partner is missing the millennial gene that allows the rest of us to binge-watch shows for hours on end without getting bored. He can't get through a single episode of something without checking his email or grabbing his Nintendo Switch. "I'm listening," he tells me, his eyes on Zelda. He's not. Normally I don't care when our interests don't align, but he misses key plot points when he does this and then I have to re-enact the episodes to catch him up to speed, and TBH my British accent sucks.

Cesar says part of the key to finding balance with your pet is being aware of your energy and honoring your dog's instincts. I realized the shows I want to watch (Orange Is The New Black, Chewing Gum, Glow) aren't shows that he's into. He'd rather re-screen Game of Thrones or travel specials.

I'm just as guilty of not fully committing to relaxing as he is. I like to knit or color while we watch, which means I'm nearly as distracted as he is. When we do that, we're spending time alongside each other instead of together. I decided to focus on him and the show and suggested we watch Silicon Valley, a show we both like. Then I reached for his hand, which is rare for us. "Stay," I said. He smiled, and obeyed.

I love to cook, but few things piss me off more than when I put the finishing touches on dinner (squeezing ketchup and putting lids on sippy cups), proudly declare, "Time to eat!" and watch as no one moves. I just spent an hour stirring and chopping and burning myself. I don't need tons of praise or a standing ovation, but the least my partner can do is herd the kids to go wash their hands so we can eat while the food is still hot.

I announced that dinner was ready, and of course no one even looked at me. "Tsch!" I hissed. "Dinner. Tschhhhh!"

"Tsch!" is Cesar's go-to command when trying to correct a dog's behavior. Part of me felt like "Tsch-ing" my spouse was too far, that I'd be treating him like an actual dog. Then I found out Cesar picked up the habit from his mother, who used to "Tsch!" him all the time in order to get him to listen to her. Suddenly I was fine with it, even if I was a little worried that he'd catch on.

I made a Zander weeknight classic — ground turkey with marinara sauce over veggie blend pasta that I feed my kids so I feel less guilty about their refusal to eat spinach.

I announced that dinner was ready, and of course no one even looked at me. "Tsch!" I hissed. "Dinner. Tschhhhh!" My kids cracked up at the silly new sound and my husband looked at me like I was demented, but at least I got their attention enough to get them moving toward the table. Plus, it beat having to yell. I'm so trying this the next time the kids are fighting over a book.

I know, I know, treating my partner like a servant is wretched of me. But in my defense... fine, I have no defense, I'm just too lazy to walk downstairs when I want a snack.

My partner is just as lazy come nightfall. He's a fan of telling me he "doesn't know how" to pop popcorn without burning it or telling me I'm "better" at smearing peanut butter on apples as a way to get me to make the trek downstairs.

"Fetch," I cooed, and gave him my best attempt at a sexy wink.

Cesar says the trick to getting a dog to fetch is to pick something they like and use extra motivation on top of that, like playing tug of war with them after they get what you ask them to.

Instead of asking him to go grab me a glass of water or grapes, which I usually like to nom on at night, I stashed two pints of Ben & Jerry's in the freezer and told him there was a surprise downstairs. When he still rolled his eyes at me, I said guys holding ice cream were sexy. "Fetch," I cooed, and gave him my best attempt at a sexy wink that I hoped was code for "I'll get naked if you do this for me." He took the hint, even if I did look like I was having an eye spasm. I got my ice cream, and later, we both got off. Thanks, Cesar!

My partner and I don't fight over much, but when we do disagree, one of the things that drives me mad is how I feel like I'm talking at him rather than engaging in a discussion. I'll talk about my feelings for what seems like hours and then pause for his thoughts, all the while convinced I know what he's thinking.

Cesar says, "Humans tell stories, dogs tell the truth." While I know my partner is capable of deception if he wants to be, the point is that I'm guilty of sometimes creating a version of events in my head that doesn't match reality. If my partner is quiet, I assume it means he's bored of me, when maybe he really is just tired.

On day three of my training experiment, I asked him if we should change our vacation plans for next month pretty drastically. I suggested we change our flight time and even where we plan to stay the first few days. He agreed immediately and made the changes. Normally, I'd take this to mean he wasn't happy with our original plan and didn't say anything, but was secretly resentful. I'd start a fight, demanded he tell me "how he really feels."

Instead I took a deep breath and got out of my own head. I asked him why he was so quick to agree with me. "I was actually thinking the same thing and was going to check flights to talk to you about tonight," he said. Oh, OK then. I had no idea it could be that simple.

I know that many people like to spoon at night, but when I want to sleep, kindly GTF off me. My partner, however, is a cuddler. Usually I tolerate being held until he falls asleep and then I worm my way out from under his arm. This would be fine, except that it leaves him on my half of the bed and me clinging to the edge of the mattress for any aliens or ghosts to grab. Plus, his normal body temperature is roughly equivalent to that of Mt. Vesuvius, so 5 minutes of his arm around me and my pajamas are literally soaked through with sweat.

I whisper, "Can you roll over please?" into the dark a few times, but my partner only snores in response. I try a gentle "Tsch!" since it worked so well at dinner the other day, but he's still asleep.

The American Kennel Association says getting a dog to roll over starts with getting them into the down position. Since my guy's already laying down, I figure I'm ahead of the game. But it's the actual rolling over part that's hard. The AKA says to say, "Roll over!" while moving a treat from your dog's nose to his shoulder, so he follows it with his body and flips over.

Instead, I whisper, "Can you roll over please?" into the dark a few times, but my partner only snores in response. I try a gentle "Tsch!" since it worked so well at dinner the other day, but he's still asleep. Finally, I reach over and snag my dirty shirt from the laundry chair. I waft it under his nose and toss it to the other side of the room, hoping he'll follow the scent. He doesn't budge. Maybe he's training me how to cuddle?

Who's a good boy?

I thought trying to train my partner like a dog would be a fun summer prank, something I could tease him about once the week was up. Instead it was actually really eye-opening.

I still don't subscribe to the dog/master power dynamic, but what stood out to me in trying to act like a dog owner was how simple things are when you're trying to train a dog. I'm a complicated person, but my relationship doesn't have to be. Here's to clearer communication and staying out of the doghouse.