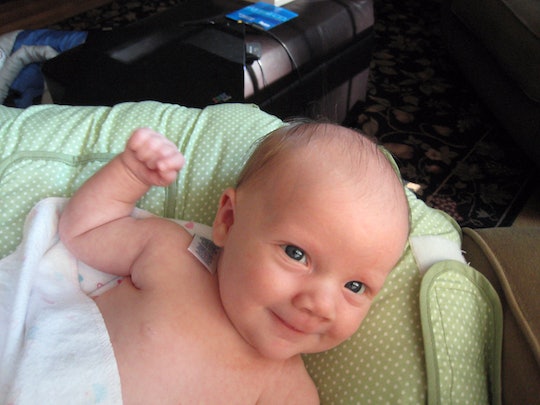 I Weaned My Daughter With Vinegar

When I had my first daughter, for some reason I'd gotten it in my mind that exactly 12 months was the perfect amount of time to breastfeed a child: no more, no less. I'd watched my cousin whip out her breast to feed her 18-month-old son, and I'd smugly judged her for it. If the kid can ask for seconds, he’s too old for the tit, I thought.

Then my daughter was born, and our year of breastfeeding came and went. I realized that it was just easier to continue than it was to stop. I assumed she would quit on her own, and that I wouldn't have to go through the process of weaning her, as had been the case with my friends and their babies. But as is often the case in the life of a mother, things didn't go according to plan.

As my daughter approached her second birthday, I decided it was time to put the kibosh on our breastfeeding relationship. I had to turn to drastic measures to wean my toddler — in this case, by using a spray bottle of vinegar on my nipples.

At first, I was torn. I loved that breastfeeding was easy and convenient. I didn’t need to wash extra sippy cups, I still hadn’t gotten my period back, and I’d lost a ton of weight because I had to eat dairy-free due to my daughter's dairy intolerance. But frankly, I was feeling a lot of pressure to quit. Most of my friends had weaned their babies in infancy (according to the National Association for Child Development, most American babies are weaned at approximately 3 months), and many of them said it hadn't been a problem; in fact, it had been the baby's idea to wean.

I tried to get my husband to tell me what to do, but ever the women's rights advocate, he told me to make the decision for myself. Unfortunately I just didn't know.

She effortlessly pulled my boob out of my tank top and latched on right there in aisle seven, like it was nothing. Under the fluorescent supermarket lights, my cold, bare boob told me it was time to break up with breastfeeding.

Then one day, as I was strolling through the grocery store, I stopped at a shelf and tried to decide which Oreos looked best. Suddenly, my daughter, who had been asking for a snack the whole time, got a hankering for a cookie’s best friend: milk. She effortlessly pulled my boob out of my tank top and latched on right there in aisle seven, like it was nothing. Under the fluorescent supermarket lights, my cold, bare boob told me it was time to break up with breastfeeding.

At first, I tried a bunch of more laid-back weaning methods. I tried the ol’ “don’t offer, don’t refuse” technique, which basically meant I was nursing her when she asked for it, but I also wasn't shoving my boob in her face all day. If you're willing to wait indefinitely to let your child gradually wean herself, it seems like a pretty good plan, but at that point, I wanted my body back to myself ASAP.

She’d never had a lovie, a blankie, or a stuffed animal to make her feel safe. All she’d ever used for comfort was the booby. And now I was telling her I had to take it away from her.

My daughter was still asking for the boob multiple times a day, so I opted for the other extreme and tried to wean her cold turkey. The first time she squeezed her fists doing the sign for milk, I offered her a sippy cup of almond milk. She looked at me like I was high and smacked the cup away. “Nuk, nuk,” she said pointing to my sweater puppets.

“No nuk,” I told her, again offering the cup. The hurt in her eyes killed my heart. She’d never had a lovie, a blankie, or a stuffed animal to make her feel safe. All she’d ever used for comfort was the booby. And now I was telling her I had to take it away from her. It felt cruel.

I realize cold turkey weaning works well for some moms, and I’m not here to judge them one bit. But I knew it wasn’t going to work for us. Everything in my mama heart screamed that it was wrong, and I couldn’t take it.

I realized I needed a new game plan. The internet told me to make sure to give my daughter lots of physical affection and try to replace my milk with hugs, but that didn't work at all. Shockingly, snuggling her up against my breasts without offering her access to them didn't make her all that happy.

I decided I would pickle my own boobs.

I started to think about how we’d approached potty training. She’d shown interest in using the potty at 15 months, so I put a potty out there and hit it hard. She was totally potty-trained at night and naps by 18 months, but during the day she fought me tooth and nail. I finally gave up, put her back in diapers and she potty-trained herself in about a month.

I needed weaning to be her idea. So I came up with a plan to make my milk unappealing without making her feel rejected. I decided I would pickle my own boobs.

I wanted to try making my milk taste yucky, and vinegar was the first thing that came to mind. I planned to fill a spray bottle with a vinegar and water mixture, but first I checked with my doctor, who was also a breastfeeding expert.

Every time she asked for milk, I would say, “Are you sure? Mommy’s milk is kind of old.”

She said that generally speaking, apple cider vinegar is totally harmless and actually has some proven health benefits, such as anti-fungal properties. In fact, she frequently prescribes a little apple cider vinegar to treat thrush and acid reflux. I asked if she thought this would hurt my child in any way, and she said no, because it was such a small amount. She was more concerned that weaning my daughter cold turkey would lead to me developing mastitis, and that my daughter might feel emotionally abandoned as a result of being weaned. Her advice was to give my girl some sort of heads-up that we might be nearing the end.

I set the stage a few weeks before my dastardly plan by telling my daughter that she was getting big, and I was so proud of her for going to the potty and brushing her teeth and picking up her toys. I showered her with praise for all the amazing things she was doing as a big girl who was about to turn 2. Every time she asked for milk, I would say, “Are you sure? Mommy’s milk is kind of old.” And every time, she would look at me like, “OK, lady, I get it. Now get that titty out.”

I chose a day to start the process of weaning her with vinegar. A week before D-Day (Ditch the Boobie Day), I took her to Target to pick out her favorite sippy cup. She chose a two-pack of Buzz Lightyear cups, and I started keeping them stocked with vanilla almond milk to sweeten the transition.

I kept up with the storyline that my milk was getting old, but she continued to nurse without slowing down. Then it came time to execute The Plan. At nap time on D-Day, I filled a small spray bottle with a teaspoon of apple cider vinegar. The rest of it was just water.

She latched on, but immediately pulled back in disgust. “Yucky mama,” she said.

As we lay in her bed ready to snuggle up for a nap, she asked for her "nuk." I smiled and told her, “OK, sweetheart, let me get your nuk.” I rolled over, and with my back to her I whipped out my boob and gave my nipple a quick spritz with the vinegar water. I rolled back over and offered it to her.

She latched on, but immediately pulled back in disgust. “Yucky mama,” she said.

I pretended to be perplexed and asked what was wrong. She just smacked her lips and looked at my boob with a puzzled expression.

“Oh, is it yucky? Maybe it’s getting old?” I said innocently. I asked if she wanted Buzz milk instead and offered her a sippy cup. She hesitated, but refused the cup and latched back on. After a few seconds, the vinegar taste was gone and she nursed herself to sleep.

I didn’t expect it to work the first time, so I stuck with the plan that night at bedtime. Once again, she snuggled up to me and squeezed her chubby little fists asking for “nuk,” and once again I gave it to her after spritzing my nip. She tasted it, scrunched up her face, and said, “Yucky.”

Again, I said, “Oh, maybe Mama’s milk is getting old? Do you want Buzz milk?” And once again, she shoved Buzz away and latched on. At this point, I was starting to lose hope for this plan, so I resigned myself to the idea of my daughter taking milk breaks in college.

But the next day at nap time, we had a breakthrough. She asked for milk. I secretly spritzed. She cautiously tasted the boob before trying to latch, then looked at me and said “You nuk old, Mommy?”

I looked concerned and a little sad as I told her, “Yeah, baby, Mommy’s nuk might be getting old. Do you want Buzz milk and a snuggle?”

She looked one last time at my breast and grabbed the cup. I let her snuggle my bare breast as she sucked down the almond milk, wondering if this really was the end or just a fluke.

I loved having my body back, but there was this strange, sad pit in my stomach that I couldn't understand.

But that was it. That night before bed, she asked for milk out of habit, but she quickly rescinded her request and asked “You nuk old Mommy?” I told her I thought so, but asked if she wanted a snuggle and some Buzz milk. She took me up on it, and we had about three more sessions of her nuzzling my bare breast with a cup of almond milk before it became normal for her to just ask for Buzz milk. The cord had been cut, and she no longer needed my body for nourishment.

The days following her final feeding were a roller coaster. I loved having my body back, but there was this strange, sad pit in my stomach that I couldn't understand. I later learned that there's a drop in oxytocin that usually accompanies the weaning process, with some women suffering from full-blown depression brought on by the shift. I vacillated between celebrating my weaning victory, and completely melting into a puddle of tears for a few weeks after that last nursing session.

There was a silver lining to that cloud, however: as soon as I weaned my oldest daughter, I got pregnant with her sister. (I ended up not repeating the vinegar-weaning process and nursing her until she was about 3, fresh out of f**ks to give.)

Still, I’m happy to say that the vinegar allowed me to gently wean my first child. If I hadn’t weaned her when I did, I never would have had my youngest daughter, so things do have a way of working out. But while I was so grateful that I’d found a way to end our breastfeeding journey without making her feel rejected, truthfully it was every bit as bittersweet as the vinegar milk I’d used to wean her.