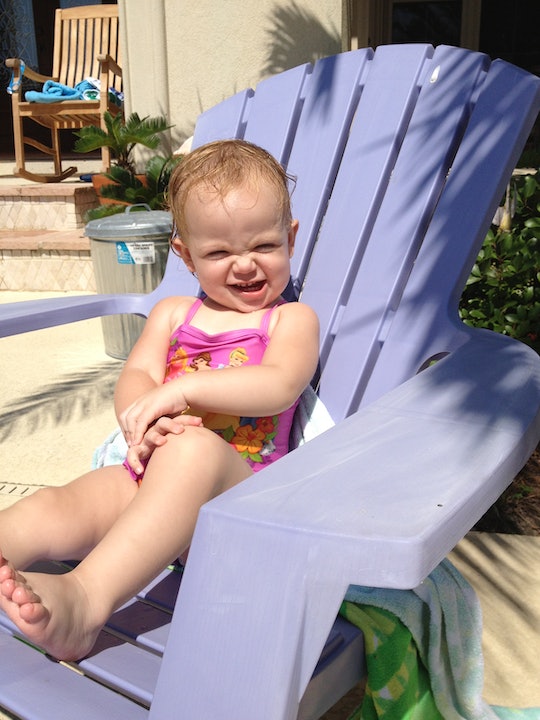 I Tried Weaning With Band-Aids, & It Worked Like A Charm

I'd only intended to nurse my kids until they were a year old. I'd assumed that on their first birthday they'd seamlessly graduate to a sippy cup, and then I'd part ways with breastfeeding. But then a year came and went, and they were still nursing. They were largely attached to the boob for emotional reasons: when they fell down and skinned their knees, nursing made them feel better, and it was the nightcap they needed to help them doze off to sleep at night. So I kept breastfeeding long after a year was over — not because I had anything to prove, but because it made my life a little easier.

Just before my oldest daughter turned 2, however, I caved under the social pressure to quit. As much pressure as there is on moms to breastfeed, there's an equal amount of judgement when we breastfeed past a year. After that, people assume you're just “doing it for attention” or that you're doing it to feel better about yourself as a mother.

When it was time to wean my oldest, the weaning method that worked for us was a quick spritz of apple cider vinegar on the nips before she nursed. But when it came to my second, nothing worked — until I discovered weaning with Band-Aids.

I decided to wean my younger daughter about six months after she turned 2. One weekend, I knew I was going to be going out of town, and I wanted to make sure she had other soothing methods in place before I left. She only had a few nursing sessions at that point anyway, so I thought that weaning her would be easy.

I had the apple cider vinegar bottle ready by the nightstand, but I should’ve known by the way that baby loved lemon wedges that pickled nipples wouldn’t be a problem for her. Day after day, she powered through the vinegar and kept nursing. Eventually, I resigned myself to the idea that she’d just be one of those kindergarten breastfeeders, and there were certainly worse things than that.

Then I remembered how much she hated Band-Aids. I think it had to do with her getting vaccines at the doctor's office: every time she got a shot, the nurse would immediately cover it with a Band-Aid, and I think her brain associated the Band-Aids with pain.

One night, I was trying to get in the shower, and she toddled into the bathroom. The sight of my naked boobs was like popping the top off an ice-cold beer. Since the bar was already open, she wanted to knock one back. I, on the other hand, just wanted to shower in peace for a few minutes without anyone pawing at me.

"Mama’s boobies are a little owie," I sadly told her.

So I told my daughter that my boobies had bobos. She’s a compassionate child, so just the thought of someone being injured concerned her — especially since it was her milk jugs that might be damaged. I told her I needed to rest in the shower for a minute so they would feel better. But I could see the compassion on her face when she said, “Aww, I’m sorry, Mama. Your boobies have bobos?”

“Yeah, Mama’s boobies are a little owie," I sadly told her. To be fair, it wasn’t a lie. She’d been cutting some molars, and when she cut teeth she tended to clamp down a little hard on the nip. So I was pretty sore.

When I got out of the shower, I saw the box of Band-Aids sitting on my counter. I didn’t know if it would work, and I was a little worried about ripping a Band-Aid off my nipple. But I slapped one Band-Aid over each nipple and walked out to get dressed. She was laying on my bed playing with her stuffed puppy when she looked up and saw my bandaged boobs.

I didn’t say anything as I got dressed, but she came over to investigate. “Your boobies have bobos?," she asked again. I told her yes, but they’d be okay in a little while. I put my pajamas on and laid down in bed to snuggle up with her and read. She kept looking over at my chest, and at one point, she just put her little paw right on my boob and patted it, as if to say “Get well, soon friend.”

Over the next few days, she kept asking if my boobs were feeling better. Each time, I sadly told her they were a little better, but they still had Band-Aids. I was surprised at how much empathy a toddler could have for another person, because other than newborns and politicians, toddlers are the most self-absorbed people in the world. But she was so worried about my well-being that she put her nursing needs aside until I felt better.

It turned out to be her breastfeeding swan song.

After a week of no nursing, I stopped replacing the Band-Aids. She saw me get in the shower, and she asked if my boobies were better. I told her they were, and she seemed relieved — but not for herself. She genuinely seemed glad that I was going to be OK.

She asked to nurse one more time after the Band-Aids, and I let her. I’m glad I did because it turned out to be her breastfeeding swan song. I can vividly remember lying in her bed and letting her nurse, knowing it would be the last time. As my kids get older, I've started to become very conscious of the "last time." I know there will be plenty of “last times” for things as my kids get older, and I'm glad my youngest child gave me one last time to remember. I'm happy that the Band-Aids gave me a chance to gracefully ease out of my breastfeeding journey.