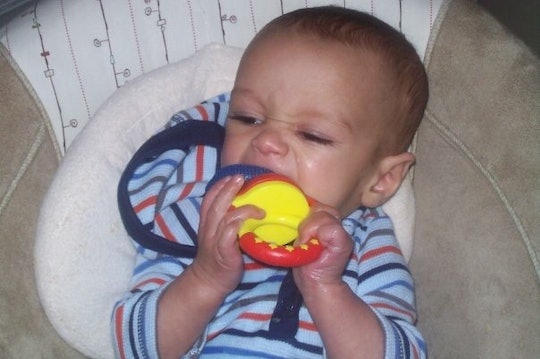 I Tried Whiskey As A Teething Remedy, Because I Thought It Was Harmless

Some milestones are great, Instagram-worthy, baby-book-ready moments, like the first time your baby claps, smiles or crawls. But others are the kind of thing you panic-Google in the middle of the night, like that 4-month sleep regression, the first time they roll off the sofa, and the lead-up to the rupture of that first tooth. When my eldest baby went through it, I did what I thought was right, and put whiskey on the gums as a teething remedy — I didn't realize this was a no-no. He was fine and the short story is: it worked. Would I do it again now that I know 0/10 pediatricians would let you try it? Nooooo.

Teething is awful. It’s snotty noses, red cheeks, fevers, itching gums and uncomfortable little babies. It’s enough anguish to make a parent desperate to try anything — which is the place I found myself in when my oldest son Phoenix started teething. I was only 21, so a young mother who didn’t have any other friends or resources to call on other than my own mother. Once teething started and the sleepless nights kicked in, I put a call in to my own mom desperate to figure out how to get relief.

My mom has eight children and she’s done a pretty good job of turning out some impressive kids. So when she gives me parenting advice I tend to listen (unless she tells me my daughter doesn’t need any more bows; I tend to ignore that because I don’t need that kind of negativity in my life).

When I called my mother desperate for help for Phoenix, I was a little shocked when she told me that she used whiskey on our gums when we were teething. That is, I was shocked, but just desperate and tired enough to try it.

Using whiskey, brandy or rum for a cranky and teething baby is an old wives’ tales that dates so far back that even the internet couldn’t give me an exact date. It’s believed that rubbing a little bit of the liquor on your baby’s gums will help reduce some of the discomfort. At least as far back as the mid-1800s, doctors were recommending giving infants a hot toddy to help them to sleep.

The idea of applying alcohol directly to the gums turns out to be less about numbing the area with a topical, and more about, uh, helping your baby fall asleep. Pediatrician Dr. Jarret Patton tells Romper via email that "whiskey on the gums is as outdated as biting on a bullet during surgery. Although there was some thought that alcohol produced some mild anesthetic properties on teething gums, it is more likely that it just helped to put the baby to sleep." So that's why it was so popular.

But for people like myself who cluelessly used one of the oldest tricks in the book, he says that no long-term damage has likely been done. "If someone accidentally rubbed a little on their baby's gums it is unlikely to cause any harm," he says, adding, "it won't help either." In fact, the risk in using whiskey is the same as that associated with products like Orajel, which are no longer recommended for teething relief. "There is additional concern that if a baby swallows the medication, the back of the throat can become numb and adversely affect the ability to swallow," Patton says. Instead, parents should use acetaminophen or ibuprofen for severe teething pain — but not continuously, he says.

But I didn't know all this then.

After my mom assured me that everything would be fine, I headed to the liquor store, grateful that now that I had turned 21 I could complete this important mothering task all on my own.

My husband was a little suspicious but was just as tired as I was. So we tried it… and Phoenix kind of liked the taste… and he kind of settled down. So I went back and bought another tiny little bottle and kept it in my diaper bag for when we were out.

I know right now you are reading this with a horrified look on your face. And I’ll be honest… I’m a little horrified with myself. But again, I repeat. Desperate times call for desperate measures.

Later on when we had other kids I always had this little “trick” in the back of my mind, but I assure you we didn’t use it. It wasn’t so much that I was afraid it was bad or would cause any sort of damage it was just that I found something so much better — a Baltic Amber teething necklace.

Whenever this question comes up with other moms in parenting forums people are shocked when others suggest it or say they’ve tried. I often stay quiet. I’ll admit that it’s slightly outdated and almost borders on crazy. But I don’t regret trying it. Phoenix is still alive and kicking.

Parenting is a nothing but a series of experiments and you can only get to success after a bunch of trial and error. We tried whiskey, it sort of kind of worked and that’s our story and we stick to it.

More Like This
What Is RSV?
Are Babies Lonely In The NICU? Here’s What Experts Say
How To Get Boogers Out Of A Baby's Nose
Can You Mix Breast Milk & Formula? Experts Weigh In