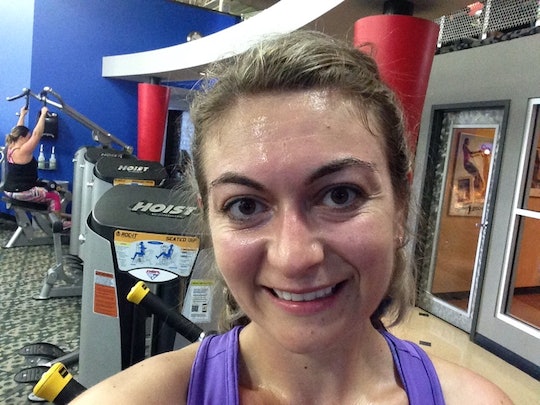 As much as I loved my twin boys when they were born, I didn't feel the same way about my postpartum body. Months on bedrest made my muscles and joints loose, and on top of that, I was recovering from a c-section. My new body felt totally strange and unfamiliar.

Before I became a mom, I used to live for exercise. Seeing how far I could go on the elliptical or being able to lift a heavier weight than the week before used to make me feel powerful and sexy. Instead, I had a slowly healing c-section incision and sore knees that left me shuffling from the cribs to the couch and back. My body was a suit of skin I didn't recognize or feel comfortable in — that is, until I started going to Zumba.

12 weeks after my delivery, I was cleared to go back to working out again. I thought I'd be excited to get back to my old fitness routine, but instead it felt like torture. I would stare at the clock throughout an entire 20-minute video, counting the seconds until I was done. Often, I'd tell myself my movements were causing the babies to stir, so I'd have an excuse to stop and go back to my spot on the couch. I was frustrated with how weak my body had become during pregnancy and I didn't recognize the silhouette I saw in the mirror as my own.

I confided all this to a long-distance friend whose own child was a year older than my babies. She suggested I try a Zumba class. Zumba is a Latin-inspired dance fitness class. Each class can have anywhere from 10-15 songs, usually hits you're currently nodding along to on the radio or throwbacks that you know every word to. Each song has its own routine and the instructor demonstrates the moves at the front of the class using mostly non-verbal cues. Some of the dances are hip-hop inspired, while some are cumbia, salsa or merengue.

At first, the idea of going to Zumba seemed like the exact opposite of what I needed. I love to dance, but the only formal dance training I've had was one year of ballet when I was 7 years old. I wasn't sure I'd be able to keep up. Plus, I was already unhappy with what I saw when I plucked up the courage to look in the mirror. I was already insecure about my body. Going into an exercise studio lined with mirrored walls and starting at myself for an hour straight seemed like the exact opposite of what I needed. But I agreed that something had to change, so I promised her I'd give it a try.

I was already insecure about my body. Going into an exercise studio lined with mirrored walls and starting at myself for an hour straight seemed like the exact opposite of what I needed.

My local gym has classes, so I dusted off my membership card and went. I spent the entire first class clinging to the back wall, trying not to draw attention to myself. I was positive everyone was staring at me and judging how my legs looked in my yoga pants. Everyone seemed to know the moves to the dances without looking at the instructor. They were like extras in a Katy Perry video (Teenage Dream-era, none of this culturally appropriative Witness nonsense).

As the hourlong class flew by, I was dripping sweat without even realizing I was working that hard. I loved the soundtrack and the moves that I was able to get. Plus, I was so busy watching my feet and trying to copy the instructor's moves that I really wasn't all that worried with how my body looked. Buoyed by endorphins, I decided to go back in a couple weeks.

Little by little, my body regained the mobility it had lost while I was pregnant. And while my stomach and boobs are forever changed by having twins, Zumba really helped me learn to love my body for what it is, instead of wishing it was something that it's not. When I catch a glimpse of myself in the mirror during class, I notice how awesome I look (well, for the most part) dancing in rhythm to the music, not the size of my arms or stomach.

Now I try to make it to Zumba twice a week, with the occasional weekend class if I really need to shake my stress away. I'm never going to be the best in the class, because my feet just can't move that fast, but when a routine isn't my favorite I know it's just three minutes until the next song and dance anyway. And if I really dislike a routine, well, I'm not above taking a well-timed water break.

Zumba really helped me learn to love my body for what it is, instead of making me wish it was something that it's not.

But I don't take Zumba classes because I want to be dancing on a stage some day. I do it because it makes me love my body and what it can do. At the end of a class, my heart is pounding and my clothes are soaked. Burning calories is great, but what's better is capturing that same feeling I used to get dancing in the club with my friends (only better because the cover is cheaper and there's no rando trying to push his erection up on my leg).

I also love how body-positive my Zumba class is. You're encouraged to show off your individuality and creativity in class. Women of all ages and with different body types wear brightly colored leggings or tops with cut-outs. We've even seen light-up shoes. I'm not one to rock a crop top on the streets, but in Zumba? Try and stop me. The class gives me a confidence I don't have anywhere else.

After years of taking the same class with the same women, I'm part of a community. We don't judge each other by our appearances or compete for the front row in class. We share details about our lives before class starts, and between songs we cheer each other on when the footwork feels impossible. We encourage each other to climb on stage with the instructor and laugh at ourselves when we forget a move. When I'm at a Zumba class I couldn't care less about the number on the back of my pants, or how my stomach looks as I pump and jump. I only know how amazing I feel.

Trying Zumba after becoming a mom definitely helped me bring my sexy back — which is apropos, because that's one of my all-time favorite Zumba throwback songs.