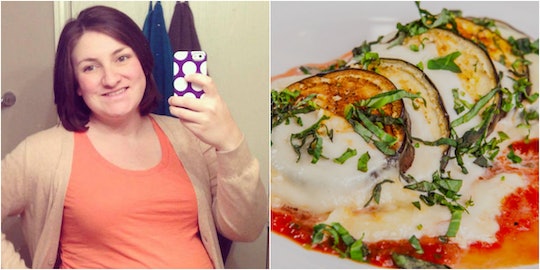 I Ate Eggplant Parmesan To Try To Induce Labor

Pregnancy is magical and beautiful, but let’s be honest here: by the time you make it to the final month, you are more than ready to serve your baby with an eviction notice and kick it the hell out of your uterus. By the last trimester, your ankles are swollen, you’ve got jowls, your back pain is off the charts, and your boobs are steadily leaking. To make matters even worse, the only light at the end of the tunnel is your due date, which is really more of a polite suggestion than anything else and could be off for a week or more.

It’s no wonder why many women turn to things like spicy food, nipple stimulation, or even red raspberry leaf tea to try to induce labor. Most of these remedies are dismissed as old wives’ tales, but when you’re desperate to go into labor, you’re more than willing to suspend reality for a second. That’s the exact mindset I found myself in when I was 40 weeks and 2 days pregnant with my son, or about a week past my due date. I read about an eggplant parmesan recipe from a restaurant called Scalini’s that was said to induce labor, so I whipped up a batch of this so-called “magical” eggplant parmesan to try to kickstart my labor.

According to the website for Scalini's, an Italian restaurant outside of Atlanta, Ga., the eatery's eggplant parmesan is notorious for sending women into labor within 48 hours of eating it. The restaurant claims that more than 300 babies have been born as a result of moms eating the eggplant parmesan, and there's an entire section of their website devoted to these so-called “eggplant babies,” complete with photos and labor stories from many of the moms.

I don’t live anywhere near Atlanta, so I couldn’t make it to the restaurant to try the eggplant in person. Luckily for me, Scalini's posted the recipe online so I could try to recreate the magic at home.

As soon as I finished my serving, I sat there and stared at my belly like, “Okay. I did my part. Now it’s your turn. Let’s pop that sucker out.”

The recipe intrigued me. At 2 days past my due date, I was showing exactly zero signs of labor. I wasn’t dilated, and I hadn’t yet lost my mucus plug. My doctor estimated my son weighed more than 8 pounds, and she wanted to schedule an induction that Friday, so we wouldn’t have to worry about him getting too big. It wouldn’t have been my first induction — I was induced with my first child at 41 weeks — but I desperately wanted to go into labor naturally, so I decided to take matters into my own hands and make a sh*tload of Scalini's famous eggplant parmesan (as seen below, in a photo taken by another patron).

I waddled into my local grocery store and stocked my cart with eggplant, tomatoes, bread crumbs, parsley, bell peppers, and three different kinds of cheese. Then I spent an afternoon in the kitchen, lovingly crafting the Scalini’s marinara sauce and carefully slicing the eggplant. As I prepared the dish, I found myself growing more and more anxious, as if there was a possibility I’d take one bite and my baby would shoot out of my womb onto the kitchen table. I also found myself coming up with all sorts of questions about this magical eggplant dish: Do I need to eat more than one serving? Should I eat the entire pan just to make sure it works? And why would this send me into labor in the first place, anyway?

My partner doesn’t even like eggplant, but that night we both sat down to heaping plates of eggplant parmesan and salad. I shoveled mine into my face, as if it might somehow work faster if I nearly choked to death while eating it. As soon as I finished my serving, I sat there and stared at my belly like, “Okay. I did my part. Now it’s your turn. Let’s pop that sucker out.”

I was getting that baby out of me, even if it meant buying up all the eggplant in the immediate metropolitan area and starting my own little Italian restaurant right there in my apartment.

The next morning, I ate eggplant parmesan for breakfast. Then, I ate it again for lunch. My induction was scheduled for the following evening, and I was getting that baby out of me, even if it meant buying up all the eggplant in the immediate metropolitan area and starting my own little Italian restaurant right there in my apartment.

I didn’t go into labor within 24 hours of eating the eggplant parmesan, but the website said it sometimes took 48 hours, so I held out hope. I went for a nice, long walk and had sex with my partner, hoping the physical activity would send me to the hospital 9 centimeters dilated. By that afternoon, I started actually feeling some small contractions. As I packed my hospital bag, they got even stronger. That evening, when my partner and I got in the car to head to the hospital, I wasn’t sure I was in labor, but I knew based on the amount of pain I was in that something was definitely up.

When we arrived at the hospital, my doctor checked my cervix and told me I was 4 centimeters dilated and I wouldn’t need to be started on Pitocin unless labor stalled. I thought about the sheer amount of breaded eggplant and tomato sauce I’d consumed in the past 48 hours and felt justified, because I was finally in labor. About 22 hours later, my adorable, 9-pound son came into the world.

I have no idea if my son qualifies as an eggplant baby or not. My contractions could’ve been brought on by the food, or they could have come from the long walks, the sex, or even just my body’s natural cues that it was time to get the party started. But as with most of the tips and tricks we use to try to induce labor, I think whether the induction method was successful is kinda beside the point.

At the end of the day, most pregnant women are equal parts uncomfortable and anxious to meet our babies. As much as we crave the experience of watching our bodies perform miracles, we’re terrified of labor. For most of us, our DIY attempts at induction are really an attempt to channel our hopes, fears, discomfort, and excitement into controlling the uncontrollable, into having a say in the when, why, and how of our babies’ grand entrances into the world.

Underneath the cankles, chin hair, and swollen feet that accompany the third trimester of pregnancy is the reality that, by the end of it all, we are so, so ready to be moms to the little people we’ve created that we’d even eat an entire pan of eggplant parmesan to make it happen.

More Like This
What Foods Fight Nausea During Pregnancy?
Can Dogs Sense Labor? 5 Signs Something Might Be Up
Score Big On Super Bowl Sunday With The Best Frozen Apps From Trader Joe's
41 Costco Appetizers To Level Up Your Super Bowl Party
What Parents Are Talking About — Delivered Straight To Your Inbox