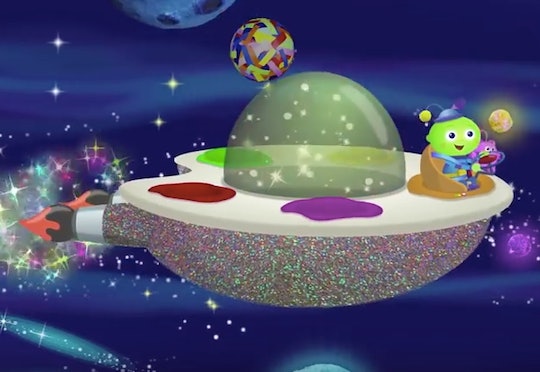 I grew up in a household that valued the arts, where my parents not only tolerated it when my sister and I choreographed dance routines to Backstreet Boys songs, but pulled out the camcorder to capture our moves. When I came home my senior year and told my mom I wanted to be a living ballerina statute for my theater class final project, instead of rolling her eyes she high-fived me, and my dad ran hardware store to get the materials we'd need to build a life-sized jewelry box. And when I had my twin boys three years ago, I was excited to help them discover their creative sides. I wanted them to grow up like I did, feeling like the sky is the limit as to what they can create. But I quickly learned that even in the realm of preschool media, cartoons tend to limit dance, singing, and art as activities that are more acceptable for girls than boys. I had no clue that shows like Creative Galaxy could help get kids excited about the arts.

Sometimes, when characters on the shows my boys regularly watch start to dance, they stop themselves and say, "Twirling is for Katerina Kittycat and I'm a tiger." And there's been more than one occasion where, if I catch characters on the show singing and start to clap, my boys will ask me, "Annie (from Little Einsteins) sings, can I, too?" I wanted to find an age-appropriate example for my boys that could show them art wasn't just for girls, but I kept coming up empty-handed — until I stumbled upon Amazon's Creative Galaxy.

There I was, binge-watching One Mississippi for the second time, when my kids woke up from their nap and demanded to watch something. Usually their Amazon go-to is Daniel Tiger's Neighborhood, and Prime's got a ton of seasons because they know what parents need to survive: educational cartoons and cheap prices on bulk diapers. But that day the boys declared themselves bored with O the Owl and wanted to watch this little green alien show instead. I had no clue what it was about, but since I didn't want to get off the couch, we hit play.

It turns out Creative Galaxy was exactly what I was looking for. Arty and his sidekick Epiphany travel to different art-themed planets to create things in order to solve problems in his everyday life. It's a show that introduces children to all aspects of art. From dance, sculpture, crafting, painting, architecture, music, and more, they cover it. And it's done in a way that's totally gender neutral. No pink tutus for girls or boys-only superhero scenes to be found. Oh, and extra awesome points? Samantha Bee plays the voice of Arty's mom. And Melody? Yeah, you're right, that is Lisa Loeb.

I read through the episode descriptions online and handpicked a few to screen with my boys to see if they could learn from Arty that "anyone can make art."

Going To Groovopolis, The Disco-Ball Planet

Since dancing holds a special place in my heart, and because it hurts to hear my boys say that dancing is only for girls, I decided to start there. We watched " The Birdie Ballet/Arty's Instruments" episode so my kids could see Arty enjoying music and movement. And I'm proud to say that my plan totally worked. My boys now want to watch that episode all the time and they don't shy away from dancing anymore. But the funniest part of it all was that now they consider themselves experts in all things movement related.

When we were done, they hung them up and declared them "masterpieces," just like in the show. They may never, ever let me take those pumpkins down, but I'm proud of them for seeing the value in doing something creative.

The other night I was doing yoga and had some trouble holding a warrior 3 pose. "Try to look at one place, Mom," Lolo told me, repeating the line from the cartoon. "It will help you balance." Thanks, buddy.

Usually my kids will scribble with markers for only a couple minutes before they grow bored and start trying to draw on themselves instead. I love doing crafts, but they rarely seem interested in participating. But after watching Arty and Seraphina work on pumpkin sculptures in the "Arty's Boo-tastic Halloween," episode suddenly they were the ones asking me if we could do a pumpkin craft. Their paper pumpkins won't ever hang in the Met, but for 20 minutes they were super focused on creating these pumpkins. In fact, thinking this craft project would quickly be abandoned like the rest of them, I only grabbed orange construction paper. But it was the boys who asked me to get green for the stems and then pleaded with me to find some black paper so their pumpkins could be jack-o-lanterns. When we were done, they hung them up and declared them "masterpieces," just like in the show.

I don't want them to grow up thinking that boys shouldn't show their emotions, so this was a fantastic episode to watch with them and I'm really glad it's one of their favorites.

They may never, ever let me take those pumpkins down, but I'm proud of them for seeing the value in doing something creative.

At 3, my kids are at a age when they have lots of feelings, but not necessarily the vocabulary they need to express their emotions. This frustration with not being to tell me how they're feeling is the reason behind at least half of their meltdowns (the other half is a mix of when they get too tired, are fighting over sharing toys, and when I won't let them have cookies). So when we watched " Epiphany's Dino Dance/Epiphany and Eureka," I was really excited to see that it wasn't just an episode about dance, but also an episode about what people's bodies and faces look like when they're expressing different emotions. Now my boys will come up to me when they're sad (or just feel like showing off) and say, "This is my mad face; this is my happy face!" and mug for me.

I don't want them to grow up thinking that boys shouldn't show their emotions, so this was a fantastic episode to watch with them and I'm really glad it's one of their favorites.

Like most kids, making blanket forts has always been a rainy day staple activity for my boys. But thanks to Creative Galaxy, they now have new respect for the process and are better about not tearing the fort down once I make it. We watched the "Arty's Art Walk/Arty's Fort" episode where Arty learned about architecture and that forts can be art. (They also make a giant fort out of milk jugs in this episode, which is way cool and my kids are begging me to do, but who has that kind of storage to save that many milk jugs?), and ever since watching, my boys have been obsessed with crafting their own forts for the long haul. It's cool to see that even at such a young age they're starting to understand how expansive the concept of creativity is, and how they should be careful not to damage other people's creations.

I know that my kids are their own people and that I can't force them to be interested in things they don't naturally gravitate towards, but I would hate for them to feel like they can't do certain artistic activities that are seen as "girly" by some members of society if it's something they truly enjoy. I want my kids to grow up feeling free to express themselves creatively, and fortunately Amazon's Creative Galaxy is a fantastic show to help them do just that. The free two-day shipping that comes with Prime is a pretty nice perk, too.