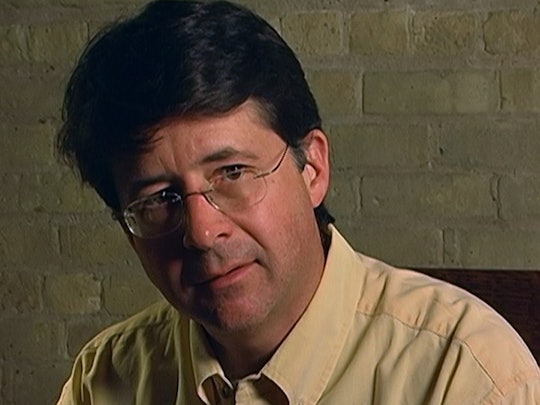 I Used Dean Strang Quotes On Tinder & Here's What Happened

Netflix's true-crime documentary series Making a Murderer has allowed people to do something that they love: smoke a metaphorical cigar, put on their detective hats, and squint at Reddit threads for hours because they believe, in some other life, they really were meant to find the missing piece of evidence that will get Steven Avery or Brendan Dassey a new trial. People have become obsessed with the series, its faces, the key locations cited in the trial, and the Avery family. But the Internet has become especially obsessed with Dean Strang, one of Avery's defense attorneys whose commitment to fairness in the justice system is just, well, downright sexy. There are even t-shirts that say things like "Jerry Buting [Avery's other attorney] in the streets, Dean Strang in the sheets." So, I wondered, could Strang's brilliance actually get someone laid? To answer this crucial question, I used Dean Strang quotes on Tinder and put on my most serious investigative journalism hat. You know, for the sake of justice.

I wanted to use his most interesting quotes about justice, fairness, and innocence rather than just use random quips he said in the show. I mean, if I'm going to really test Strang's sex appeal, I have to use the quotes that have made the Internet so thirsty, right? It's just fair (which, you know, is really important when you're using a lawyer's quotes on Tinder). So, I scoured the Internet for quotes that made people want to buckle down, take the LSAT, and balance Strang's scales of justice, if you know what I mean.

Now, a bit of background: I am no stranger to online dating. Back in my college days, I had a blog where I tested dating apps and rated the apps based on how many dates they got me and how successful the dates were. I kind of did the same with Strang's quotes. Could Strang help me find my Jerry Buting? Would I find a man or woman to binge Making a Murderer with, or someone whose DNA I'd want to plant just in time for Valentine's Day?

I never had much success with Tinder in the past. I met my most recent long-term boyfriend on it, but that was in North Carolina, where people use Tinder differently than New Yorkers. (New Yorkers often use it to pass the time while they're pooping or drunk.) So, I was skeptical. I kept my profile relatively simple. I used normal-looking photos of myself and used one of Strang's more ambiguous quotes for my about me: "How's that for judgment on this day of judgments." Luckily, Tinder profiles are all about ambiguous quotes. And then, I began my search to hook someone who might understand why "Manitowoc" would make a good safe word.

At First, I Jumped The Gun Too Quickly (No Pun Intended)

I was so excited about the prospect of using Strang's quotes to wrangle someone who might be willing to whisper the Constitution to me while I fall asleep that I scared this first guy away. I found out that people respond much better to deep, philosophical questions about the nature of potential systemic bias in the criminal justice system if you say "hello" to them first.

But, really, can you blame me? No, you can't, because presumption of innocence!

I Learned From My Mistake, But Things Didn't Get Much Better

This guy obviously got more than he bargained for. He probably just wanted a simple "LOL. How's it going?" in response, but how do I have time for GIFs when — as Strang says in those irresistible wire-framed glasses — there's been a "series of systemic failings" in the justice system and, now, in my pursuit of love?

This Guy Played Along & Now Thinks I'm A Murderer

I tried a new strategy with this guy I'll call Jim. I opened with something normal, and then tried to casually segue into talking about the criminal justice system. Thankfully, that's relatively normal and acceptable in a city like New York. The first quote here was, "In some ways, being accused is to lose. Every time." Someone get me a towel, 'cause things are heating up in here!

Jim fired back quickly, and for a few seconds I thought he might be the one who could show me the long arm of the law, as my best friend would say. But, then, things got so passionate that I deviated from Strang's guidance and couldn't help but let my inner philosophy major out. (What's the point of having a useless philosophy degree if you don't unleash that sexy beast on Tinder?)

I brought things back to Strang, though, with my go-to "bones" quote, and then things got kind of weird. I tried to stay kind of philosophical, but it was too late, and Jim thought I was some kind of Tinder serial killer.

A sketchy emoji is the equivalent of a murder confession, apparently.

I just couldn't help myself. I thought about asking him, "What's your favorite scary movie?" next, but he never responded to the window comment, and really, I have no idea why.

Finally, I Found My Jerry Buting

After almost two weeks of endless Tindering, I finally stumbled upon a guy I'll call Jack. Jack didn't really play into the quotes at first, but his dry humor was intriguing in the same way Strang's argyle socks are magnetic. And he seemed to know his Making a Murderer stuff.

He could even pinpoint the quotes I was using down the the episode in the series. Needless to say, he could've slapped the cuffs on me right then and there. I stuck to quotes for a bit to really see if he was committed to the plight of justice enough to meet my bar (exam).

But, of course, I wanted to play into the breakfast-food talk, because who doesn't love breakfast and justice, especially when the two come together (like they could for Jack here).

The fact that he ponders whether he would give up a good burrito if it were tainted by bias or falsification just makes me want to see what he can do with his gavel, if he were in a court room, of course.

At one point I felt like Jack knew about this assignment and started saying things so he could set me up for quotes. It almost got too easy.

Strang's sex appeal apparently comes right through his words, because I'm actually going on a date with Jack. That's not a joke. As to whether Strang can help someone seal the deal — that question will be left up to the law ... of attraction.

All jokes aside, using Strang's quotes on Tinder was more than just fun: it taught me something about my approach to Tinder and online dating. I know, that sounds kind of ridiculous. But prior to this experiment, I kept my dating profiles relatively simple with a mix of serious and funny information. I included on my profile that I was a journalist and a feminist, and I would message people with questions about their work or their interests. Many of these messages would go unanswered. So, though many of these people above could be people I would never get along with in person, their responses (or lack thereof) to something as strange as Strang quotes was a great way to start conversation in a unique way. I could also tell just who might be more fun, and who (see the first guy who commented on my appearance) probably wouldn't be able to keep up with me in conversation on a potential date anyways.

Thanks, Strang, for teaching me about the flaws in the criminal justice system while also helping me get creative in my attempt to wrangle my Jerry Buting.