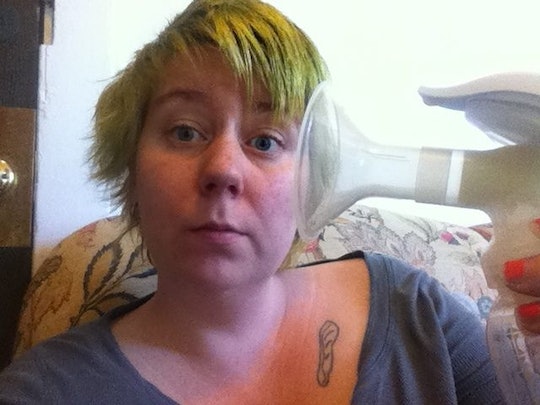 I Used Fenugreek To Increase & Maintain My Supply

In so many ways, I got extremely lucky when it came to breastfeeding. After some initially difficulty with latch, my kid and I quickly settled into a breastfeeding routine, and my breasts seemed more than happy to provide an adequate amount of milk for my growing baby. That is, my breasts provided just fine until he went on a major breastfeeding strike, and I was suddenly left scrambling to maintain my supply. I needed to make sure that I was still making milk, so that if my baby wanted to breastfeed again, I could be ready for him. I ultimately ended up using fenugreek to boost my milk supply, and it more or less did the job.

Fenugreek is an herb which has historically been used for many different medicinal purposes. According to Web MD fenugreek has been used to treat a wide variety of ailments, from diabetes to erectile disfunction to constipation. Web MD also states that there is insufficient evidence that fenugreek increases breast milk, yet it's one of the most commonly used galactogogues, which are, according to KellyMom, "substances that increase milk supply." Certainly when I started freaking out about my milk supply, it was one of the first suggestions I received, and when I needed to boost my supply, it was the first thing I thought to try out in an effort to make it work.

In my case, my son had always been a very dedicated nurser, until he got the flu and his very first ear infection in the same week. Suddenly, breastfeeding was either uncomfortable due to his ear, or impossible due to his congested nose. He stopped breastfeeding suddenly, and although he was technically old enough to wean, I had every reason to believe this was nothing more than a nursing strike. According to the La Leche League, self-weaning almost always happens incredibly gradually, and any sudden drop off in breastfeeding is to be considered a strike. I didn't want to wean my baby before he was ready just because he was sick.

After sobbing my eyes out while scarcely able to coax a few drops of milk from my boobs (sorry, not sorry for that image) I did what any millennial mama would do: I placed a late-night Amazon order for fenugreek tablets.

My aim, then, was keep my milk supply by pumping. But I’ve never loved the breast pump, and I quickly caught my kid’s illness. After a few short days, I found my once ample supply reduced to a meager two ounces a day. It felt like I was fighting my breasts to produce any milk at all, and honestly, I was in a panic looking for ways to increase what tiny amount of milk I had. When I shared about it on Facebook, my mom friends came out of the woodwork with support and suggestions (bless Facebook mom friends, they are the best people in the entire world). And there was one suggestion I kept getting over and over again: fenugreek. So, I figured I’d give it a try.

After sobbing my eyes out while scarcely able to coax a few drops of milk from my boobs (sorry, not sorry for that image) I did what any millennial mama would do: I placed a late-night Amazon order for fenugreek tablets. Have I ever been so grateful for two-day shipping in my entire life as I was at that moment? No, I have not. When it arrived on our front porch, I felt like a mother lost at sea, and the USPS delivery was offering me a life preserver. I tend to be a very pessimistic person in general, but I was desperate, so I was willing to view this bottle of capsules as my savior.

Twenty-four hours later, I was pissed that it didn’t work. When I complained to my wife, she immediately asked, “how much are you taking?” which turned out to be a reasonable question. In all of my parental anxiety, I hadn’t bothered to read the bottle very carefully, and I’d taken about half of the recommended dose (I was taking something like two or three 610 mg capsules a day, but the bottles recommends two capsules two or three times daily). That night, I upped my dosage.

The next morning, I woke up and immediately noticed a strange sensation: my boobs hurt. It was something I hadn’t felt in awhile, my boobs hurt because they were actually full. It was something of a shock. That morning I was able to pump an ounce and a half in one sitting, which, considering that the day before I barely managed to get two ounces all day, was a huge improvement.

Sure, it turned out that I didn't exactly need that milk boost in the long run, but I found that it did something more important than just giving me a little extra milk to remove from my boobs every day: it gave me peace of mind.

I stayed on the fenugreek for one solid week while I waited to see what my kid wanted to do. He seemed like he was very interested in breastfeeding but was nervous to try again, so I was just trying not to put my anxiety about that relationship (and my supply) on him. In that regard, the fenugreek was incredibly helpful. Between that and regularly emptying my breasts, I was able to maintain a slightly more reasonable supply. It was still lower than I’d like (I never got up to four ounces a day, which was my usual pumped amount from one boob per session when he was a newborn) but it was at least consistent; it definitely wasn’t dropping anymore. My body stopped responding well to the pump after a while, and I think if I had actually been breastfeeding while on the fenugreek, the difference may have been much more stark.

In the end, my toddler decided that after not breastfeeding for well over a week, he was ready to move on. What had started as a classic breastfeeding strike ended with him completely losing interest. When I realized he was no longer on the fence about it, I reluctantly accepted that the breastfeeding portion of our relationship had come to a close. I guess that’s parenthood for you: They grow up fast, and sometimes they seem to grow up all at once. At that point, I’d been on the fenugreek for one week, and I stopped taking it. My supply immediately seemed to drop again (though I was also no longer measuring it very carefully) and my breasts rarely felt uncomfortably full.

I could be upset that I tried fenugreek at all, but I'm not. Sure, it turned out that I didn't exactly need that milk boost in the long run, but I found that it did something more important than just giving me a little extra milk to remove from my boobs every day: it gave me peace of mind. As a breastfeeding parent, it can be totally nerve-wracking to have any kind of dip in supply. And anyone who has been through it will tell you that a nursing strike is its own special brand of stressful. That stress and anxiety was so much worse when I was also freaking out about my milk supply. In the end, our situation may not have resolved in the way I would have preferred, but because of fenugreek I feel confident that, even if I don't understand why my baby is done with the boob, I know it isn't because I couldn't make him enough milk. And to be honest, knowing I did what I could is the best comfort I've got right now.