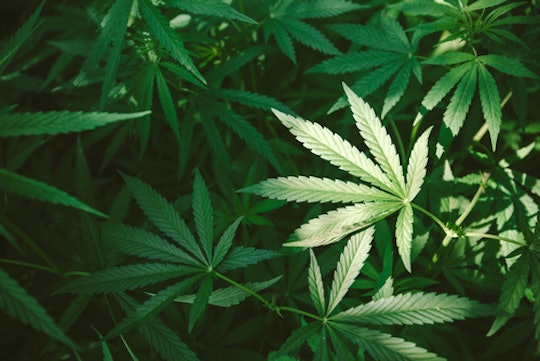 I’m a long-standing fan of cannabis. Although I can’t smoke it because it leaves me with asthmatic fits and has me breathing like a 90-year-old in spin class, I do enjoy it in other forms. Cannabidiol, or CBD oil (the non-psychoactive part of cannabis), helped lessen some joint pains I had some time ago, and I have a particular fondness for cannabis in my avocado brownies (yum). But hemp seed oil is definitely the holy grail of beauty products for me.

For the uninitiated, hemp seed oil is a type of vegetable oil that can be used in a variety of ways. It's often used in skincare products, but it's also used in cooking and preparing food. Because of its super low saturated fat content (there's only one gram of saturated fat in a tablespoon of hemp oil), some people like to use it as a dressing for their salads, or as a substitute for butter. It has a noticeably nutty taste and smell, mixed with a tangier, more fishy scent.

Hemp seed oil is purported to have a bunch of health benefits, including healing skin conditions, improving cardiovascular health and balancing hormones. But the main reason why I adore hemp seed oil so much is because I credit it with getting rid of my eczema, literally in the span of a few days.

I’ve had pretty terrible eczema all my life, and the affected areas (usually my inner arms and knees) were always bumpy, sore, rough, and dark. It was quite embarrassing going to school during the spring and summer and having itchy, scabby patches on my limbs.

My eczema persisted in my adult life, and it was always a source of embarrassment. I remember talking to clients at work while furiously scratching away at my arm like I had some sort of infection. My flare-ups would get so bad that I'd enlist my partner to scratch them for me, getting his fingers deep into the crevices of my arms and legs to soothe my irritated skin.

Traditionally, I've treated my eczema with anti-itch steroid creams like hydrocortisone. But the over-the-counter stuff barely made a difference. When I tried more hardcore prescription creams, they'd usually work, but the effects were only noticeable after a few days to a week. Then about a year ago, I decided to stop treating my eczema with products that had a long list of ingredients I couldn’t pronounce.

I wanted to try an alternative that was all-natural and toxin-free, so I did my research and came across hemp seed oil. I learned that it's been shown to reduce symptoms of dry, itchy skin: in fact, a 2005 study found that it helped reduce redness and itching in patients with atopic dermatitis (a fancy word for eczema).

Hemp seed oil is an oil that's extracted from hemp, a variety of the cannabis plant. (Before you even ask: no, unfortunately, you can't get high off of it.) Basically, here's how it's made: the seed is cleaned to remove all leaf matter and dirt, which ensures that any possible traces of tetrahydrocannabinol (better known as THC, the primary mind-altering ingredient in marijuana) from the plant's leaves don't pass onto the seed. Then the oil is extracted from the seed.

Hemp seeds are rich in protein, fibers, and omega 3 and omega 6 fatty acids, which are said to help expedite the body's healing and recovery process. They're also crammed with vital nutrients such as zinc, magnesium, calcium, and iron. But if you've never heard of it before, that's probably due to the cultural taboos surrounding cannabis use. Although the oil contains virtually no THC, some people are wary of its associations with marijuana. It's also possible that people get hemp oil confused with hash oil, an extremely concentrated form of cannabis oil that contains high amounts of THC. (So while hemp oil won't get you high, hash oil certainly will.)

I should be clear right now: I didn't consult with a doctor before I started taking hemp oil, though I did read up on the risks beforehand. Although side effects are rare, consuming hemp oil can lead some people to develop digestive difficulties, and there's some evidence to suggest that people with blood clotting conditions should not take it. (The oil also produces harmful peroxides when heated above 121 degrees Fahrenheit, which is why if you're cooking with it, you need to do so at a low temperature.) That's why I read the label beforehand and was careful not to consume over the daily recommended amounts.

From there, I started using hemp seed oil both internally and externally, taking one tablespoon a day and using it topically twice a day. When I took it topically, I found that it pretty much instantly worked as an effective anti-inflammatory: within two days, it smoothed out my skin and reduced the rough, spotty effects of my rash. I also found that it dramatically reduced the urge to itch and scratch the affected areas, especially my inner arms and inner legs where I’m more prone to flare-ups. It also helped to even out the dark patches that had formed as a result of my incessant scratching.

I also found that combining hemp seed oil with a few drops of essential oils has helped massively in getting the best results for my skin. Lavender, for instance, is my number one go-to when I get an eczema flare-up. The plant is purported to have strong antibacterial, antiseptic, anti-inflammatory and calming properties, and it definitely speeds up my skin’s healing process. (The floral scent is also delicious.) I also used geranium essential oil, a sweet-smelling oil that is said to have anti-bacterial properties.

The hemp seed oil worked like a dream, clearing up my eczema in just a few days. The only real issue I had with it is that it’s a drying oil, so for someone who suffers from dry skin, as I do, you might end up with a dusting of flakes around your face after you use it, especially in your T-zone area. So I started using another natural oil on top of it with more moisturizing qualities, such as sweet almond oil or apricot kernel oil. For someone with oily, acne-prone skin, however, hemp seed oil is a great option, because it's non-greasy and lightweight.

While my eczema appears to be going away, my 2-year-old son has inherited my condition, although his seems to be far more controlled than mine. And the next time he has a flare up, I'll definitely be using hemp seed oil on his skin, because the oil is completely safe for little ones.