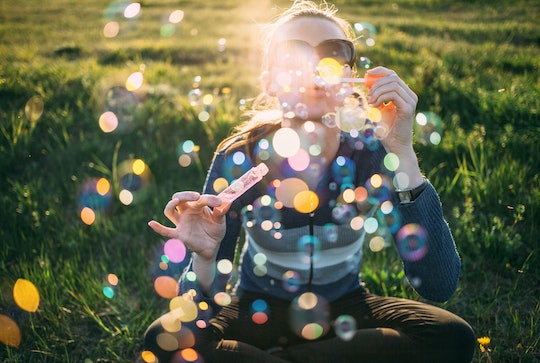 I Used Magic Mushrooms To Help With My Postpartum Depression

I'm the mother of a 9-month-old, and yeah, I tripped on magic mushrooms.

There’s pressure here to add subtext, to rush and explain why I’m a good mom. To half-apologize, like a teen whose parents found her stash, “It’s not mine!!! I didn’t do it!” Maybe I should add that I’m happily married, I’m a college graduate, I wasn't breast-feeding, I’m a third-grade teacher, I donate to charities, I…

But I don’t need to justify myself to you, because I feel deeply that it was one of the best things I’ve ever done for myself — and for the people closest to me.

The words “drugs” and “motherhood” usually don’t belong in the same sentence. It’s too bad drugs — all drugs — are known by the same word.

Some drugs bring death and destruction. Others promise hope and renewed life. At times this line is incredibly thin: a doctor prescribing OxyContin for pain relief after an injury can create an opioid addict. Rather than relying on black and white thinking and villainizing drugs as unconditionally bad, there needs to be a more nuanced view of the word.

I grew up in an incredibly religious family. The first time I found out my husband had smoked weed several times in high school before his Mormon mission, I cried. To be honest, I considered breaking off our relationship based on that one fact. Rather than thinking logically through the facts of his drug use, my mind immediately pictured the deadbeat in the house, couch covered in takeout containers. Now, I see it differently.

Drugs. It’s more about the who, why, where, and how — not just the misconceptions. Instead of a war on drugs, there should be an urgency to research and understand how drugs can be used to help people safely and effectively. That’s what psilocybin did for me.

After my son Joel* was born, I experienced the all too common phenomenon of postpartum depression. I wasn’t willing to confront the depression when it was happening, but now I can weakly admit to it. Though I’ve struggled with on and off depression my whole life, this wave of darkness hit hard.

My partner, Hunter,* was (and is) incredibly loving and supportive in both loving me and helping take care of Joel each day. He made calls to get me appointments with counselors and would talk through my depression with me. He changed poopy diapers and took night shifts.

Hunter, with hours of studying and researching, took LSD (commonly called “acid,” a psychedelic like magic mushrooms) once when I was six months pregnant. Looking up from his breakfast the next day, he explained that the emotional release of the experience had broken him apart and rebuilt him in an entirely new and wonderful way.

Initially I felt apprehensive over him taking what I viewed as a slightly terrifying, unknown drug. After reading and researching with him and talking through his experience, I was curious. So much of my reading outlined research into how psychedelics, specifically psilocybin, is highly effective in treating depression, soothing anxiety, and creating a sense of wellness.

The journalist Michael Pollan published a book this year called How to Change your Mind: The New Science of Psychedelics on his own research and experimentation with psychodelics, telling the Sydney Morning Herald’s Jane Wheatley, “People who seek psychotherapy or are unhappy have access to psychiatric drugs such as anti-depressants, I could imagine a time when they have access to psychedelics too. I can also imagine the existence of mental health spas, with doctors on hand to screen for suitability, offering a guided psychedelic experience.”

Almost a year after my husband’s LSD trip, Hunter planned on using mushrooms on his birthday as a second experience with psychedelics. He called a friend who graciously gifted some of his own stash. Though I knew he had them, he hadn’t told me where they were.

I found them while organizing the back of his wardrobe.

What if I just take these now? An absurd thought to fly across the mind of a mother with a 9-month-old.

But I thought it anyway. Depression was a dark cloud in the back of my mind, pushing forward. I closed the tin lid, covering the caps of the magic mushrooms in shadow. Maybe tonight once Hunter is home.

Once Joel was comfortably asleep in his crib, I told Hunter.

“I want to use your mushrooms.”

Eyes bulging, he was almost certainly thinking back to my anger when he admitted to smoking in high school and subsequent conversations when I was nervous about his use.

“Yes. If you’re willing to be with me while I try it and make sure Joel is okay.”

I watched a perfect tree from outside our window sway in the wind, and my body floated a few tiny centimeters off the ground.

A little while later, tears streamed out the sides of my eyes, down my cheeks and on to the ground, where I was laying on my back. Behind my eyelids, intricate patterns kaleidoscoped in and out of each other and a bright black dance. It was absolutely beautiful. I recall repeating to Hunter, “words are too flimsy.”

With grounded euphoria, I watched a perfect tree from outside our window sway in the wind, and my body floated a few tiny centimeters off the ground. There was a warmth in my heart and a sense of gratitude and well-being I didn’t realize I was capable of experiencing.

During my trip, I wasn’t just seeing pretty colors and feeling the warm and fuzzies. Many studies like this one in The Mental Health Clinician highlight the potential of magic mushrooms to essentially “reset” certain areas of the brain well known to play a role in depression. Since my mushroom trip, I have fallen in love with the world more completely. My rebooted brain is chemically different than it was before.

A single trip didn’t “cure” my depression, but it did leave me with an undeniable sense of goodwill and peace to rely on during any difficult moments of my day or week. When I look out the window, play with Joel, or take a walk, I see more beauty than before.

Self medication is not the best option when making choices with your health. There should be legislation that makes it easy to study drugs like psilocybin which have great scientific potential to help a lot of people. Cities like Denver, CO, and Oakland, Calif., have already decriminalized mushrooms and other natural psychedelics. Politicians like Rep. Alexandria Ocasio-Cortez (D-NY) have spoken out about making the study of shrooms easier.

Rather than shying away from stigmatized drugs, there should be a push for greater understanding, healthier responsible use, and access for anyone who could be helped by these substances.

I used an illegal drug. This doesn’t make me a bad mother or person. I used it responsibly and it improved my life. And I’ll do it again.

*Not their actual names.