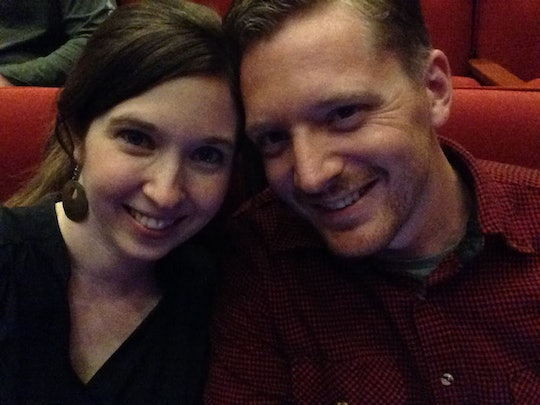 I Used Millennial Slang On My Partner, & Here's What Happened

As a millennial woman with kids, I like to think that I’ve not yet slid completely off the grid when it comes to what’s new and happening in the world. (Do people even say “happening” anymore? Ugh.) As someone who’s interested in linguistics — I feel my cool factor going down already — I assume that I’m up to date on the all the terms, language, and Millennial slang people younger than me are using. But when it comes to “what the kids are saying these days,” I have to admit, I’m starting to get a bit lost.

My kids are only in the preschool and below stages of life right now, so I figure if I’m going to keep up with them, I need to really focus on staying on top of the pulse of cool new lingo. I know, I sound like someone’s old uncle who’s trying too hard to be cool, but I dread the day when the new version of “Netflix and chill,” starts to fly under my radar.

I cannot — I will not — lose my street cred this early in the game.

I decided to brush up on my trendy terms, using them for a week on my unsuspecting husband, because if I’m clinging to youth by my fingertips, he has already fallen off the cliff of coolness. It took a bit of research to find the terms I wanted to use and what they meant (what is this “on fleek” thing, anyway, and how do you know if you have it?), but I felt pretty confident in my mastery of the terms. That is, until I started my experiment.

What It Means: Have The Sex.

When I Used It: I first used the term on my husband when it was getting late and all the kids were finally sleeping, and you know… I had seen all sorts of articles explaining what Netflix and chill” means over the past couple months, so I figured my husband would get it right away. However, when I told him I wanted to “Netflix and chill,” he just stared at me and said, “but all the kids are sleeping, can’t we go have sex?” When I explained what it meant he was confused.

“Because that’s what the teens say so their parents don’t know. It’s like a secret code.”

Even after explaining it to him, the next time I used “Netflix and chill” he asked, “can’t we just do the chill part? We’ve been watching Netflix forever.” *Facepalm* (That’s still a thing, right?)

What It Means: A term of endearment, like “sweetheart” or “baby”.

When I Used It: I call my husband “babe” all the time. I know it’s ridiculous, but I’ve been doing it since high school, and over a decade later, it’s a hard habit to break. I thought I could sneakily replace “babe” with “bae,” but my husband wasn’t having it. The look of disgust on his face was unmatched when I called him “bae” while innocently asking for a glass of water.

“I hate when people say that,” he said. “People in the Bay Area say it all the time.”

“It’s OK if you did,” I told him. “I thought it was just a nickname for Beyonce for a really long time. It was a very confusing time in my life.”

“No,” he said, clearly not giving an inch. “It’s just a really obnoxious thing people say in coastal regions.”

I’m not totally sure he understands that the term “bae” exists outside of “coastal regions.” Wait, does it? I’m actually not sure. Oh god, I feel old.

What It Means: Perfect or “on point”.

When I Used It: When my husband came home with a new haircut I told him it was “on fleek.” Truth be told, I wasn’t sure if I was using the term correctly. When he asked me what being “on fleek” means, I told him it was the new version of “on point.” Luckily, Urban Dictionary backed me up on this one, and he kind of got over it. It didn’t make him as angry or disgruntled as “bae,” so, that’s a win, right?

Even though I felt like I didn’t really know how to use on fleek correctly, I still hoped I might be able to apply this same methodology of just looking it up when my kids are using all the “cool” terms. But then again, I’ll probably end up sounding like the desperate to be cool older uncle once more… Ugh.

What It Means: It’s a combination of “true” and “real,” and is a term to describe one’s authenticity.

When I Used It: First off, using “trill” made me feel the most out of touch. People in the ‘burbs may not use “on fleek” and “bae,” but they definitely don’t use “trill,” so I felt like I had no authority over the word. To be honest, it just felt strange to say it. “Trill” has origins in hip-hop and rap, from what I’ve gathered in my very questionable online research. So aside from the fact that I am definitely too old to be using it, I am also likely far too suburban, white, and matronly to be saying it, too. Nevertheless, I decided to use it when talking to my husband about how I wanted the article I was writing to be “trill.”

After describing the meaning of the word to him, he politely suggested that in the interest of being trill, I should probably stop using the word trill. He didn’t have to say why. His look said it all. I am way too old to be using trill in my everyday life. Truth.

What It Means: Being overwhelmed with emotion.

When I Used It: I actually use this term all the time, because I am often overwhelmed with emotion to the point where “I can’t even.” I used it most recently when my husband turned the tables on me, using the terms I’d been using on him back on me, all so I could see how truly ridiculous and obnoxious I was being.

I still can’t get him to stop texting “bae,” or trying to use “on fleek” in the correct manner (which I am convinced he will never master). I literally cannot even with this man.

Was I Totally Out Of Touch With The Youths?

By the end of the week, I realized that even if I wasn’t totally out of touch (I mean, I scored 100 percent on this How Well Do You Know Teen Slang? quiz!), I was most definitely past the point of using most of these terms in real life. I may not have thought so at first, but once my husband started throwing them back at me, I could see how desperately uncool I was being when using “on fleek” in casual conversation.

I did feel confident using “I can’t even,” because most of the time, I literally could not even with this experiment. I feel like my overwhelmed state as a mother has given me a firm mastery of “I can’t even.” It’s how I spend most of my life. Not even-ing.

As for the rest of the terms, I think I’ll save my dignity from now on and stick to my regular vocabulary. I realized not only am I not cool (at least if we’re using language as a gauge), but I also have very little interest in being cool (especially if it means using the word “bae”). If and when my kids start using terms I don’t understand, I’ll just look that sh*t up on Urban Dictionary.

More Like This
Ginger Zee Had A Perfect Response After A Troll Asked Her "Who's Raising Your Kids?"
How To Approach The Topic Of Emotional Labor With Your Partner
How To Ask Your Partner For Support When You Need It
This Is What Happens To Your Vagina When You Stop Having Sex