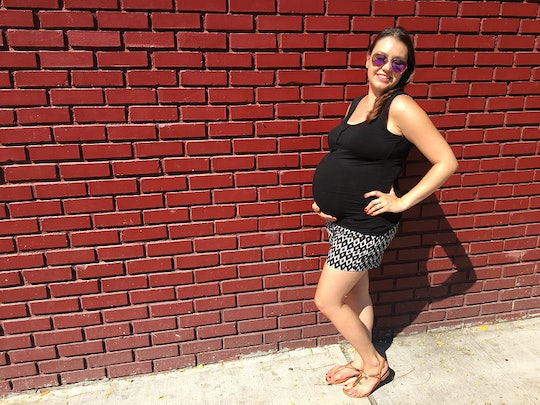 The temperature was reaching 90 degrees outside, and there was absolutely no way that I was leaving my tiny little New York City apartment bedroom. It was mid-August. I was nine months pregnant and beyond ready to get this baby out of me, so much so that I was doing pretty much everything possible to induce labor.

At that point, I was willing to try anything. I was eager to induce my labor quickly because my husband, who is in the army reserves, was scheduled to go away for a two-week training the week I was due. (He ended up getting out of it at the last minute, but it was incredibly stressful.) So when I was about 36 weeks pregnant, I bought multiple boxes, hoping that it would help get things moving.

Back in 1999, an extensive study was done by the Australian College of Midwives Incorporated Journal to test red raspberry leaf tea's effectiveness during labor, as well as its safety. They compared two groups of women: one that drank red raspberry leaf tea while pregnant, and one that did not. The outcome suggested that while red raspberry leaf tea didn't seem that effective at inducing labor, one unexpected side effect was found: women who drank the tea might be less likely to receive an artificial rupture of their membranes or require a c-section, the study noted.

Yet many midwives and birth professionals swear by red raspberry leaftea. Rachel Hart, a certified midwife in Atlanta, Georgia, told Momtastic that she recommends the tea to all of her patients. “But some women prefer to wait until after their first trimester to start, especially if they have a history of miscarriage,” she said.

The tea was not cheap — in fact, at Target, where I regularly stocked up on my pregnancy cravings, it cost well over $5 for only sixteen tea bags (I was buying at least three boxes at a time). But I made it work with our weekly budget because it felt like a necessity at that point.

You can brew red raspberry leaf tea hot by the cup much easier, but since the sun was scorching outside, I would brew it by the gallon (yes, gallon) using hot water and many, many tea bags, then I would put ice cubes in it. No one at home was allowed to touch my red raspberry leaf iced tea. It was meant for me and my lips only, in hopes that each refreshing sip would be working its magic downstairs. I drank about 5 glasses a day, alternating with water to make sure I stayed hydrated.

Did I feel that red raspberry leaf tea made a difference for me? Yes and no. I went into labor four days past my due date, so it did very little in terms of inducing labor and getting those contractions moving, but I do believe that it helped to make my labor much quicker than it would have been otherwise. I started with light contractions at 7:30pm on a Saturday, and by 3:55am our little one was born after just two pushes. But as for reducing pain, I don’t think that it played any role there whatsoever.

So contrary to what studies say, I think that drinking as much red raspberry leaf tea as I did during my pregnancy definitely helped to make for a quicker delivery. I would use it again in a heartbeat if we ever have another baby. At the very least, it was delicious.