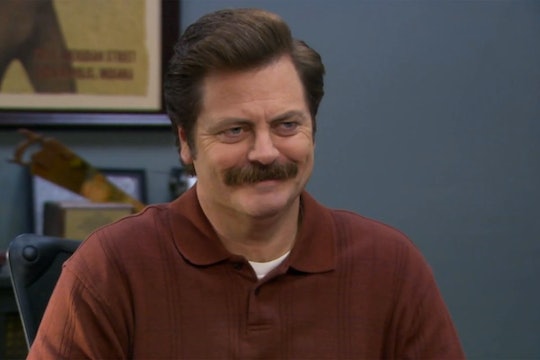 While Leslie Knope of Parks and Recreation is a true feminist hero, Ron Swanson is my fictional icon. Ron Swanson's quotes reveal that has a low tolerance for people, an appreciation of nature, he understands the value of hard work (so long as it isn't government work), and his ardent love of bacon brings a tear to my eye. I loved him so much I took an unpaid internship at my local Parks and Recreation office in college (it was not the dream-life of shenanigans I'd hoped for; it was actually pretty soul sucking and boring work). His nuggets of wisdom can help shape anyone's life, and he's the sort of mentor that you want in your life. Or at least the one I want in my life.

So why shouldn't I let his wisdom shape my children's lives? To be totally honest, there is no reason why not to. Ron becomes a parent later on in the series (not even apologizing for that spoiler, you guys), but his quotes on life, liberty, and the pursuit of bacon are acceptable for anyone at any age. Armed with the knowledge that Ron Swanson has life figured out right, I figured maybe imparting some of his no-frills life advice might serve my kids for the best.

I decided to spend a week doling out advice from the legendary Ron Swanson. I may not be able to guide them in the ways of hunting and fishing or teaching them how to drink whiskey straight (and, I mean, they're 5 and under, so they certainly do not need to know that), but I hoped that Ron Swanson's no-nonsense approach to life would help shape them into little Swansons. I mean, what could make a mother more proud?

Day 1: "Crying: Acceptable At Funerals And The Grand Canyon"

While I'm not normally one to advocate bottling up all your feelings, Ron Swanson most definitely is. I decided to dole this advice out when my kids were being over-dramatic (like when my daughter cries in front of my full-length mirror to ensure she makes the saddest face ... oh yes, it happens). My kids are still young, and the tears are free flowing in my home, but barely tripping over something or a tower being knocked down or getting pancakes instead of waffles is hardly cause for tears. Sadly, my kids seem to feel otherwise.

When I told them that crying was only acceptable at the Grand Canyon and funerals, my kids were none too pleased with my tear-policing. While telling a grown man not to cry may induce the "buck up" response that Swanson wants, telling a toddler to keep her tears in her eyes where they belong only leads to... well.. more tears, and much louder wailing.

I decided to let my nonchalance fly in the face of my children on day two by taking up Ron Swanson's "I don't care about that" attitude. I used Ron Swanson's "I don't even care" quote most often when my kids were telling on one another. Seriously, how have I raised such tattletales? Do they think there is some sort of prize to getting the other in trouble? I'd rather not chase after your sister every time she picks her nose, thankyouverymuch.

However, every time I responded to their snitching with "I don't even care," the first words out of their mouths without fail, were the infamous "BUT MOM..." No. No, "but mom." Does anyone ever "but" Ron Swanson? Well, maybe Leslie Knope. Maybe I'm just raising a bunch of little die-hard feminist Leslie Knopes. Yeah, let's go with that.

We went for the full spread: pancakes, fruit, and of course all the bacon and eggs we had. My kids seemed pleased with my breakfast food skills, and requested more breakfast for lunch and dinner. And you know what? In the spirit of Ron Swanson, I obliged. We had a day filled with breakfast foods, and because of it, there were fewer fights and meltdowns throughout the day. I think waffles were to thank for that small miracle, or maybe my kids were just hopped up on bacon?

On day four, I was not in the mood to deal with my whiny, yelling children. I woke up to the sounds of my baby whining long before I even opened my eyes for the first time. I was immediately affronted by the dishes I'd left in the sink the night before. I heard the recycling truck just in time to watch it pass by our house as I realized my husband had forgotten to take our can to the curb that morning. So I did what Ron Swanson would do, and I channeled my most frustrated feelings. "This is my hell" became the quote of the day.

Whenever things got too disorganized or the kids were at each other's throats on day four, I just calmly reminded myself that "this is my hell." It was oddly calming to repeat this negative mantra, because it allowed me to voice my disatisfaction with how badly my day was going without snapping at my kids or passive aggressively texting my husband. It was my hell, no doubt about it. Even though being honest about how sucky my day had been was a relief (it was nice not to lie to myself), it didn't exactly do much to improve my mood. I'm guessing Ron doesn't just "snap out of it," because of day four, neither did I.

Day 5: OK, This Is Still Sort Of My Hell

Instead of resisting my children the next day, I gave in. I let them run wild and just stayed on the ground while they mauled me. "This is my hell" may have still crossed my mind from time to time, but you know, sometimes you just need to take the path of least resistance to survive. Motherhood is hard.

The kids were particularly receptive to my begrudged acceptance of letting them do whatever as long as it didn't kill them. I realized that I could probably say yes to them a little more, even if it does mean a lot more cleanup at the end of the day or losing a bit of my dignity in the process. Also, it made me realize how many games can be played while you are lying down. (A surprising amount, in case you're curious!) When it was time for bed, my kids had enjoyed a great day. Me? Not so much, but when I thought about how much fun they'd had crawling all over me from sun up to sunset, I realized that it was worth it to give it and make more time to be fully in the moment with them.

It was fairly effective, especially when I would sneak up on them and catch them by surprise. However, when I found my son about to steal a marshmallow out of the cabinet, and I caught him by surprise, it definitely ended in lots of tears. Mostly because he didn't think he'd get caught. It was sort of sad, but mostly a hilariously brutal instance of karma with a Swanson twist. Also, asking him to re-think whatever bad behavior he was about to do gave him a chance to right his wrongs long before he ever made them. Sure, it was hilarious for me to say, but it also gave my kids a second to think about their decision and correct it. No one likes getting in trouble, and rethinking their moves helped keep them out of timeout for a little bit.

On day seven, my son came home from school after a hard day, and I could tell he wasn't in the mood to play or hang out with his sister. Instead of having a fit every time someone spoke to him (which is his usual go-to), he decided to spend some alone time building Legos until he felt ready to hang out with everyone. And before he came out to rejoin the family, he decided to clean up his room. Perhaps all my Swanson parenting was translating into a naturally hard-working son? Maybe it was a fluke. Either way, I told him I was really proud of him, so I told him. And you know what? It was the best Swasonism of the week. Taking that sort of initiative and showing that level of emotional maturity would make Ron Swanson proud too, and I know that my son appreciated the praise.

Having that time to himself to decompress and cool down helped him enjoy the rest of the day with a good attitude and a better mood. It'd be impossible not to be proud of him for that.

Did Channeling Ron Swanson Make Me A Better Mom?

Ron Swanson's tough-as-nails approach to doling out wisdom is probably best suited for adults, though there's nothing wrong with a few Swansonisms here and there while raising kids. In fact, I think it would do my own brood good to think twice about their moves, take pride in hard work, and eat a bit more bacon. However, as much I may love Ron Swanson, let's face it, I'm never going to be him. For starters, he's a fictional character. And as I'm raising my own kids, I want to be able to express myself emotionally and be a little soft with them — qualities that aren't exactly Swanson in nature or in action.

I want my kids to know that being vulnerable and emotional and getting it wrong is OK, and I want them to know that they can come to me with anything, no matter what it is or when it happens. Though I'm sure Ron is the type of dad who treats his kid the same way behind the scenes on the show, Ron Swanson is very much a character designed to fit the needs or the show, not real life. So I probably will never master woodworking or whiskey drinking, but hey, a girl can dream, right?