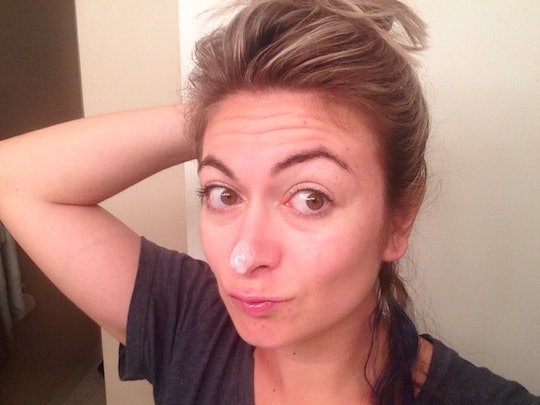 I Put Snail Mucus On My Skin For A Week

One of the latest ways people are trying to look forever 21 is with a snail facial, a procedure where you put tiny punctures in your face via microblading and then allow a snail slime infused serum to settle into your skin. The procedure is supposed to fight pimples, fade your dark spots, and plump up your skin. If you don't live near a spa that offers the treatment, luckily there are tons of snail creams on the market that are supposed to give you the same benefits with consistent use.

I've never shied away from a challenge and I love being on trend with what's new in beauty, so I totally volunteered to give my face the snail treatment. I used snail cream on my face for a week, and this is what happened. (Before you ask — no, I didn't eat them.)

Unfortunately, putting snails on your face wasn't part of the routine. I'd imagined having cool, soft snails sliding over my face would be quite relaxing, but apparently you'd need 75 of them on your face at one time to see any effects, so it just wasn't feasible. Plus they'd probably want to be gliding across a lettuce leaf rather than my nose, anyway.

Instead, snail farmers harvest the gooey mucus and companies package it and sell it on the internet as a restorative snail face cream. I gladly bought a jar of MIZON snail repair cream with 92% snail mucous extract and swapped it out for my usual nightly application of Clinique Repairware Laser Focus.

Day 1: Not What I Expected

My snail mail (sorry, couldn't help it) arrived and I ran upstairs to wash my face and try it. I was expecting it to look like something that was mostly from a mollusk (slightly green, maybe?), but instead it looked like any other tub of white skin cream.

I woke up with my right eye completely crusted over and oozing gross yellow gunk.

The snail cream didn't smell funky, either. It didn't really smell at all. All I could detect was a vague whiff of that slightly plastic scent that you get from Elmer's glue. The familiarity of the cream was both reassuring and disappointing. So much for some zany snail cream selfies.

Day 2 Is This Stuff Safe?

I woke up with my right eye completely crusted over and oozing gross yellow gunk. This isn't even the worst photo. This was what I sent my partner in the afternoon to prove that my eye looked better than it did that morning, when he rolled towards me and screamed.

Ingredient-wise, snail cream seemed like a better product than what I usually get from Sephora.

My first though was that I was having a bad reaction to the snail cream. I hurried to the doctor. Even though he raised his eyebrows at me when I told him I had smeared snail slime all over my face the night before, he assured me that the problem wasn't the snails — it was my kids. They had given me a gross case of pinkeye they'd had themselves the week before. Ah, the joys of parenthood. Armed with eyedrops, I headed back home to continue the experiment.

Even though I knew my ghastly looking eye wasn't from the cream, I decided to take a closer look at what I was putting on my face every night. The cream promised to combat aging, fine wrinkles, blemishes and acne scars. It also said it created "elastic, bouncy, bright, and healthy skin." That's great and all, but was it safe? Then I saw it was rated as safe to use on sensitive skin and didn't have any fragrances , parabens, or colors. I have really sensitive skin, and many of the leading face creams have fragrances added to them, which cause me to break out and get a rash. Ingredient-wise, snail cream looked like a better product than what I usually get from Sephora.

Turns out, snail cream is a pretty decent daily moisturizer.

I noticed there was a bar code with March 2018 on the bottom of the box the cream came in. I'm assuming this is an expiration date. It made sense that something with so much organic material in it wouldn't last forever, but this makes me a bit wary of buying snail cream again in the future. I get bored with products easily and like to switch things up, so I tend to hang on to makeup and skin cream for years on end. I still have eyeshadows from the last decade in rotation. If you're going to try snail cream, know that the jar is a generous size, so be prepared to use it straight through until it's empty or know that you might end up tossing some once it's expired.

I woke up this morning with two painful whiteheads at the base of each nostril. I wasn't surprised to see them — I've been sick, so I'm blowing my nose a lot. I've also been taking lots of walks in the sun while coated in sunscreen, so it makes sense that the pores around my nose are rioting. But even though I know why I have the zits doesn't mean I'm happy to see them. I debate going back to my tried and true face cream in order to deal with them quickly, but since snail cream is supposed to be good for acne, I stick it out and reach for the tub o' mucus.

After seeing what it did to my whiteheads, I'm starting to come around to the snail cream.

I try putting makeup on over the snail cream for the first time today. While I'm still not loving my zits, I'm happy to report the snail slime didn't make my primer or foundation clumpy like I'd feared. Turns out, snail cream is a pretty decent daily moisturizer.

I woke up this morning and was thrilled to find out my zits had packed their bags and left while I was sleeping. Usually it takes 3-4 days for a zit to heal on my face, but these were gone just like that.

Honestly, up until this point I wasn't sure I was loving the snail cream all that much. It felt lighter than my usual creams, like it was sitting on top of the skin rather than sinking in. And even though I sometimes felt a slight tingle on my cheeks a few minutes after putting it on, I wasn't getting any other signs that it was doing anything. But after seeing what it did to my whiteheads, I'm starting to come around to the snail cream.

Since I was so happy with the way my experiment was going, I decided to be bold and use the snail cream as a total body moisturizer. After all, if it could do great things for my face, maybe it could also be great at plumping up my post- pregnancy boobs.

After a shower, I applied a thin layer all over my arms and torso. I regretted it immediately. Snail cream is just a little bit tacky when it dries. While this isn't a dealbreaker for my face, it made my body feel like it was covered in glue. I got halfway into bed and realized I was already sticking to the sheets. I really didn't want to have to peel myself away from my partner's embrace after he fell asleep, or worse, get stuck to my quilt. Another shower fixed everything, but I learned that snail cream is most definitely for faces only.

This morning, I took a makeup-free selfie, just like I did on day one. Going into this experiment, I thought that trying snail cream would be fun, but I really didn't think snail cream was going to do much for my complexion. Instead I was excited by how much of a difference I saw in my skin after a week of daily snail cream application.

I spent a lot of time in the sun this week, but my face didn't feel dry or "baked" the way it usually would. My skin's clearer than usual too, and it looks less dull and more even. At $15 bucks a jar, snail cream is way more affordable than most of the face creams out there on the market. I think it works just as well, if not better as my fancy stuff.

I know it's unconventional, but I'm sold on using snail slime cream on my face. And I'm a little giddy looking forward to the day when someone compliments my complexion, just so I can see the look on their face when I say, "Thanks, it's snail slime."

More Like This
Bright & Festive Nails To Rock On July 4th
Meet Your New Favorite Blazer(s)
Considering Getting A Tattoo While Pregnant? Here’s What To Know
30 Kitchen Mistakes You’re Probably Making (& How To Fix Them)