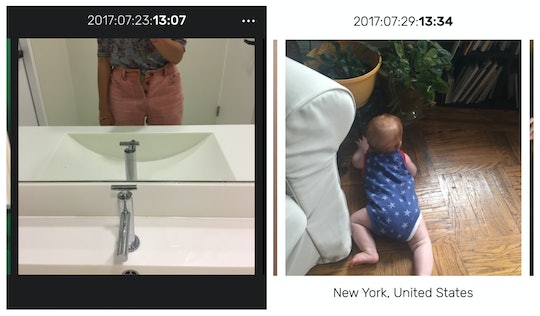 My favorite debate among moms this year has been what "real" motherhood looks like. Is real motherhood a diaper explosion in the ladies' lounge at Macy's, or is it holding your baby up to the sky as the sun flares behind you — this is roughly the debate. I love it because when a mom is having a twilight picnic out in the desert with her toddler, dressed head-to-toe in muslin, it is beyond discussion whether or not this is a "real" representation of motherhood. She might be having conflicted or complex feelings beneath her Panama hat, but she is a prop, her child is a prop, her high-waisted pants and the furry, Seussian Joshua trees behind her are props. It is a scene as real as a breastfeeding mother leaping in slow-motion on the moon. But it is an image we feel compelled to post to social. How do we reconcile the need to be ~real~ with the urge to curate an Insta-grid of our bestlife? Enter an app called Minutiae, the "anti-social media" app.

The app has no social component. Once a day, at an unspecified time, you will get an alert to take a photo — and only 30 seconds to do so. Enough time to pick up your phone, point it in the most interesting direction available, and snap. The photo is shared with strangers around the world, and for just a minute, you can look through the photos other people are taking. There are no likes. Just crudely captured stills. Like this.

My kids were 9 months old and 2-and-a-bit when I tried using Minutiae. And really, what better ages than those to challenge a mom to not stage all her photos? Even if I wanted to set up something aesthetically pleasing, I needed longer than 30 second to hustle my kids into the frame. Minutiae doesn't give you that long. Which is how I landed gems like this:

The blurry lo-fi camera work, the feet over head, the implied movement through a possibly treacherous toddler nappy change, the child looking directly at the camera/through the fourth wall, challenging me to admit that the universe is running the show and all I can do is photograph it via a rushed iPhone pic with spare hand — a true testament to parenting in the early years.

Next, I appear to be shadowing my younger child as he makes his way toward the vulnerable house plants in our living room, possibly intent on eating dirt, stripping them of their leaves, or knocking the pots over in his attempt to stand upright on bendy, green, underdeveloped baby legs — all likely outcomes of this moment, which has long since slipped from my memory.

Note that, typical of a mom on her second child, I am doing nothing to intervene. Just watching to see what will happen, an inert bystander.

In the newborn, I took a million selfies of me and my son, though I never posted them — I don't like posting my own face. The grams I put up were classics of toddler gazing at baby, baby with blurry twinkly Christmas tree behind, et cetera. In my defense, I probably had a while to take the shot — this little grommet used to nurse for HOURS.

Here's another attempt at capturing my authentic life, note the staged greeting of baby by his older sibling — I guarantee producers on The Bachelor are not better at orchestrating an on-camera meet-cute.

I had of course returned to work at the point I was subjecting my life to the narrow lens of Minutiae, and was already on my second job, having hopped to a youthful tech company (read: more money) where people dressed to play up their mid-thighs with a range of jorts, short shorts, and male rompers.

Looking at this snap of a tech bro in the freight elevator, I could not have wished I was home with my kids any harder. The door seems to be closing on something metaphorically important, doesn't it? (Work-life balance? Sense of self? Dignity?)

Those canvas shoes and no socks: kill me.

The below is, of all the photos I captured, the closest to a photo I would have taken of my own volition — though not necessarily one I would have shared. I have quite a few one-armed photos of my babies sleeping soundly on me after nursing, their lips still puckered toward the boob I de-suctioned them from. This, this is the stuff we wish we could hold onto.

Do you remember how much time you spent looking into the pinwheel of your baby's ear? I had completely forgotten.

My experiment with Minutiae ended when I turned off notifications (I kept missing them anyway) to save battery power on my crappy iPhone. It is still floating around the App Store, making no noise, unlike the rest of the creations out there which are each louder, brighter, and more gamified than the last.

Of all the photos taken by other people I viewed as an anonymous member of Minutae, I did not see another single photo of a child. It makes sense; the early adopters were always going to be young tech-types still moving through life with the quality of their workspace cold-brew the issue of gravest importance. In my own, I see life rushing by, babies who have already disappeared into the form of larger children. We spend all our times trying to capture the big moments, but looking back, it's the minutiae you miss the most.

All photos courtesy of the author.