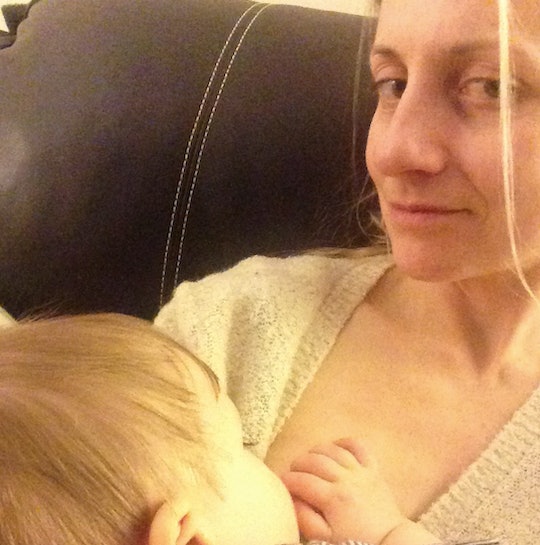 I Want A Boob Job, But I'm Worried About What It'll Say To My Sons

For most of my life, I’ve worn a 34 A-sized bra. And for most of my life, it never bothered me. Having “itty bitty boobs” didn’t stop me from getting a date in my teens and 20s. Plus, I loved the freedom of occasionally going braless and not complaining of back pain. The benefits extended to my athletic life, too: I ran cross-country all throughout high school and I never gave much thought to sports bras because they’re all pretty much the same when there isn’t much to support. But then, in July of 2012, I became a mom for the first time. After two days of nursing a newborn son, my 34 A cups blossomed into perfect, perky C cups overnight, spilling out of halter dresses whenever I put them on. Because I was breastfeeding and working out, I lost my baby weight fairly fast, but my boobs stayed huge, and I loved that. My husband took notice, as did many of my friends. One of my friends commented on a picture of me on social media and wrote, “digging the post-pregger boobs.” Hearing things like this made me feel validated, like I’d achieved the pinnacle of womanliness — especially during a time in my life when I felt super-unsexy and was changing diapers and wandering around the house in leggings. I finally felt like I knew what I’d been missing out on all these years.

All of this positive validation was great, but it came with a steep price: My feelings of sexiness and self-worth were so tied up in how my breasts looked during my postpartum period that I didn’t realize losing my full breasts would make me want a boob job once my breastfeeding days ended. In the meantime, motherhood continued, and after 11 months, I got pregnant with my second child while still breastfeeding my first son. My boobs stayed pretty supple, and I was so busy managing two little ones that I didn’t have much time to focus on my appearance. But when I finally finished breastfeeding my two children for good this past August, my once ample breasts turned inward and shrunk back to their pre-pregnancy size within weeks of weaning. Unfortunately, it didn’t stop there.

Weeks later, none of my 34 A bras fit snuggly anymore, and I had to suck it up and buy a bra that was even smaller than the one I had when I was only 12. As I shopped for a few unmentionably smaller sizes, feeling defeated, I simultaneously Googled “breast augmentation.” Though I never intended to ever have big boobs, once I got them, they started to feel like home. Like they were always supposed to be there. I bought clothes to accommodate them. I pushed them up in sexy lingerie and halter tops. And once they weren’t there, I felt empty and child-like. I felt like I had regressed developmentally. Armed with two kids, and the sudden awareness that middle age was just around the corner, I felt like I needed as much physical affirmation as possible. So I made a plan to explore a boob job to truly figure out if implants could fix some of these feelings.

Here falls my dilemma: in addition to wanting to be a sexy woman, I also want to be a good mother.

Recent data from American Society of Plastic Surgeons (ASPS) shows breast lift procedures have grown by 70 percent since 2000, and largely among women ages 30 to 54. Breast implants have grown, too, but at a slower pace, according to the data. Dr. Daniel Maman of 740 Park Plastic Surgery in New York told Romper that breast augmentations — which include breast implants and/or breast lifts — are “very common” among new moms because breasts tend to deflate after childbearing and breastfeeding. According to Dr. Maman, the number of patients who’ve opted for post-baby breast augmentations has gone up in his office, but he credits this, in part, to the growth of sophisticated 3D modeling technology, which helps patients see what they will look like post-op.

The way Dr. Maman describes a boob job makes it sound so easy, like taking a barre class or getting a massage. I know, too, that implants are removable, and that you can still have mammograms if you have breast implants, but here falls my dilemma: in addition to wanting to be a sexy woman, I also want to be a good mother.

I wondered how I’d be be able to teach and model body acceptance to my sons if I couldn’t even accept my small breasts. And the thought of getting implants and a boob lift — or both — made me feel like I was sending them a message that positive self-love and acceptance are less desirable than a quick fix.

The pros to getting implants — sexy curves, a boost in my confidence — were obvious. Then there were the cons. First, I’d have to pay something like $10,000 for the plastic surgery. I’d also need to scale back holding my toddlers as I recovered, because after a breast augmentation, you can’t do any heavy lifting for six weeks. Third, because I’m an open person, I’d want to tell my sons what I did when they got old enough to understand, but what if they judged me, or worse, they looked down on me? I wondered how I’d be be able to teach and model body acceptance to my sons if I couldn’t even accept my small breasts. And the thought of getting implants and a boob lift — or both — made me feel like I was sending them a message that positive self-love and acceptance are less desirable than a quick fix.

There’s also the issue of risk. Even though the risks associated with complications during breast-augmentation surgery are increasingly lower, they’re not at zero. Figures and studies vary, but according to one scientific study of 271 women who got breast implants, 10 percent experienced ruptures within the first two years (though the likelihood of rupture decreased the longer the implants remained intact). Other complications include changes in nipple sensation and scar tissue forming around the implant, known as Capsular contracture.

I know spending money on a vanity procedure — one I don’t need — is selfish. The average cost of one or more breast-augmentation procedures is $3,200 to $3,700, according to data from the American Society for Aesthetic Plastic Surgery. (Though it’s worth noting that these estimates don’t include medical tests, prescriptions, other surgery-related costs, anesthesia, and other specific pre- or post-augmentation procedures.) That kind of money could go toward my sons’ college funds. I realize even considering this procedure is a luxury and privilege, but knowing that the money on an otherwise “useless” surgery could be incredibly useful in case we have an unexpected emergency has made my decision all the more difficult.

Right now, I’ve opted to shelve the decision because I’m totally divided. I know having above-average boobs is great, but I’m still stuck on my feminist ideals of body acceptance. There's nothing wrong with the way I look now, but there's also nothing wrong with wanting to look like a better, happier version of myself. I haven’t ruled out a boob job completely, but I’ve decided to wait a little longer — at least another six months — to see if I can accept my “new” former body, slightly smaller than the original.

And as I work to rebuild my confidence in my post-baby appearance, I’ve settled on a temporary fix. I have a Pinterest board filled with photos of celebrities with small breasts like Kate Hudson, Keira Knightley, and Gwen Stefani. They inspire me with their maternal beauty and confidence. Of course, seeing sexy celebrities with full busts also sends my thinking in the other direction — especially now that social media has put such a huge emphasis on appearances — so I make a concerted effort to stay on top of my Pins. Seeing so many empowered, flat-chested women helps me to feel less alone, and in a way, reminds me that my breasts don’t define my sexiness or my femininity.

More than anything, getting a boob job isn’t as easy as getting a tattoo. One friend of mine who got implants told me she didn’t really feel like herself for at least four weeks afterward. Time like that, especially right now, is precious in our family. I want to spend as much of it as possible with the 2 and 3 year olds who’ve made me a mom, C-cup or not.