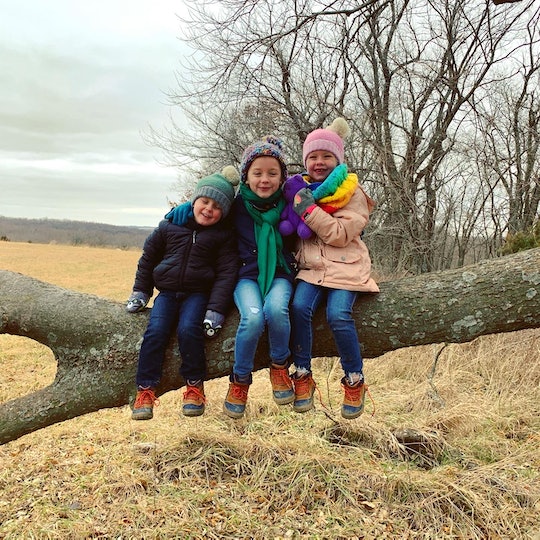 I Wanted Four Children, But I Could Only Handle Three

“Will you have more kids?” It’s the question first-time parents may be asked more than any other. Usually, it’s followed up with “How many more?” “Do you hope you get a boy this time?” “How will you space them?” If you’ve been there, you can probably fill in the rest of these conversations which, depending on your situation, your current mood, and who’s asking, can range from exciting opportunities to talk about your life, to hurtful and intrusive. When my husband and I were new parents, these questions dominated our own conversations as well as the ones we seemed to be endlessly having with our parents. There were a lot of factors to consider: we were poor, I came from a big family, he came from a small one. We both idealized shows like Parenthood and Brothers and Sisters that tell the story of large, dramatic families full of siblings. My first pregnancy had been rough and so was the newborn stage, and frankly, I wasn’t sure how many more years I could go without showering. But I still wanted four kids. It was the magic number. The Parenthood, Brothers and Sisters, big, chaotic, happy family number.

More Like This
Is The Tooth Fairy Real?
My Best Mom Friend Is A Dad
My Mom Friends Saved Me From The Hole Of Postpartum Despair
An Ode To The Mom Friends Who Aren't Moms

People told me it was hard, but I thought they were referring to potty training and saving up for my children’s college funds.

So, four became our goal. We had another baby and another. All told, we were the parents of two girls and a boy — we only needed to have one more to achieve our ideal amount. But by the time our third child was born, our oldest was 4-years-old, and my experience as a mother had shifted from fantasy to an all-consuming reality. I no longer dreamed of long hours spent playing dolls and baking cookies with cherubic toddlers beside me. Instead, I spent my time tearing them off one another, holding their thrashing bodies in a vice grip as I changed their diapers, and blinking back tears as I swept up the shards of precious family heirlooms that I had naively assumed were placed out of my 2-year-old’s ever-ambitious reach.

Nothing about motherhood was how I imagined it would be. People told me it was hard, but I thought they were referring to potty training and saving up for my children’s college funds. I didn’t realize that the real challenge would be the immersive nature of motherhood. Sleepless nights spent worrying about everything from that bully at school they insist on calling their best friend, to the consistency of their stool. And the even darker concerns, like, just how badly am I traumatizing them? I thought I would be composing Lin-Manuel Miranda-quality wake-up songs to get everyone’s days off to a happy, healthy start, and instead, most mornings I spent the ride to school apologizing for the emotional meltdown I had while attempting to shove their feet into their shoes.

I really wanted four kids, but as a mother of three, I recognize that I am neither the mother I thought I would be nor the one I wanted to be. There are a lot of factors at play — my temperament, my own childhood experiences, the children themselves, the pregnancies — but mostly motherhood is no longer theoretical. The hard reality is that I reached, maybe even went beyond, my level of competency as a parent with baby number three, and I can’t handle a fourth child.

I’m not saying that I am a terrible mother, only that I am not the mother I imagined I would be. My ideal self was a warm sweetheart who oozed crafts, kisses, and life-changing pep-talks. But it took the reality of motherhood for me to realize that I was more of a temperamental introvert with a dark sense of humor and an avoidant attachment style. I can’t have my parenthood fantasy because I can’t manage "big and chaotic" at the same time as maintaining a sense of "happy."

And so we stopped at three. There is a part of me that will always want four, but I don’t grieve the loss of that fantasy, because the family I do have is better than any TV show. I have three beautiful children who challenge me to be the best version of myself every day. Being a mother is hard work, and growing is hard work. For me, the miracle of parenthood is the way those two things go hand in hand. And that’s not a dream, it’s real.