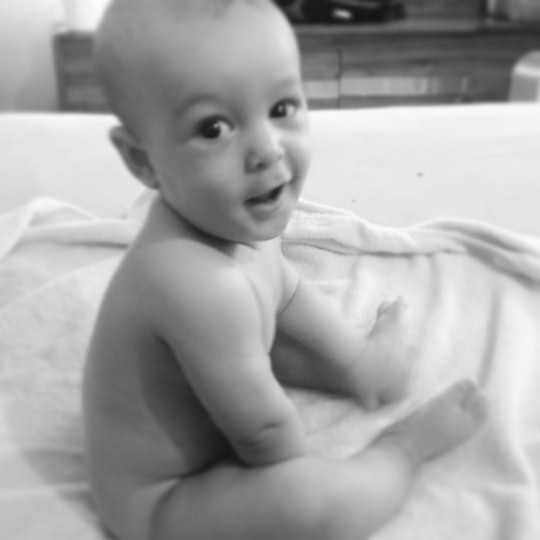 No, I Didn't Circumcise My Son. Here's Why.

Before I became a mom, whenever I thought about circumcision, I always thought about that Sex and the City episode where Charlotte dates the guy who isn’t circumcised. She's really weirded out by it, so she basically bullies the guy into getting circumcised, even though he's well into his thirties. He agrees, and right after he undergoes the procedure, he dumps her, so he can go sleep with other women. Now that he has a cut penis, he says, he wants to share it with the world.

Once, after I watched this episode, I realized that I had never seen an uncut penis before. So my friend and I searched for "uncircumcised penis" on Google Images. We were confused and a little grossed out by all of the pictures. “It’s like a hot dog wearing a turtleneck!” I exclaimed. I vowed that I wasn’t going to let one of those creepy-looking penises anywhere near me ever, and that if I ever had a son, he would absolutely be circumcised.

Then I had a son, and everything changed. I decided against circumcising him, and I don't regret my decision one bit.

When my son was born, the hospital I gave birth at in California didn’t do circumcisions. Then I found out that even if they did, our state-funded insurance wouldn’t cover it, since circumcision isn’t considered a medically necessary procedure. (Some insurance plans, however, do cover it.) When I asked a nurse about it, she said that we would have to talk to the pediatrician at our clinic about circumcising my son during his one-week check-up.

At my son’s check-up, I asked the pediatrician about circumcision. I wanted to get it done as soon as possible, so it wouldn’t bother him and he would be totally oblivious to the healing process.

“I really wish you would reconsider," she told me gently.

“It’s a cosmetic surgery," the doctor said. "It isn’t medically necessary, so there’s really no point."

“It’s a cosmetic surgery," she said. "It isn’t medically necessary, so there’s really no point. But if you want the information, I’ll let the nurse know to give it to you with your other paperwork.”

Even after the doctor told me I didn't have to circumcise my son, I still wanted to do it — that is, until I found out the cost of the procedure. Because a private company would be performing the circumcision, it was going to cost $250 if we wanted it done in the next few months. At the time, we could barely afford to pay for a box of diapers, let alone $250 for something that wasn’t medically necessary.

Still, my son's father was clear that he really wanted him to be circumcised. So I asked my mother to lend me the money for the procedure.

At this point, I was starting to have second thoughts. I began to do some research and realized that my son's doctor was probably right. The Centers for Disease Control (CDC) and American Academy of Pediatrics (AAP) have both said that while the potential benefits of circumcision, including preventing STIs and urinary tract infections, might outweigh the risks, it's still completely up to the parent whether or not they want to opt for the procedure. Nothing that I read convinced me that circumcising my child was absolutely necessary, so after consulting with another doctor, who told me the decision was entirely up to me, I decided not to circumcise him.

When I told other people my son wasn't circumcised, I was surprised by how shocked they were.

From there, everyone close to me became an expert on how to take care of him. “You have to be extra thorough cleaning him, or else he’ll get an infection.” my mother warned me, as if I hadn’t been changing the kid’s diaper and giving him baths for months.

When I told other people my son wasn't circumcised, I was surprised by how shocked they were. I knew that people had strong feelings about circumcision, but I had no idea other mothers judged those who chose to leave their kids uncircumcised so harshly. Still, when my friends talked about the problems they had as a result of their boys being circumcised (like my one friend whose son had to have additional surgery after her son had a penile adhesion, a common post-circumcision complication), I was so thankful that I had decided against it.

Now that my son is older, I've discovered that many parents choose not to circumcise their boys. In fact, the percentage of boys who are circumcised in U.S. hospitals has been steadily decreasing since 2002. While I felt like a bit of an outsider when my son was first born, I'm now a member of a group for moms of intact boys, and I know that opting out of circumcision is more common than most people realize.

My son is almost 4 years old, and we have yet to experience any sort of medical problems like UTIs or infections. Sometimes I worry that he spends a good portion of his time playing with his foreskin, but for the most part not circumcising him has been beneficial, especially now that we're potty training; the way the skin retracts when he has to go to the bathroom lets me know that he may be lying when he says he doesn’t have to pee pee, and I can get him to a toilet before he pees on my floor.

Despite my previous reservations about not circumcising my son, it’s funny how his penis has become so normal to me. Now, when I see circumcised penises, they look weird, just as uncircumcised penises looked weird to me before I became a mom.

When my son is older, if he wants to have a circumcision, I will of course support his decision. But I hope that by then, the societal acceptance of uncircumcised boys and men has changed. Of course, mine was a totally personal decision, and every parent has to do what's right for them, but I am so glad that I decided against circumcision; my little guy is fine, foreskin or no foreskin.