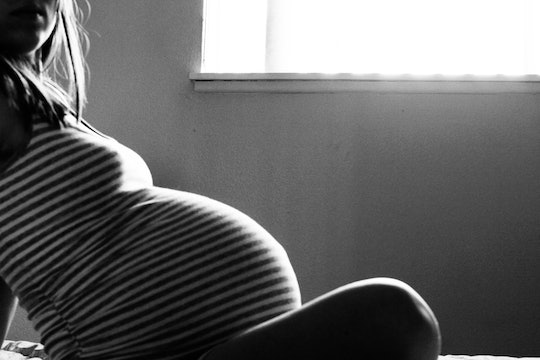 I Wanted A "Natural" Birth, Then I Changed My Mind

When my first son was born, I had envisioned having a “natural birth.” I read a lot of unmedicated birthing stories and watched the documentary The Business Of Being Born about the medicalized birth industry with great disgust. I knew exactly what kind of birth experience I wanted, and I had no fear that I wouldn’t be able to handle it. Yet when the time came to give birth to my son, the unmedicated birth I wanted was far from what I got — and truth be told, I feel OK about that.

When I went to the hospital thinking that I was in labor, they admitted me, even though I was clearly way too happy and pleasant to be in hard labor. Then when I didn’t progress overnight, they decided to break my water and induce labor, rather than admit their mistake and allow me to go home. I required lots of interventions, from Pitocin (the drug used to induce uterine contractions and speed up labor) to an epidural to a vacuum suction and an episiotomy that I did not consent to having. Nothing was explained to me, and it felt like I had no say in how I gave birth. It was an absolute nightmare.

So when my second son was born, I wanted an unmedicated birth more than ever. I wanted the polar opposite of my first birth experience, which left me with intense insecurities about my ability to birth, as well as a nasty yearlong struggle with postpartum depression. I worked through my feelings about my first birth experience by writing about it and talking through it with my partner, but I still wanted to know what childbirth was like without drugs. I felt like I had been robbed of the experience I wanted the first time around, and I thought having an unmedicated birth would set things right.

When I was pregnant with my second son, I felt confident in my body’s ability to give birth. I reminded myself over and over again that women had been doing this for thousands of years. I was made for this. Success was in my DNA. I switched from an OB-GYN to a midwife to ensure I would have the support I needed in the delivery room. In fact, I found a group of midwife providers who worked together, so I knew if my midwife wasn't there for whatever reason, another woman whom I had bonded with would be by my side, coaching me through the process.

There was a part of me that was thrilled by the thought of getting to experience the pain of childbirth for the first time.

I talked to lots of other moms who had unmedicated births, soaking in their stories and strength. Although their stories often sounded daunting, they assured me it could be done. I practiced yogic breathing and learned different techniques for riding out the contractions. I realized I had never even felt real contractions, because all of mine had been either Braxton Hicks contractions, or so-called "practice" contractions, or they had been contractions aided by Pitocin, which were a whole different ballgame.

There was a part of me that was thrilled by the thought of getting to experience the pain of childbirth for the first time. I had experienced some of it with my first son: in fact, my epidural wore off while I was pushing, so I felt the worst possible part after 21 hours of exhaustion and agony. But the pain didn’t scare me. I wanted the polar opposite of my first childbirth experience, and in the end that's what I got - until it came time to push.

This time, I stayed home and made sure I was in labor before going to the hospital. When I started having contractions, part of me was a little worried I might just have diarrhea (I mean, I did try to eat jalapeno poppers to put myself into labor), but I was 90% sure it was baby time. I was right: When I arrived at the hospital I was already at 6cm, and well on my way.

My midwife gave me exactly the kind of birthing experience I wanted. She was with me constantly. She let me labor in the bathtub and switch positions as often as I wanted. She coached me gently through each contraction, even when I thought the pain was too much. Then, as I hit 9cm and was minutes away from pushing, I changed my mind. I was tired and the pain was so incredibly intense. I wanted a break, and so I chose an epidural.

When it came time to push, I felt ready. Before the epidural, I hadn't felt ready at all.

My midwife was uncertain, but my head was clear and I felt confident in my choice. So she continued to support me as I switched to a medicated birth in the 11th hour, right before it was time to push. The anesthesiologist wasn't sure I would have time for the epidural, but he did it just in the nick of time. Relief immediately washed over me and I spent the next half hour resting, so when it came time to push, I felt ready. Before the epidural, I hadn't felt ready at all.

Although I sometimes feel wistful about not having the opportunity to experience a fully unmedicated birth, I’m sure I would make the same decision again. I was able to catch my breath and go into pushing and birthing my baby in the way that felt right to me. It might not have been the birth I envisioned, but it was definitely the birth I wanted. Most importantly, it was my choice from start to finish, and that is what truly made it so much better than my first.