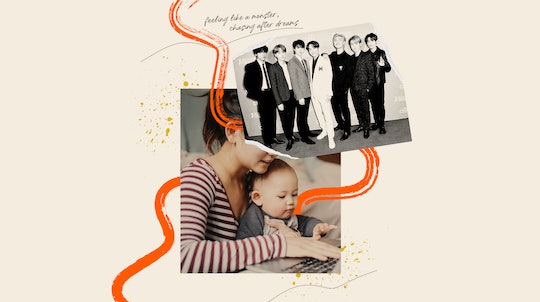 I Was A SAHM, Then The K-Pop Boy Band BTS Gave Me A Career

Two years ago, a shiny K-pop boy band with scathing hip-hop bangers and vulnerable pop songs helped me save myself. On the brink of 40, I was married with four children, living the suburban bilingual homeschooling stay-at-home dream I thought I wanted. And yet, I was ready to burn it all down and walk away from the people I love most in the world. Then along came BTS.

If you’re unfamiliar with BTS, the septet, consisting of RM, Jin, SUGA, j-hope, Jimin, V, and Jungkook, sold the second most albums worldwide in 2018, has been featured on Time’s 100 most influential people list, and won best group at the 26th Billboard Awards. They have topped 5 billion streams on Spotify — the first Asian act to do so. They are, in other words, superstars. But their influence goes beyond their huge catalog of songs — their YouTube series showed them making friendship bracelets and painting in silence for 45 minutes. Their name translates roughly as “Bulletproof Boy Scouts” (to protect their fans and generation from the bullets society slings at them) and it is BTS’s genuine love for each other and their fans that captures so many of us. With BTS, there is always hope.

Growing up Taiwanese in a white America, I could never have envisioned seeing Asians — let alone Asian Americans — on television or winning major music awards. My imagination simply was not robust enough. When I pictured my future, I could only fill in what I knew: a doctor, lawyer, or a vague business person. While I had always wanted to write — and be famous — I never thought it was for me because of who I was, in the time that I existed, in the country in which I resided.

I discovered BTS when searching for Mandarin pop songs to trick my children into watching more Chinese media.

I spent the better part of four decades ignoring what I wanted emotionally and physically. Call it a talent or an unfortunate side effect of growing up Asian American and Christian. By the time I finally started listening to my feelings and desires and taking tentative steps to fulfilling them, I was overcome with fury and despair.

Who did I think I was? I was too old, too Asian, too mommish to chase celebrity. Every successive child I had added an extra three to five years to the mental timeline of when I could conceivably pursue my writing dreams. I should have been content in my minivan and frumpy sweats, resigned to shaping the lives of my children instead of living my own. Instead, I lamented, “I could have been a lot of things.”

Even when my writing career started taking off, it still wasn’t enough.

I discovered BTS when searching for Mandarin pop songs to trick my children into watching more Chinese media. One YouTube video led to another and though all I wanted was to learn their names, here we are, at least $6,000 invested and more than two years later.

The messages in BTS songs spoke directly to what I grappled with: struggling with your identity, feeling like a monster, chasing after dreams, fear that your real self is unlovable, and finally, self-love and acceptance. In their lyrics, interviews, and documentaries, BTS consistently discussed their fears, whether of failure in their early years or the loneliness and terror of success, of losing their passion for music, and of getting what they wanted and it not quite being what they expected. Still they raced ever forward.

Look. I’m not stupid. At 41, I have experienced firsthand the rise and fall of many a boy band in my day; I know this phenomenon is temporary and fleeting. The world is full of talented, fun, and attractive humans, and BTS seem nothing special in that sense. Except they are.

I have seen BTS be vulnerable and excellent. I saw them transform their pain into art, kindness, and inclusivity. I have identified with their fears of failure, success, and loss. I have devoured everything they put out, praying it would infuse me with courage in a sort of BTS eucharist.

I have dared hope that if seven kids from a broke Korean entertainment company could transform into a global phenomenon, that perhaps a middle-aged Asian American mom could become a famous writer and influencer. (A face like mine shouldn’t be wasted, you know?)

I slowly stopped hiding. I bent my career towards the goal of interviewing BTS in person one day. Despite feeling ill-qualified, I got a job as an entertainment editor and came second in a pitch competition for women-run businesses. I wrote pop-culture commentary articles about BTS, started a BTS related podcast, and became a BTS YouTube reactor. I even converted my kids into huge BTS fans. My husband, though ambivalent about BTS, doesn't mind too terribly because he gets spillover benefits — and by that, I mean sex. He gets a lot more sex. Oh, and I am actually making money from all this — not just writing about BTS, but as a freelance writer — even covering my mortgage for about two years.

Could I have made it without BTS? Sure. I’m a tenacious sort of person and survived my abusive childhood and its aftermath for decades without them. But in my moment of need, their art and existence bestowed me with the nerve to liberate myself. For that gift, I will always stan BTS.

More Like This
35 Relatable Quotes That Prove Being A Mom Isn’t Easy
Ginger Zee Had A Perfect Response After A Troll Asked Her "Who's Raising Your Kids?"
It's A Beautiful Day In Jenny Slate’s Neighborhood
The Euphoric Terror Of Rollerskating Was Exactly What I Needed