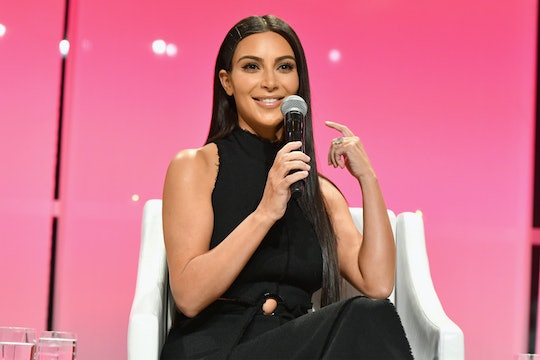 I Was A Surrogate, & Here's What You Need To Know About What Kim K Just Went Through

On Wednesday, multiple news outlets reported that Kim Kardashian West and husband Kanye West have decided to have a third child via surrogate, due to Kardashian West's medical issues during her last pregnancy. Kardashian West suffered from placenta accreta, a condition where the placenta embeds itself into the walls of the uterus.

Reactions to Kardashian West's revelation that she plans to use a surrogate ranged from positive to incredibly judgmental. Many people accused her of only using a surrogate because she wants to preserve her figure, or for other self-centered reasons. And while I understand that the Kardashians are branded as shallow, self-absorbed divas, as a former surrogate, I understand what Kim Kardashian West is going through.

Choosing to have someone else carry your baby is an incredibly difficult and personal decision — not to mention an expensive one. According to West Coast Surrogacy, it can cost anywhere between $90,000 to $130,000 to hire a surrogate, an estimate that includes the cost of prenatal care and labor and delivery fees.

So before you judge Kim Kardashian West — or any woman, really — for using a surrogate, here are a few things you need to know about it.

Crystal Henry in labor when she was a surrogate.

1) Choosing a surrogate can be as difficult as choosing a spouse.

For celebrities and mere mortals alike, choosing a surrogate is incredibly difficult. That's understandable, considering the sheer magnitude of the role: you're literally choosing another human being to care for your child in their most fragile and delicate state. Choosing a surrogate can be even harder than choosing a spouse because in the former case, if the match isn't right you can always get a divorce. But if the match goes south during a pregnancy, there's no easy way to split. There's literally a human life at stake.

If people found out that the pregnant lady in line at Target was toting around Kim Kardashian West's baby, that's an added risk to the surrogate — and to the baby.

Both parties need to be able to completely trust each other. When I decided to become a surrogate, I had to undergo extensive counseling with the couple I carried for before we even began to build that trust. I had to fill out paperwork detailing my finances, mental health history, and family life before I was even approved to carry another couple's child.

For celebrities, that mutual trust is on a whole other level. Kardashian West probably had to work hard to find a woman she not only trusted to carry her child, but also to be discreet enough to not reveal whose baby she was carrying. (If people found out that the pregnant lady in line at Target was toting around Kim Kardashian West's baby, that's an added risk to the surrogate — and to the baby.)

There's been plenty of speculation about Kim's finances, and I don't know if she's rolling in royalties from her show or if she's neck-deep in debt. But I can tell you that surrogacy is incredibly expensive. Families who use a surrogate usually plan to spend at least $100,000, including a flat fee for the agency and the surrogate herself. In most cases, the surrogate is paid a monthly stipend. While some people think it's ridiculous that surrogates get compensated so much, even the surrogates I know who carried for close friends or family members had some sort of compensation for their time and efforts. After all, I doubt anyone would sign up to babysit someone's child for almost a full year for free.

Even for celebrities like Kim Kardashian West, the cost of surrogacy isn't something to be taken lightly.

Surrogate compensation is only a small slice of the pie. The family also has to cover the costs of IVF, which can cost up to $12,000, prenatal care (including the delivery and hospital stay), insurance for the surrogate, and legal fees. It adds up to a nice chunk of change. Kim could give birth to her own kid and buy a brand new Escalade for the price she'll pay for someone else to do it.

The family I carried for wasn't rich by any means. They live in a modest home and drive modest vehicles. They were regular people who had to save up enough money to add a child to their family. It just goes to show you that even for people like Kardashian West, the cost of surrogacy isn't something to be taken lightly.

3) Surrogacy isn't guaranteed to be successful.

Crystal Henry with her first child.

People don't usually turn to surrogacy because it guarantees them a baby. They turn to it because most of the time, it's their last hope. Usually they've already tried fertility treatments or applied for adoption (which can be just as expensive as surrogacy). In my case, the woman I carried a child for had to undergo three rounds of painful egg retrievals to get 10 eggs. Out of those 10, only one fertilized. Doctors transferred that one surviving embryo into my womb, but the baby stopped growing at seven weeks, and they had to turn to egg donation. All the money they spent on egg retrievals and IVF was completely gone.

There are no guarantees with surrogacy.

Assuming Kardashian West is using her own eggs, she'll have to hope that all the stars align for her baby to make it from fertilization to birth. Even something as small as the surrogate's uterine lining being too thin can be reason enough for the transfer to fail. Kim is literally putting all of her eggs in someone else's basket and hoping for the best. If she's not using her own eggs, or if they can't use Kanye's sperm, they'll have to turn to egg or sperm donation, which is just one more expensive hurdle to jump over.

There are no guarantees with surrogacy. The eggs, sperm, and embryos can all be pre-genetically tested and look fabulous, but sometimes they just don't result in a baby. The embryo I miscarried was tested and it looked like a textbook beauty. But for whatever reason, it never resulted in a live baby. Kim Kardashian West is signing up for that risk.

4) Placenta accreta is no f*cking joke

According to her blog, Kardashian West struggled with preeclampsia during her first pregnancy. That alone would be enough to scare women off giving birth again. But after her second pregnancy, Kim revealed that she was diagnosed with placenta accreta, which meant that her placenta wouldn't detach from her uterus. After she gave birth, her doctors told her that any future pregnancies she'd have would be high-risk.

Before anyone makes claims that Kim Kardashian West is just too lazy or vain to carry her own child, I think it's best to understand the lengths someone would go to in order to expand their family.

Placenta issues kill people. As a matter of fact, a placental abruption killed a surrogate from the tight-knit surrogate community. The news of her death was a sobering reminder to all of us that surrogacy isn't something any of us should take lightly. Say what you want about the Kardashians as a family, but I'd take pause before judging Kim for knowing her own limits when it comes to pregnancy.

5) Kim is missing out on the magic of pregnancy.

Crystal Henry with her first child while she was pregnant as a surrogate.

Pregnancy isn't a delightful, happy time for everyone. I personally loved it and thought it was magical, but even I couldn't escape the extreme fatigue, morning sickness, and backaches that come with it. Still, I don't think anyone would choose surrogacy purely out of convenience, as some people have speculated Kardashian West did. After all, Kim gave birth to her other two babies the old-fashioned way, so I doubt she's worried about getting stretch marks all of a sudden.

Kim Kardashian West knows she'll be missing those first few kicks and tumbles that are the first signs of a baby's life. She knows she won't have the joy of hearing her baby's heartbeat during the first ultrasound. Those joys will belong to another woman, and we should sympathize with Kardashian West for that, not judge her.

Kim Kardashian West might be a person who is famous for just being famous, but she is a person all the same. Before anyone makes claims that she's just too lazy or vain to carry her own child, I think it's best to understand the lengths someone would go to in order to expand their family. It's not a small decision, but believe me — for both the surrogate and the family she's carrying for, it's worth it.