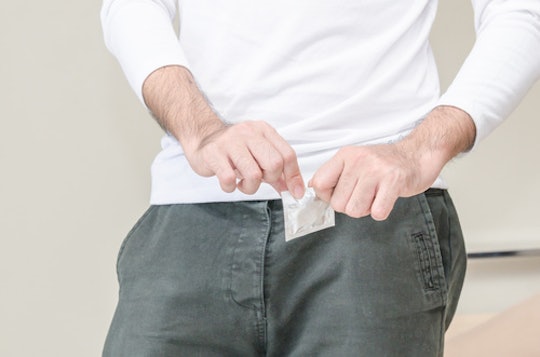 I Was A Victim Of Stealthing — Twice

The term “stealthing”," which describes the act of non-consensual condom removal during sex, has been making headlines recently after a paper in the Columbia Journal of Gender and Law went viral. In the paper, Yale Law School student Alexandra Brodsky documents a troubling online movement where men “teach” one another how to successfully remove a condom during sex without their partner’s knowledge or consent. The practice "is experienced by many as a grave violation of dignity and autonomy," Brodsky wrote.

Following the publication of Brodsky's paper, there's been an ongoing debate as to whether or not stealthing is legal, with some lawmakers taking steps to attempt to criminalize the disturbing “trend.” But even though stealthing has gained awareness lately, it’s something that women have experienced for years — it just didn’t necessarily have a name.

Romper spoke with Daisy (her name has been changed to protect identity), a 22-year-old woman who was the victim of stealthing – twice – before the specific term was coined. Her story highlights just how common stealthing is, as well as the psychological toll it takes on victims. Here is what she had to say about stealthing, and what advice she’d have for women with similar experiences, as told to Romper writer De Elizabeth.

I have been a victim of stealthing twice. To be honest, I didn't even know this behavior had a name until I read an article about it a few months ago. It was like a light went off in my head. Like, oh my God, that happened to me, and I'm not crazy for feeling upset about it. I'm not even sure if it's technically against the law.

The first time it happened, it was with my high school boyfriend, more than four years ago. It happened about halfway through our relationship and around the same time things started to get really bad. At the time, we were still trying to use condoms regularly, since I wasn't on birth control. However; he didn't like using condoms and he claimed he was allergic to latex, although he didn't like the non-latex kinds too. To this day, I'm not entirely sure if his condom allergy was true or not.

From what I remember of the incident, we were having sex and while changing positions, he removed the condom. To be honest, we were both drunk at the time. I wasn't too upset in the moment, as we were in a committed relationship, but it was the conversation afterwards that really bothered me. When he was finished, I said something along the lines of, "You could have asked before taking the condom off.” I remember him replying that I would have just said no, which I had done in the past. He's not a great person and, sadly, this is just another example of some of the sh*tty things he did.

I remember the second time more clearly, as it was just a few months ago. I was seeing a married man (I know, I know), and it was the first time we were having sex. He made a joke about how he had to stop at a drugstore on the way to our date, so he could buy condoms. Halfway through having sex, he pulled the condom off and started acting more aggressive and choking me, also without asking.

I think stealthing is definitely a way for men to have control over the other person. It clearly shows they have a lack of respect.

I was aware of what was happening, but I didn't say anything at the time — I felt way too intimidated and nervous. I remember just hoping that it would be over soon, and feeling shocked that he would have such little disregard for me or his wife's health, since I could have had an STD that he might pass to her. It completely changed how I felt about him and that encounter. I went from enjoying myself to feeling violated and dirty. I was shocked and speechless.

During both incidents, I felt completely violated. I had all these thoughts running through my head, like, ‘Oh, my god, what if he has something? What if he doesn't pull out in time? Did I remember to take my birth control?’ etc. And it’s pretty hard to enjoy sex when your mind is racing like that. When my ex did it, I felt like he was disrespecting me and purposely doing something that he knew I didn't want. But I was especially anxious when I was getting tested for STDs at my annual gynecological visit after the second time. However, I didn't take a pregnancy test during either occasion. Luckily, I had been on birth control and in both instances, the men pulled out before finishing.

I haven’t talked about these experiences a lot, in part because most people didn't know I was seeing a married man, and I didn't want to share that with my friends. I also didn't press charges, mainly because I didn't even realize this could have been against the law. I ended up telling one of my friends about that second encounter, but I didn't mention how it upset me, although they agreed that it was a gross and scummy thing for a married man to do.

For me, I think it must be about power and control. I think there are some men that care more about using condoms and others that see them as "optional." I think stealthing is definitely a way for men to have control over the other person. It clearly shows they have a lack of respect.

If I agree to have sex with someone, I'm trusting them with a part of myself. It's unfortunate and messed up when that person disrespects me and violates my body and my wishes.

With regard to future relationships and encounters, I just think about it as another way that guys suck. If I agree to have sex with someone, I'm trusting them with a part of myself. It's unfortunate and messed up when that person disrespects me and violates my body and my wishes.

To other women who share my experiences, I want you to know that it’s not your fault. It's really easy to blame yourself afterwards. But it's not your fault and it's wrong for men to do these kind of things. I doubt these men considered that what they did to me could be viewed as a form of rape, but they violated me — and that is never OK.

If you have experienced stealthing or any other form of sexual act without your consent, it's important to schedule an appointment with your doctor. You can also call the National Sexual Assault Hotline at 800.656.HOPE (4673).