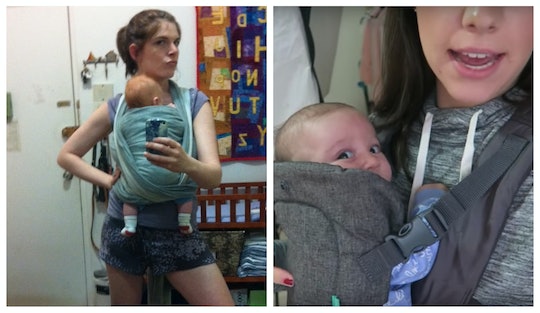 I Was Addicted To Babywearing & TBH I Loved Being *That Person*

It all began with the 7 train in New York City. Even before I was a mom, I’d notice parents struggling to push gigantic strollers into the cramped cars, sometimes knocking into other passengers, and always looking stressed. “I don’t want to do that,” I thought at the time. When I got pregnant myself, I began to notice the monstrous strollers everywhere — blocking the sidewalks, being awkwardly pulled up stairs, running over my feet. “I will NEVER DO THAT!” I swore to the city and my unborn baby. I decided to read up on the various slings, wraps, and soft carriers available to let me haul my baby about like a little koala. And I liked what I read. So much so that I wound up kind of addicted to babywearing.

Not only would babywearing reduce the need for a stroller, babywearing experts said it promoted bonding, made nursing easier, and freed hands for doing things like holding the subway pole. If you believed people like Dr. Sears, the very pro-attachment parenting author of The Baby Book, babywearing would basically cure any ailment your child might suffer from colic to sleeplessness.

I was sold. Babywearing was for me. Now all I needed was the perfect carrier! But which one?

At this point, six carriers in, I actually gave birth.

The intense woman at the babywearing class recommended a woven wrap because you could wear it so many different ways. I picked up a gorgeous grey-gradient Girasol wrap. But as practiced with a bag of flour, I quickly became intimidated. I purchased a simpler Sakura Bloom linen ring sling as a back-up. Then, at a holistic parenting class I heard about the soft structured Kozy Carrier, which would be PERFECT when the baby was a little older. I added it to the pile. Then, I was gifted a bright red Ergo buckle carrier and a lighter-weight wrap, too, just in case.

At this point, six carriers in, I actually gave birth. Harvey was a stunning red-headed baby. It was obvious immediately how much I loved him. What wasn’t obvious? Basically everything else. We struggled to nurse, he struggled to sleep, I struggled to take basic care of myself. And the harder it was, the more I started to feel completely out of control, trapped, and like a total failure.

The one thing that kept my head above the water was my determination to master the wrapping, buckling, and other techniques of babywearing. I watched countless Youtube tutorials, read and re-read the printed instructions, and called up other moms for advice. I focused hard on babywearing as an achievable goal — unlike getting baby Harvey to sleep in his crib.

Everything changed the day I finally left the house with my son securely in the ring sling. The feeling of freedom lifted me up, both body and spirit. It was like I could taste the sunshine. Suddenly I saw myself not as a struggling new mom, but as a competent earth mama who wore her baby and did it well. Other moms stopped me and asked me about the sling, and I answered their questions joyfully. After weeks of being feeling totally clueless, I was suddenly an expert in something. And it felt good. Really good.

And I chased that feeling for a few years. But unlike other addictions, babywearing gave me the same euphoric high every time. Every time I became proficient at a new babywearing skill, I felt even better. The day I finally nailed the intimidating woven wrap? Great. The time I mastered the Ergo back carry? Fantastic. The afternoon Harvey slept for two hours straight as I hopped buses and ran errands? Exhausting, but also totally bad-ass.

And I lived to give advice to other parents (always solicited FYI, I’m not a monster); recommending carriers, suggesting new wrapping techniques, and the always tricky how-to-nurse-in-a-carrier-without-flashing-the-7-train maneuver. Each one of these conversations made me feel more secure and raised my confidence. It stung less that I couldn’t get Harvey to sleep more than 45 min at a time or get his tear-ducts unblocked or get him to eat fruits & veggies. I was succeeding at babywearing, damn it! That kept me sane in a crazy, crazy time.

Babywearing allowed me to cuddle my son, nurse on the go, travel lighter, and be a super-smartie at the same time. Who could blame me for being totally addicted? I wore Harvey nearly full time until he was 2, when he decided that walking was a better choice (i.e., walking for two blocks before being pushed in an umbrella stroller the rest of the way.) I was sad that our babywearing time had ended, but after being a mom for a couple of years, I actually knew thing or two about parenting.

So it was with no regrets that I packed away my eight carriers (yes, I picked up another sling and a front carrier somewhere — it just happens). I didn’t need to be an expert in babywearing anymore, because I already was an expert in being Harvey’s mom.

And then two years later, my daughter Mabel was born and I had to throw out everything I knew about parenting and start again. But it was OK! Those nine carriers (new Moby Wrap — no comment) were waiting with me with open straps, ready to support me through the craziness one more time.