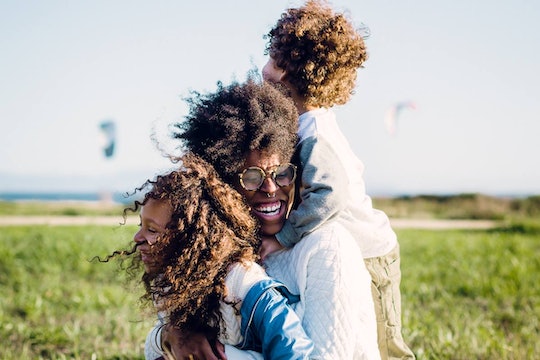 I Was Adopted & This Is What Celebrating Mother's Day Is Like

As I've gotten older, Mother's Day has taken on a very a different feeling and meaning for me. What once was a beautiful holiday to celebrate is now filled with deep sadness and guilt. I was adopted when I was born, and though I never thought very much of that, my feelings on my adoption changed when I became a mother. Celebrating Mother's Day with my adopted mom was all I understood and knew. I loved her, and having a day to celebrate all she'd done for me made sense at the time. Rarely did I wonder about the woman who had given birth to me. Because as a child, teenager, and then young adult, I never really wondered about her at all.

But then I had children of my own and everything I thought I felt about my birth mother shifted and changed. I suddenly had this longing and deep desire to tell her that I'd become a mother too, just like her. I wanted so badly to show her the person I'd grown into, to let her see who I'd become, and to introduce her to the child I'd brought into the world. Every time I looked down at my daughter, I felt a tinge of pain in my heart. Does my daughter look like her? Does she have her eyes? Her nose? Her hands? Even though I have no idea who my birth mother is, I still feel connected to her. Perhaps it's all in my head. Maybe I just want to feel connected to her, because as I get older, the more I want to know where my nose came from, and my freckles, and my hands. And maybe, if they didn't come from her, she could tell me if I look like my birth father. She could tell me so much about what makes me the person I am.

I don't refer to the woman who gave me birth as my real mother. I don't believe that by providing a body and sharing blood makes someone more "real" as a parent than the woman who stepped into that role after birth. I don't even think I would call her "mom" if I ever met her. But she's still important to me. She's a figment of my imagination, one I try hard not to imagine too often because I'm afraid I'll get her all wrong. When I dance with my arms stretched above my head though, and when I snort when I laugh, I wonder if she did those things. I have mannerisms similar to my mom, the woman who raised me. I make a stern look like her. I say "goodness, gracious" like she does. It's all learned behaviors, of course, and so I often think, "what would I have learned from the person who created me? How different would I be?"

My kids touch my face and point out the parts of me that look like theirs: my freckles match my daughters, she has even more further down on her cheeks; and my eyes are the same shape as my son's; their ears aren't as tiny as mine. They stand in front of the mirror and argue over who will be as brown as me, or whose hair will defy gravity first like mine. My children are the first and only people I know who look like me. Imagine that.

Now, when Mother's Day comes around, it's bittersweet. I love calling my mom and thanking her and loving her from afar. I try to remember that every day should be similar to Mother's Day, even though I'm not very good at following that all the other days of the year. My kids always have art they've created at school to give me, and we plan an adventure together. At the end of the day, we cuddle, and it's honestly the perfect way to celebrate. But I want to share this with my birth mother. I want her to be celebrated for bringing me into this world, when she didn't have to. I want her to be celebrated for existing. I want to share my mother's day with her. I feel conflicted at times, mourning a woman I don't even know when she's had no involvement in my life. I know that I am lucky because I'm not lacking in love from a parent, especially not a mother. And because I have friends who've actually lost a parent, I feel guilty knowing they really are mourning the loss of such a vital role in their lives on Mother's Day. But I still yearn for the woman I don't know, and I still want so badly to celebrate her.

These days, my 7-year-old daughter asks me questions about her ancestors. She wants to know if your ancestors stay with you, and how things get passed down from century to century, house to house, memory to memory. I don't always know what to tell her. I've been trying to trace my own ancestry and I haven't talked much to anyone else. In the same ways that she wants to feel connected to the people who came before her, so do I. And I've wondered, was my birth mother filling with this longing, too?

Talking to my children about the person who gave birth to me used to be easy, but now that they're getting older, it's harder for me. These conversations are laced with lots of longing. My kids touch my face and point out the parts of me that look like theirs: my freckles match my daughters, she has even more further down on her cheeks; and my eyes are the same shape as my son's; their ears aren't as tiny as mine. They stand in front of the mirror and argue over who will be as brown as me, or whose hair will defy gravity first like mine. My children are the first and only people I know who look like me. Imagine that. My whole life, I've always been the only one who looks like me, the only one whose features make any sense on my skin. But now I have two children who look like me. Who smile like me. Laugh like me. Who find pieces of themselves that match pieces of me.

Last year on Mother's Day, my kids and I explored a part of town I don't visit too often. It was quiet, and the children of course were not, but we headed to a tiny island off the beach where the water wasn't deep, jumping on rocks to make it all the way across. I remember how magical it felt, how honored I felt in that moment to be their mother. And I decided, right then and there, that that was where I would send all the light and love I could to my birth mother. I may not know her and I likely won't meet her, but opening my arms to the world she brought me into was enough.