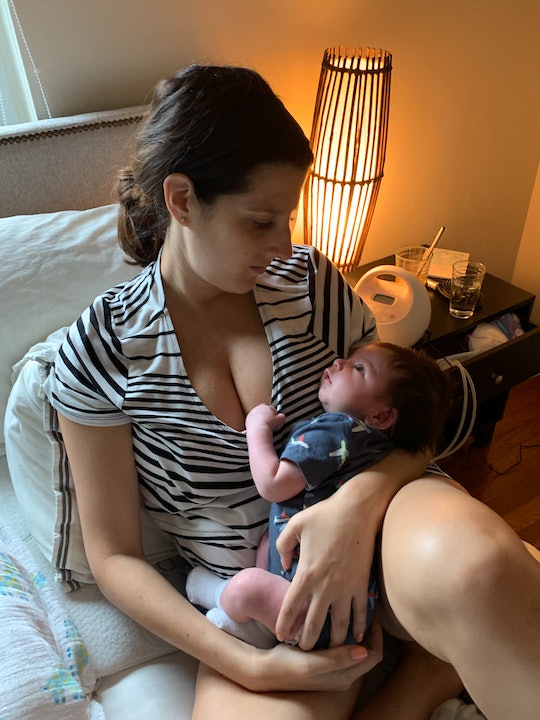 I Was Afraid Of My Baby

I have dreamed of becoming a mom ever since I can remember, and I have the IVF needle scars to prove it. But once I gave birth, I realized I was afraid of my baby. The very being I have wanted to hold my entire life filled me with an overwhelming sense of dread. I had heard of postpartum depression, but nobody warned me about postpartum fear, and I had no clue what to do.

It took my husband and me three years and three rounds of IVF to bring our baby into the world, but at 4 a.m.on a Tuesday in August, we finally became parents. It’s difficult to remember how I felt at that moment, but I do recall the overwhelming feeling of pure exhaustion. After a strenuous labor, cesarean section, and dose of narcotics that would rival what a rock band goes through in a week, the details of meeting my son are hazy. I do recall that we snapped lots of photos and squeezed in a few snuggles before our medical team whisked him away for monitoring.

The rest of our time in the hospital was equally murky. I was still drugged and fatigued, but our nursing squad of baby whisperers made handling a newborn look easy. After five sleepless days of diligently learning how to parent, our coaches sent us home to raise our child on our own.

Like most women recovering from a C-section, I was discharged with strict postpartum instructions — lots of rest (a tall order for anyone sharing a roof with a newborn) and to avoid lifting anything heavy. Unfortunately for me, my nearly 10-pound son fit into the “anything heavy” category. Luckily, my husband received four weeks paternity leave and was ready to pitch in where I fell short. The division of labor consisted of me pumping breast milk 12 times a day and forcing my wailing child upon my breast while his dad did nearly everything else. From diapers to swaddles, Daddy was in charge... and our little guy seemed to love it.

At first, I resented this dynamic. I was the parent who battled nausea, fatigue, leg cramps, and a persistent cough for nine months. I wanted to be the primary caregiver. But, eventually, I grew accustomed to the assistance and fell into step delegating tasks while I held court with my breast pump. Overworked and underslept, my husband hired a baby nurse to offset his responsibilities. I cried so hard her first night that she spent more time consoling me than our blissful baby. Even though I knew I couldn’t lift my son in my condition, I couldn’t bear to hand him off to a stranger in a uniform. Ultimately, we let her go.

The more my husband leaned in, the more I felt the urge to sit out, and an overwhelming fear grew within me. How could I be a good mom if I was scared of the position?

As time went on, I grew stronger and weaned off the medication, but I still found myself struggling to get in the driver’s seat. There was so much to catch up on. My diaper work was shoddy (often resulting in a projectile pee or poop stain), I had no idea how to maneuver my newborn’s head, and, for the life of me, I couldn’t figure out how to swaddle. My friends said that motherhood was instinctive, but to me it felt like my husband was the only one who knew what to do.

One month later, my safety net returned to work and I had no choice but to face my fear (and baby) alone. My husband begged me to hire a nanny to help with the transition, but I refused. I knew I needed time to bond with my son. The first few days were a disaster. He cried all day long, pooped everywhere, and struggled with nursing. After coming home to a mess, my husband suggested my relentless effort to breastfeed was making us all crazy and begged me to quit.

Call it instinct, but I knew it wasn’t the breastfeeding that was ailing my son. I went to the internet to see what the issue could be. In just a few clicks, I learned that he was sleepy and overstimulated. I put him on a flexible sleep schedule, which seemed to improve his mood, and for the first time since I brought my child home, I felt like a Real Mom. Saved by Dr. Google, I became addicted to researching newborns and practicing what I learned. From Facebook groups to online courses, I soaked up every bit of baby advice I could retain, desperate to extend the shelf life of my success.

My baby became my new project, and little by little, I learned his rhythm. Armed with an arsenal of new tools, I watched my fear begin to dissipate every time I calmed him. One night, my husband went out for drinks in the middle of our son’s witching hour. A college football game during the most stressful part of the day was more than an inconvenience, but my husband deserved a break. As soon as he shut the door, my baby began to wail, and I could feel my stomach turn. Without thinking, I grabbed my shrieking son and put him in the stroller. I circled the neighborhood and eventually settled him to sleep.

Meanwhile, panicked at the thought of leaving me during our newborn’s most trying time, my husband texted me to check in. In my haste to soothe my son, I left my phone unattended and my husband’s messages unanswered. He rushed home, thinking he was going to stumble upon a scene from American Horror Story, but instead found a freshly bathed bouncing boy sitting on my lap. When I witnessed the look of relief on my husband’s face, I realized I had turned a corner, and the miniature human sitting on top of me was far less scary than I made him out to be.

Two months (and a hefty data bill) later, I’m the baby whisperer in our house, and when my son seeks comfort, he looks for me. He prefers my breast to the bottle, and when he cries, I feel physical pain. I pick him up swiftly and smoothly, and when we’re alone, he gifts me with a smile he doesn’t show anyone else. My diapers are still hit or miss, but our connection exceeds what I could have ever envisioned. My friends laud me for my smooth transition into motherhood, but they don’t know that I needed to learn how to become the kind of mom I wanted to be.

When I look back at that early time at home, part of me worries I missed out on the blessings of the early stages of motherhood — the tiny baby snuggles and twilight skin-to-skin sessions. The other part of me recognizes the feeling is only mom guilt, and I did the best I could with the circumstances I was given. Either way, my baby’s homecoming was chaotic, complicated, and vastly different from how I pictured it… and that might have been the best preparation for the unpredictability of motherhood.