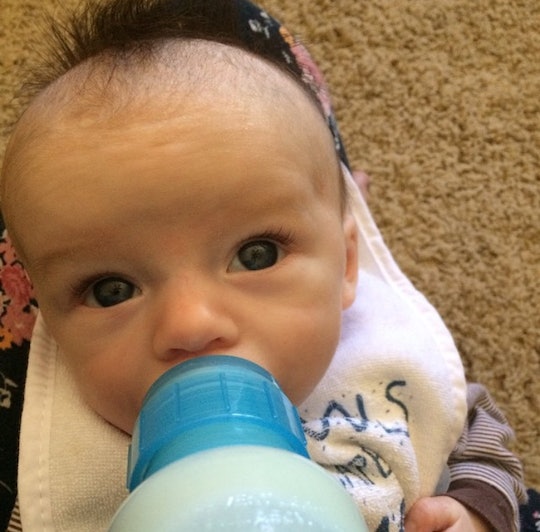 I Was Ashamed To Give My Baby Formula

I have a competitive streak. If there is a game, I want to play it – and I play to win. I love board games like Sorry and Boggle. I like to bowl and play darts. I like to be the fastest rider on the bike trail and the fastest walker on a city sidewalk.

Yet breastfeeding was one game that I didn’t win. In fact, it nearly killed me emotionally. Physically, it took a toll on me, too – but the emotional aspect of breastfeeding really did me in.

After I gave birth, I started out believing I'd be a shining star breastfeeder, and that I'd rear my baby on my breast milk alone. But I started supplementing with formula fairly early on, because honestly, I was tired of sharing my body with my baby.And while I’m certain that supplementing saved me, at least emotionally, it also made me feel deeply, deeply ashamed.

After days in the hospital with the doctors using different methods of induction to no avail, I had an emergency c-section. My epidural wore off insanely fast and it took me a while for my milk to come in, so I was sent to a room of my own while my baby was sent to the nursery, where he received donor milk.

I didn’t feel like a great mom. I felt like all of my energy was being funneled into the breastfeeding process. I felt like my body wasn’t mine anymore.

After I got home, my milk came in, and things started progressing nicely. I felt good, like the image of a mother made in nature. After all, I'd made it through the difficult birth process and was now successfully feeding my baby. What a great mom you are, I told myself. But I didn’t feel like a great mom. I felt like all of my energy was being funneled into the breastfeeding process, and like my body wasn’t mine anymore. I also felt sad most of the time.

I guess I'd started out with unrealistic expectations about what it would be like to have a baby. I had waited 10 long months to get to know this little being, but at the beginning, you don’t get to know much about them, other than which cries mean "I'm hungry" and which ones mean, "Change my diaper." I suppose I didn't feel like I was getting anything back from him, which made it hard to feel like I was giving him so much of my energy, not to mention my body. Plus, I was spending all of my time re-hydrating myself to increase my supply, so I was peeing constantly, which wasn't fun.

Eventually, I started pumping as well, but that too was difficult for my body. How long had it been since he’d eaten from me?, I would constantly wonder. Would I be able to get enough out this way? Do I seriously have plastic cups suctioned to my boobs? Do I really have to clean every piece and tool after every use, and silently count all of the drops of milk going through the tube?

One day, a friend visited me to say hi. I sat in the corner of my living room, my baby balanced on the boppy pillow, attached to the front of me. “He’s literally feeding off of me,” I told her, my brow furrowed. I was timing the minutes he spent on each boob, writing down his feeding times, and praying he wouldn’t show signs of hunger.

I don’t remember what led up to the supplementing. Fatigue, most likely. But one day, I told my husband to pull out some formula and mix it for me. He didn’t say a word. He did not care how our baby got his needs met, only that they were met. And I was so grateful for his support.

I cradled my baby in my arms and fed him the formula. And I will never forget what came after: for the first time during his feeding time, I cooed at him. I felt like I was off the hook. I was free to just feed him from that bottle and sing to him all the while. I was done. Unchained. Free.

By the time I gave up breastfeeding, the only one making me feel guilty was me.

When I was at home, feeding my son formula made me feel ashamed, but in a quiet, subtle way. When I saw another mother eye the canister of formula I fed him when we were out, however, that really hurt. I imagined that she found me weak, that she didn't think I was a good mom or a real mom. I imagined that her nipples had stung and leaked too, yet she had fought all the way through. I imagined that she had fought harder than I did to feed her baby. Thankfully, no one ever said a word to me about the formula. But the declarations of "One Year of 100% Breastmilk For My Baby!" that I constantly saw on my Facebook feed were enough to convince me they wanted to.

I managed to breastfeed for just around three months, and for half of that time I was supplementing. By the time we moved to formula full-time after the three-month mark, I had nothing but support in my circle. My husband believed it would be best for me emotionally, and my mom swore my baby would turn out fine. The biggest twist of all was that by the time I gave up breastfeeding, the only one making me feel guilty was me.

But deep in my heart, I knew that it was the right thing to do. It was better to give him the formula, if it meant that while I fed him, I looked at him softly, cooed to him, and sang. It was better for him because at the time, it was better for me. And there should not be any shame in that.