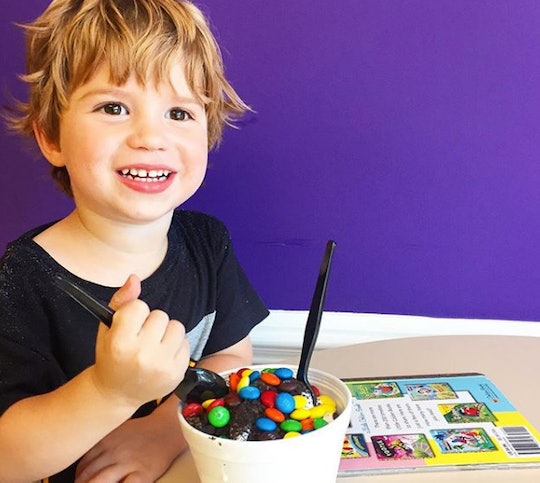 When my first baby started eating solids, I was determined to do everything right. I exposed him to a wide variety of flavors and textures and strictly limited the amount of sweets he took in — even healthy sweets like fruit. I didn't want my child to be a picky eater and was extremely proud that by age 2, hummus and lentils were among his favorite foods. And for the next few years, you better believe I was more than a little smug in my parenting success.

But then my second son was born. Once again, I started out intentionally selecting the healthiest variety of food I could offer. His first birthday cake was blueberry and sweetened with molasses, for crying out loud! (No, it was not very good.) But as he entered toddlerhood, it soon became obvious that things were a bit more complicated this time around.

It was just too inconvenient and tantrum-inducing to have two separate sets of rules.

Since I was now a mom of two, I was a lot busier and more tired than I had been as a first-time mom. I found myself reaching for packaged snacks more often and giving in when family members offered the boys a sweet treat. And as a 5-year-old, my oldest was entitled to a bit more leniency in his diet. I didn't want to say no to what other kids at play dates or birthday parties were having, so he got away with a lot more than he did when he was 1. Which was more or less OK, since he was still a great eater. The only problem was, my current 1-year-old often got the same privileges. It was just too inconvenient and tantrum-inducing to have two separate sets of rules.

I constantly ask myself, 'Is he picky because I was lazier as a parent, or would he have been this picky regardless?'

That second son is now 4 years old, and his picky eating drives me up the wall. I constantly ask myself, "Is he picky because I was lazier as a parent, or would he have been this picky regardless?" There's no way to know, of course, but it gives me something to think about as I dejectedly cut any shade of what might look remotely red off his sliced peaches.

My son and I are both as stubborn as bulls, and the disagreement about what he will and will not eat often results in a heated standoff. But research shows that battling with a picky eater over trying new foods is ineffective. Nutritionist Ilyse Schapiro tells Romper that fighting over food rejection only makes mealtimes uncomfortable and your child less likely to eat. On the other hand, parents who eat with their child at the table and hold pleasant conversation create positive associations with food that may, over time, result in the child being curious to try new things. With these facts in mind, I'm trying to learn to release control over meals and focus on connecting with my kid instead. Unsurprisingly, when I do this my own meal is much more enjoyable, too.

One of the most maddening (but also kind of awesome) things about parenthood is that we cannot control our children: They are who they are.

It's all too easy for me to freak out and assume my picky eater will grow up unhealthy and completely averse to all green food; as though him not eating broccoli tonight means he will be eating McDonalds three times a day when he's 40. This kind of catastrophic thinking is doing me no favors. Neither is it accurate, according to nutritionist Amanda Capriglione, who tells Romper children may need to be exposed to a food 30 times before they are willing to try it. That number blows my mind, but I'd be lying if I said it didn't give me a little bit of hope. Maybe he's not doomed for heart disease after all.

If I've learned one thing from my experience with parenting and food, its that I shouldn't judge other parents. Some kids will be picky eaters regardless of how "perfectly" their parents present food and health. Some kids may be picky because of their family's circumstances that I might not even know. Some kids are picky eaters because they have special needs and are sensitive to texture and color.

One of the most maddening (but also kind of awesome) things about parenthood is that we cannot control our children: They are who they are. We try to shape them for the better, of course, but in the end they are unique individuals. So until my son starts eating more than four foods, I'm doing my best to enjoy him while I have him and not waste the days in anger and fighting. But then again, I also don't tell him I slipped some spinach into his spaghetti sauce either.