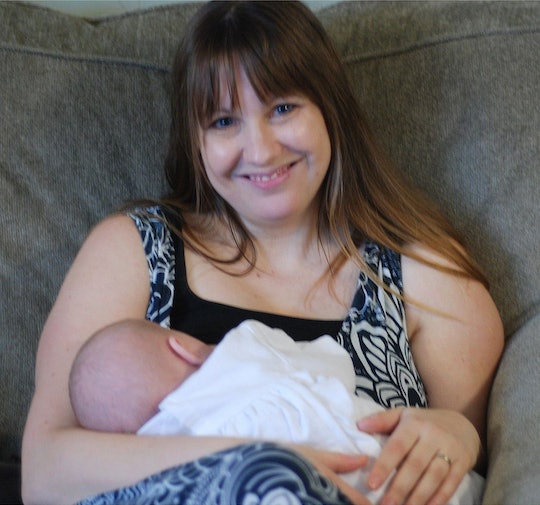 I Was Fat-Shamed For My Pregnancy Weight Gain

I’d made it nine months, and it had been a very rough pregnancy. In the beginning, I’d suffered from horrific hyperemesis gravidarum, a complication that's an all-the-time, can’t-keep-food-down sickness that includes uncontrollable vomiting. I was taking three different medications for it, and ended up in the hospital once for dehydration. Things had been bad, bad enough that I hoped I'd get through the rest of my pregnancy without an issue. I never thought I’d end up fat-shamed for my pregnancy weight gain. But then I was.

I have a tendency to gain weight during my pregnancies. I gained 40 pounds with my first, and 60 pounds with my second. I’d lost it all within a year of my children’s births, but I knew going into my third pregnancy that my body has a genetic tendency to pack on the pounds. My mother had the same tendency, combined with the same hyperemesis. Genetics were against me. But so was the medication I was taking for my hyperemesis: Phenergan, an antihistamine known to treat allergies and prevent motion sickness. It killed the nausea, along with a gastric-emptying drug called Motilium. But both of them slowed my metabolism. I wasn’t barfing, but I was sleeping for 16 hours a day. When I was awake, I was too tired to do any kind of exercise. Even a mild walk would wear me out. I was just so tired.

The anesthesiologist stabbed once. I screamed. He missed. He swabbed and stabbed again. I screamed again. He missed again. He did this four times. On the fifth time, I could only pretty much hear him throw up his hands. Then I heard him say: “If there was less fat back here, I might be able to get a clear shot.”

Then, around week 12, I started to crave sugar. I started to gain weight incredibly quickly: 7 pounds in one week. I had a family history of diabetes, so I knew what this meant: I was developing gestational diabetes. My doctor didn’t bother waiting for the glucose tolerance test, instead they put me on injectable insulin within two weeks of discovering I was diabetic. I tried to follow the diet, but nausea often prevented good meal choices and steered me towards bad. I couldn’t exercise the way they wanted me to. By the end of my pregnancy, I was on some of the highest doses of insulin the nurses had ever seen.

So it was no surprise that while I started out in size small maternity clothes, I creeped up into medium. Then into size large. I weighed 220 pounds when I went in for my medically necessary induction, a full 90 pounds over my pre-pregnancy weight with my third baby. I'll remain forever grateful to my dear OB and her team who never made me feel like I needed to gain less weight, who never made me feel like I wasn't doing the very best that I could. They understood the odds up against me.

Unfortunately, the anesthesiologist did not.

He flounced in, giant cart and assistant in tow, to give me an epidural. I was told to sit on the end of the bed, lean over, and hold tight to the nurse. My husband stood next to me. I held perfectly still so I wouldn’t get paralyzed. It’s an irrational fear, but a fear nonetheless. The anesthesiologist stabbed once. I screamed. He missed. He swabbed and stabbed again. I screamed again. He missed again. He did this four times. On the fifth time, I could only pretty much hear him throw up his hands. Then I heard him say: “If there was less fat back here, I might be able to get a clear shot.”

My throat constricted. I clutched the nurse’s arms tighter. No one knew better than me how much weight I had gained. No one. And to have a medical professional blame me for not being able to get a decent epidural hurt badly. I’d gone a whole pregnancy living in a bubble of a supportive medical professionals. Now I was confronted with the other side, the shame-and-blame side, and it didn’t feel good.

I felt my husband’s hand tighten on my shoulder. I wanted to cry. I figured the anesthesiologist was telling the truth. It took him seven tries to get the epidural in, and it still wasn’t quite right, numbing one side more than the other. If he hadn’t gotten it on that try, I was going to tell him to forget about it. I was so embarrassed at myself and my body, but I couldn't say anything.

After all was said and done, one of my friends told me he was just blaming me for his own ineptness. “That’s bullsh*t [that] he said you were 'too fat' to get the epidural in,” she said. “They work with women much bigger than you on a regular basis. He was just incompetent.” And looking back, maybe she was right. But even if she was, his comments haunted me all through my postpartum period, when I struggled to get rid of the weight as quickly as possible. If only I hadn’t been so lazy. If only I had eaten better. I beat myself up and resented my body. I stalked the scale. If only I had done better. If only some doctor hadn’t seen it fit to comment on my weight when it was none of his damn business.

Those comments hurt. They showed me how other people saw me: a fat pregnant woman who was too undisciplined to take care of her own body, even for her baby. Even now, three years later, when I've suffered unwanted weight gain from Prozac, I think people look at me and see a fat woman too lazy to control her own palate. Both situations had mitigating circumstances. But to the anesthesiologist, none of those factors mattered.