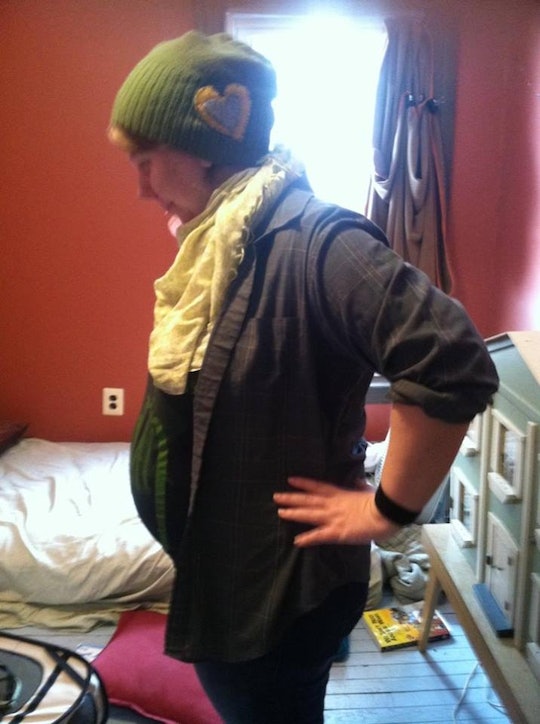 What It's Like To Lose Your Job After Having A Baby

When I got pregnant, I had a full-time job. It wasn’t an especially thrilling or lucrative job, but it made money which helped to pay our bills, and despite everything, I did enoy it. “I sell dog food for a living!” I would tell my friends with a smile, when they asked what I was doing. I’d never enjoyed a retail job before, but something about working in the dog food store, meeting the dogs, and talking about them with their overly excited owners, made the whole thing weirdly fun. I liked that it was a small business, and I got along well with my boss. I never expected in a million years that having a baby would cost me my job, but that’s exactly what happened.

I was never formally fired, and I never talked to my boss a talk about why I was being let go. It just sort of gradually happened over time. When, the morning after my c-section, someone in the hospital asked if I had a job, I found myself saying “well, I’m not really sure.” It was an odd space to occupy. I didn’t want to believe that I had been let go for having a difficult pregnancy. I didn’t want to have to think about the slog of looking for new work. I wanted to be a new mother, on maternity leave, planning to go back to work sooner than I should, because hey — isn't that how it goes in America?

Because I am in a same-sex marriage, my pregnancy was highly planned. We used a good friend as a known sperm donor, and after months and months of meetings and talking and contract signing, we got to work. Shortly before our first wedding anniversary, my wife performed the first insemination with a needle-less syringe on our living room floor. And while the whole thing was obsessively planned out, finding out I had actually gotten pregnant was still a huge surprise.

I thought my boss was my friend, and that she would be happy for me.

The first month we tried, I conceived right away, and then miscarried just as fast. The month after, we were in the process of moving, and I almost decided not to try again, because dealing with insemination on top of everything else was too much. But at the last moment, I had a change of heart, and luckily the pregnancy test came up positive.

I told my boss I was pregnant less than a week later. That might sound like an odd decision, especially since so many people wait to disclose their pregnancies to their employers, but I knew that for me, sooner was better. For one thing, I was already starting to get sick, and I knew I would be terrible at hiding it. I also felt like she was my friend (or at least, as much of a friend as the person who signs your paychecks can be), and that she would be happy for me.

On the surface, my boss was ecstatic. Right away, she started telling me stories about her own pregnancy and labor. She gave me tips on making sure I got enough support while breastfeeding. I told her I wanted to work for as long as possible, and she kindly said that if I needed to take time off sooner than my due date, she would work with me to make that happen. I felt totally and completely supported.

In retrospect, however, there were signs that things weren’t as rosy as I wanted to believe. For one thing, when the issue of pumping at work came up, and I asked her where I could express, she was noncommittal and weird. By law, companies are required to provide a private room for pumping that isn't the bathroom, as well as "reasonable break time" for pumping. But it quickly became apparent that both of those things would be challenging, if not impossible, at the store, which had only a tiny back room and a small bathroom. When I tried to discuss this with my boss, she said, “Well, we’ll just have to figure it out when we get to it.”

Then there was the matter of lifting heavy things while pregnant. The job required moving huge sacks of dog food around on a daily basis. That isn’t necessarily a problem for every pregnant person, but it was sure to become less of a good idea as the pregnancy progressed. My boss vaguely said that I should “try not to” lift heavy things, but I ended up being in situations where I had no choice but to just do it.

Then I got sick. In fact, I suffered from hyperemesis gravidarum, or severe nausea and vomiting, during the majority of my pregnancy. The first time I called in sick because I was puking my guts out, my boss was sympathetic and kind. But after that? I felt like she thought I was a teenager faking sick to get out of a chemistry exam, even though I was, in fact, a 29-year-old woman in the midst of a difficult pregnancy.

It was a little bit like an unofficial break-up: although I kept contacting her wanting to discuss my return date, she was evasive and obviously hoped that I would just take the hint and go away.

Still, I was regularly assured that I still had a job to come back to, and when I told other people about how cool my boss was being, they'd say, “You’re so lucky.” Right before my third trimester, I took some time off, and when I told my boss I wanted to come back to work until I actually left for maternity leave, her response was telling.

"Just so you know, I did have to hire someone else since you were out for so long, so I don’t know how many hours I’ll be able to give you," she said. I managed one short shift a week for about three or four weeks. When I finally had to admit I was just too damn pregnant to do it anymore, she seemed relieved.

In the early weeks of postpartum recovery, I still thought I had a job to go back to. But it was a little bit like an unofficial break-up: although I kept contacting her wanting to discuss my return date, she was evasive and obviously hoped that I would just take the hint and go away. Eventually, she sent me a text about not having the funds to pay me. It was suddenly clear that she had never really wanted me to come back to work at all.

Being a new mom without a job was unbelievably nerve-wracking. I knew I would have to search for work soon, but I also knew I wasn't exactly desirable as a new hire. My wife and I found ourselves in deep economic peril, and my inability to provide for my family took a toll on my mental health. Three months after my son was born, our lease was over, and no other landlords would take us with our low income and brand new baby. We ended up staying with friends, and for a brief time, we were technically homeless. It was scary.

Pregnant women in the workplace are incredibly vulnerable, and that losing a job can spell catastrophe for the entire family.

Two years later, I'm still not sure how I feel about the whole thing. On the one hand, I see that as a small business owner, my former boss was in a difficult position. She needed a reliable staffer who could adhere to a schedule, and I just wasn't that person for her during that time. I can pinpoint when she got really fed up with me towards the end of my pregnancy, and I can kind of see why.

On the other hand, I don't think that the demands of running a business should mean that low-income mothers like me, who have difficult pregnancies and still try to make it work, should be left with nothing. And when I think about what would've happened to my family if we hadn't had such a strong support network, I am horrified. The unfortunate reality is that pregnant women in the workplace are incredibly vulnerable, and that losing a job can spell catastrophe for the entire family.