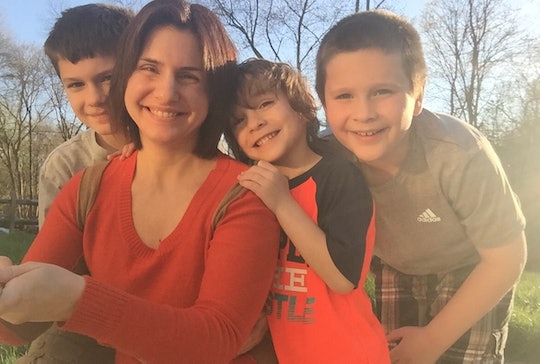 I was curled up in a ball on my therapist’s couch, sobbing, my 9-year-old son playing on his iPad in the waiting room. “You can’t send me back there,” I pleaded. “I can’t do that again.” The “there” I was referring to was the hospital, and my therapist did indeed send me back. I’ve been hospitalized for my mental illnesses more times than I can count. I have a number of mental illnesses, including bipolar disorder, post traumatic stress disorder (PTSD), depression, and agoraphobia, just to name a few. And I have a tendency to get severely depressed, which eventually leads to suicidal ideations (known, most commonly, as thoughts). When I get to the point of having a suicide plan and the means to carry it out, my therapist starts talking about the hospital.

I am routinely hospitalized when my depression becomes severe and I start planning suicide. I felt the onset of panic at being away from my children for an extended period, but when my therapist made clear that I would be going to in-patient treatment, I immediately put the wheels back in motion, contacted my support system, and made sure my parents were available for at least a week (because hospitalizations can take seven to 10 days, or longer) to provide child care. I am very lucky to have a support system and parents who are available and capable of taking over for me when I need to go inpatient. I realize that not everyone has that same luxury. It does take a toll, however, on my three young children when I am in the hospital. They miss me, and they make me presents and cards to give me when I get home.

Children are not allowed to visit psychiatric units, and my kids are not big on phone calls, so I’m not able to have any contact with them until I get home. When I need to go to the hospital, I tell them that my brain is sick and that I need the doctors at the hospital to help me find medications that work to make it feel better. It's a simple way to help them understand. And I explain to my kids that my feeling sad (I don’t use the word "suicidal" around my children) doesn’t mean that I don’t love them or that I feel this way as a result of anything they've done or said. I make sure they know this isn't their fault, but that it's because the chemicals in my brain not working correctly, and I need to get them fixed so I feel better.

Making sure I'm able to be my healthiest for my kids has changed my mindset about asking for help. I've learned that it doesn't make you weak to need help. It just means you are a person, like everyone else. And everybody needs help sometimes.

My parents are not young, but they've been very willing to step up and drop all of their obligations and come to help me. And it is particularly important that they do so, because I’m divorced and don’t have the support of a partner. When I’m away from my children in the hospital, it's hard on all of us. I am the adult who cares for them most often, by far, and we all need to do a lot of adjusting when I have to be gone for in-patient treatment. No matter the hospital, no matter the quality of the doctors and staff, it's really difficult for us to be apart from each other.

It's been very hard for me to ask for help, because as a mom I feel as if I should be the caregiver and I don’t want to seem "needy." Even though my parents were able and willing to take care of my kids, I typically have had a very hard time telling them what’s going on and asking for their help. I’ve often felt that because I’m an adult, I should be independent. At a certain point, however, I realized that when I covered up my struggles and hid them, it only made things worse. My depression would get more serious and I would isolate more, spiraling down even further. So I made the decision to be forthcoming with them, and it’s taken some of the stress off of me, knowing that my kids are well taken care of and happy while I am in the hospital. Making sure I'm able to be my healthiest for my kids has changed my mindset about asking for help. I've learned that it doesn't make you weak to need help. It just means you are a person, like everyone else. And everybody needs help sometimes.

When I arrived at the hospital, the security guards took everything I could possibly use to hurt myself, including the strings on my sweatpants, hair ties, and pens. Since I'd been through the process at other hospitals in the past, I knew not to wear sneakers, because the shoelaces would have to be taken away as well. My cell phone, wallet, and the rest of my personal items had to be locked up. They sat me in an exam room and a nurse did a thorough physical exam. Then someone else went through the bag that I had brought with me to look for contraband items. I’d completely given up my privacy in the interest of my own safety. Once they were assured that I had nothing in my bag with which to hurt myself, they phoned over to the unit to find an available bed. I waited on a couch in the waiting area and eventually fell asleep.

Psychiatric hospitals are a bit like school. There are clearly laid-out schedules on the wall, and the routine is very similar every day.

About an hour later, the woman who had gone through my bag woke me to put me in a van and bring me to the unit. The entire floor was locked, as are all psychiatric units. This has always been a major cause of anxiety for a person like me, because I suffer from panic attacks, particularly when I am not in control of a situation. However, it is eventually something I have managed to get used to. On this particular unit, the patients ranged in age from 19 to around 60. Most were on the younger side, in their 20s. There were many ordinary-seeming people, people you’d never know needed this kind of intensive help. They are people who, in most cases, just want to get better, so they can get home.

I was settled into my room, which I shared with a roommate who was in her early 30s. We went to dinner and then had an evening wrap-up group, got our nighttime medications, and were off to bed. Psychiatric hospitals are a bit like school. There are clearly laid-out schedules on the wall, and the routine is very similar every day. Starting at 7 the next morning, the staff woke all the patients and we went out to get our vitals taken. Breakfast was served and after that there were different forms of group therapy for the morning that last until lunch at noon. This particular hospital focused on cognitive behavioral therapy (CBT). Psychology PhD candidates are usually the ones teaching the groups, but occasionally a social worker will lead a group as well. After lunch, there was an opportunity to go out for a supervised walk on the hospital grounds, and then there was a snack and more group therapy until dinner. After dinner, we had some free time and then a wrap-up group for the evening. Lights out was at 10.

I know that if I hide myself away, I’ll end up in bad shape again. I am also taking the time for self-care, which I hadn’t done before. I take the time to do things for myself, like get my nails done, dance, and practice yoga. Everything that I do to fill my proverbial cup leaves me room to give to others, particularly my kids.

It was clear from the beginning that the staff members at this particular hospital clearly wanted to be working there, and they were kind and treated the patients well. I felt like my opinion was valued as a human, and I didn’t feel like just a diagnosis or a number, as I have at other hospitals. Though people will try and tell you that being hospitalized for your mental illnesses makes you "crazy," some of the people I've met in these situations have become some of my greatest friends.

But the friends I've made over the years — and even on this trip — didn't stop me from missing my friends and family on the “outside.” It was very hard to keep in touch with people because there was only one landline allowed for use by all the patients, and phone calls are limited to five minutes, in case someone else needs to use the phone. I knew ahead of time that I would only have access to a landline, and since I never remember anyone’s phone number, I brought a list of numbers of close friends and family, and my therapist, with me so that I would have them handy. But a few five-minute phone calls are no substitute for in-person contact, and even though I was able to talk to my parents, I missed my children very much.

After six days and some medication changes, I was deemed recovered enough to be released from the hospital. I had driven myself to be admitted, so I walked out in the rain to my car and drove home and into the waiting arms of my kids. Since I've left the hospital, I’ve taken a number of steps to ensure that I stay well. I continue to keep my family, particularly, posted on how I am feeling and how my mood is. I know that if I hide myself away, I’ll end up in bad shape again. I am also taking the time for self-care, which I hadn’t done before. I take the time to do things for myself, like get my nails done, dance, and practice yoga. Everything that I do to fill my proverbial cup leaves me room to give to others, particularly my kids. And I've also made the decision to get an au pair to help with the kids, which, I realize, is not something everyone in my position can do, but it helps knowing that I can take time to sleep more if I need it, and so that I can delegate some of my many childcare responsibilities.

I have chronic mental illnesses, so odds are that I will probably need to be hospitalized again at some point. But I am putting supports in place, such as the au pair, so that it will be easier on me, on my kids, and on my parents, other family members, and friends when that time does come. The hospital is a pretty distasteful place to be, particularly when I have young kids at home, but it has absolutely kept me alive. Because of that, I'd go again. And again. As many times as I need to. Because my children need a mother who is as healthy as she can possibly be.