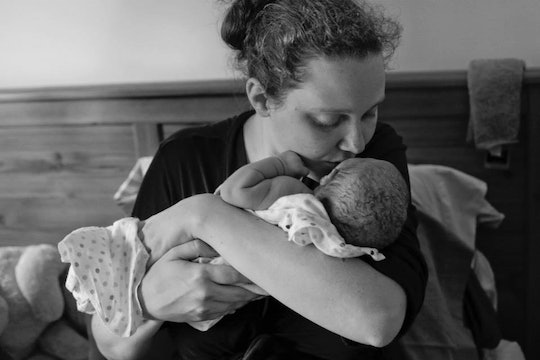 When I was pregnant with my son, I did everything I could think of to prepare for childbirth. I attended classes. I read scads of books. I listened to relaxation and hypnosis CDs. I wrote up my birthing hopes and dreams. I surrounded myself with positive birth affirmations. I took prenatal yoga and happily did all those moves that were meant to open up my pelvis. I felt so prepared for every possibility. I viewed it as a difficult but rewarding physical experience akin to running a marathon. I knew first labors could be long, but I had no idea just what being in labor for 72 hours — a marathon labor — was going to be like.

Like a lot of first-time-moms, I was eager to meet my baby. I didn't know the sex, and couldn't wait to find out. I had washed and folded all those tiny clothes. So when I went to my 40-week appointment, I was disappointed. I wanted to be at the birth center under different circumstances (like, you know, because I was in labor) so I jumped at the chance to have a little help getting things started. Up until that point, I'd declined any internal exams. I trusted my body. I knew that finding out how dilated I was didn't actually translate into baby being born soon. I didn't want to introduce infection. But the midwife offered check me (I was 3 centimeters!) and to do what's called "sweeping the membranes," which is basically an internal exam where a finger is gently inserted into the cervix and swept around the inside of it. When the bag of waters is separated from the cervix, it releases a huge dose of prostaglandins. The prostaglandins ripen the cervix. And in some cases, sweeping the membranes can cause labor within 48 hours of being performed.

I went to bed that night, hoping that I'd wake up in full-blown labor. And that's what happened, except it would still be three more days before my son arrived.

For me, the procedure didn't cause full-blown labor. But it caused a lot of cramping. I started having contractions that weren't super painful, but that gave me pause. I woke up the next day, a Friday, and found that I'd lost part of my mucus plug, which meant that my cervix was opening, which meant that I was maybe, sort of, kind of going into labor. I was so excited.

By Sunday night, I was in a really low place. For the last three mornings I'd thought, "today is the day! I will meet my baby!" and I was let down time and time again, crying as I tried to go to bed to get some sleep only to do it all again hours later.

I learned from my childbirth class that there are lots of signs of impending labor, but nothing meant you were actually going into the home stretch unless your contractions are regular, increasing in strength, and increasing in frequency. I did my best to ignore the contractions I was having. My partner and I went out to eat with my in-laws, and every time I had a contraction, I squeezed my partner's hand under the table. I just had this feeling the baby was on his way. I went to bed that night hoping that I'd wake up in full-blown labor, and that's what happened, except it would still be three more days before my son was arrived.

I woke up at 2 a.m. on Saturday morning with a strong and painful contraction. Eight minutes later, I had another. Another eight minutes and yet another came. I didn't wake up my partner because I figured he should get some sleep. I knew I should go back to sleep too, but every time I started to drift off I'd have another painful contraction. I gave the notion of sleep up and got out the app I'd downloaded for the purpose of timing contractions. I discovered that my contractions were not coming regularly. Sometimes they'd be as frequent as six minutes apart, but other times I'd have as much as 15 minutes between each one.

My contractions kept that pattern — or non-pattern — through Saturday and Sunday. My mom and my partner spent those long days catching naps when they weren't soothing me through contractions and watching comedies to try and distract me.

By Sunday night, I was in a really low place. For the last three mornings I'd thought, "today is the day! I will meet my baby!" and I was let down time and time again, crying as I tried to go to bed to get some sleep only to do it all again hours later. The only thing I could stomach was vanilla ice cream. I just didn't want anything else. My energy was quickly depleting because of my lack of sleep and, likely, the lack of food.

In retrospect, I wonder why I hadn't called my midwives. Except in that moment, I was waiting for my contractions to be regular and five minutes apart before bugging them. But by Monday morning, I finally called. The midwife I spoke to suggested I come in and maybe get checked to see what progress I was making and to see how baby was handling things. She told me that likely one of three things would happen: 1) I'd be admitted to the birth center and given morphine to help me sleep, 2) I'd be sent home with some Ambien, or 3) I'd be sent to the hospital for Pitocin. None of those options appealed to me. I wanted a drug-free birth.

As the day continued, my contractions were coming closer together and were still coming on really strong. I couldn't speak through them, and I hadn't been able to for a couple of days. The car ride to my midwife was hard, but by that point I was very practiced at coping with contractions. That's a definite bonus to a long, slow labor: it never felt like too much to handle. It ramped up slowly and gradually.

When I got to the birth center, they told me I was five centimeters and that they could tell by how strong my contractions were that I was really in labor. No drugs were necessary. I was so relieved, but it'd still be another 12 hours before I met my son. And I think the relief is what really kicked things off. I knew I was where I was going to give birth. I felt a new surge of confidence that things were progressing as they should, even if it took longer than the average woman. But what is average? This was the first time my body was doing this.

After a couple hours laboring in my room at the birth center, my water finally broke and things got intense. Two more hours of sitting in a warm jacuzzi, and I finally reached 10 centimeters and could start pushing. I pushed for three hours. I think it was because I was so tired. Not just me, but my uterus as well. It's a muscle, and muscles get tired when they're used for three days straight. It took a lot for me to push my son out. I had to strain with all my might. I had to try a dozen different positions. I never really felt the urge to push, so I had to make up for it by pushing and pushing. I only really know that now because I've had another baby, and I barely had to push to deliver her. My uterus did almost all of it.

When my son was born, as any mother would probably say, the long labor didn't matter. He was born. He cried. I held him and saw that he was a boy and all the tiredness of the last three days just washed away.

It was an amazing birth. I felt calm and in control the whole time. Aside from feeling tired and discouraged, I really hadn't suffered too much. I had handled the endless contractions. I did it. I delivered a baby even though I was exhausted and my uterus was not as well-rested as it could have been. Yet I felt like a total rockstar.

When I tell people I was in labor for three days with my son, I often get looks of pity. But I assure them that it was amazing. It might not have gone how I imagined it. I might not be able to pinpoint when "real" labor started. It was such a gradual process. It could have gone differently if I had had more medical interventions. Surely, I could have met him sooner. But maybe that's the way my body wanted to labor. Maybe that's the way my son needed to be born. Birth is amazing, no matter how it happens, but I was so happy that it had all gone on my terms and without interventions. I feel immensely proud of all the work I did to deliver my son — I'd marathoned a delivery, and the prize at the finish line was incredible.