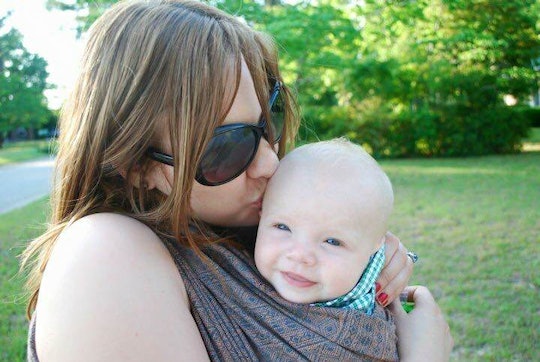 My first son took three days to come, so naturally, I had no clue what a fast labor felt like. Hell, I didn’t even know what a precipitous labor was, nevermind the fact that I'd ever deliver a baby in just three hours. My oldest came into the world after three days of back labor, three days of screaming, three days of misery at the hands of my midwives. So when I got pregnant with my second, I told my OBs (by this time I had switched to an OB and no longer used a midwife) not to rush when the time came to deliver. “The last one took forever,” I said. Adding:

So don’t drop everything and run to the hospital when I call. You’ve got plenty of time.

I figured on having at least a day for baby number two to arrive. However, he had other ideas.

A precipitous labor, as defined by the National Center for Biotechnology Information, is the "expulsion of the fetus within less than [three] hours of commencement of regular contractions," and yes, they literally do use the word "expulsion." According to Williams Obstetrics and JustMommies.com, a precipitous labor can be caused by an extremely "efficient" uterus that contracts with unusual strength and is aided by soft tissues along the birth canal. After the birth of my firstborn (which, again, took three days and required a medical intervention from an OB-GYN) I had no idea that I'd be at risk or that I was even likely to have a fast labor. Had my first labor been fast, I could have better prepared. Had I known what could happen, maybe I wouldn't have been so terrified.

I spent the Monday of his birth doing what I normally did. We went to church, and I joked how he’d taken up residence in there. Afterwards, my husband, son, and I ate lunch at our favorite restaurant. Then we all went home and played. That’s when the contractions started, somewhere around 7 p.m. They were slight, and I figured I had days to go — but they felt the same as before, the clenching pressure of a baby coming. We went out shopping. I got some shoes, and paced through my contractions in the store. They were only 10 minutes apart (really eight), so we went out for Chinese food. On the way home from dinner my contractions had dropped to every five minutes. “You need to call,” my husband said. I insisted, over and over, that I still had time.

“You seriously have to call,” he said again.

I rolled my eyes and called my OB. I appraised her of the situation, reminded her how long my first-born baby had taken, and told her she wouldn’t be seeing me any time soon. She told me to call if anything changed. She wasn’t worried and said she’d make her way to the hospital. But things did change, despite my denial. By 8 p.m. my contractions were just four minutes apart. Then three. My husband called our babysitter, who took one look at me and insisted I hit the hospital, stat. “I have to finish folding this laundry,” I said. I didn’t want to wait around a hospital for a day before I had a baby. On top of that, I still felt fine. There was nothing off or strange about the way I felt. Sure, the pace and tenor of my contractions had changed, but my body was getting ready to birth a baby. This was par for the course.

But everyone kept telling me that it was time to go to the hospital. So off we went.

When we arrived, my contractions were taking place every three minutes, but I was no more than three centimeters dilated, and I had to hit four centimeters before they transferred me to a birthing room. It took me just 20 minutes, and I refused a wheelchair. I walked over to that room on my own. It was 9:30 at night. It'd only been two hours. At least the labor and delivery ward will be more comfortable, I thought.

That’s when things started to pick up and get scary. The serious pain set in: I realize now it was when I hit about seven centimeters dilated (which is when the active labor phase changes to transition phase of labor). But they couldn’t give me an epidural until the doctor got there, and my doctor was nowhere to be found. Maybe because I’d told her not to hurry. My husband and nurse, who was also a friend, held me up during contractions. I paced. I demanded drugs. They said I had to wait. And then I started to scream from the pain. I was in transition, moving from from about 9 to 10 centimeters, the most intense and painful part of labor. I called out all the saints’ names like an old Catholic woman. I can’t do this anymore, I thought. I was literally going to die.

The nurse insisted I get in the bed. She checked my cervix and wouldn’t tell me how dilated I was. That’s because I was at 10, and still, no doctor. The staff surrounding me began rushing, wondering who the hell was going to deliver this baby. I screamed some more, now terrified that maybe I'd told my doctor the wrong thing. Did I wait too long? Were we in danger? Was everything not OK?

“The doctor’s here!” the nurses announced, and an anesthesiologist appeared. “Sit up,” a sweet nurse directed. I sat up. And I felt like pushing, so I pushed. When I pushed, all the pain went away. All that pressure broke my water, on the nurse, as if I’d tossed a water balloon in her face. I got her nose to toes, and the relief I felt left no time for the embarrassment I'd have maybe felt otherwise. At that point I just wanted my baby to come out. I just wanted it to be over.

I had no idea how far along I was, so I was still begging for drugs — more and more angrily. If I’d known I was 10 centimeters, maybe I’d have toughed it out. I didn’t know you could medically or ethically give an epidural that far along, but they did it, and I sure as hell didn't question the decision. I didn’t feel it. I was once again in pushing position in the stirrups when my doctor rushed in. “You push whenever,” she said.

I’ve had two other labors, one before, and one after. The earlier labor took days. The third labor was an induction, and involved Cervidil and an overnight hospital stay. Both of them eventually required Pitocin, and I spent most of them on my back in the bed. I thought, surely, that because I'd had a precipitous labor the second time around that my third baby would follow suit. So we left nothing up to chance. Yet he took his sweet time.

I'm still not entirely sure why my labor the second time around was so fast. I don't know what caused it or if there was anything to cause it. I think it just happened. And now, looking back, if I had to pick a labor I’d pick a precipitous one. Yes, it was terrifying, but it was over almost immediately after it started. The CDC reports that just 2.26 percent of births are precipitous — that’s 21,000 out of 945,180 live births. Multiparous, or women who’ve had more than one child, are much more likely to deliver precipitous; only 9 percent of precipitous births occur in first-time moms. Maybe that's why my baby thrust his way into the world so soon: I'd already had one delivery, maybe my second son knew I'd want this one to be over quick.

Start to finish, it took less than three-and-half hours to give birth to my son, and that’s counting early, irregular contractions that generally don’t result in much. I spent most of that time eating Chinese food and folding laundry. Once I hit four centimeters, things began to get intense because I dilated so quickly. That’s what made it so painful. But the pain was only scream-worthy for about 20 minutes, when I was in transition. The fear, however, was something that I wasn't ready for. I worried like any woman in labor might worry, only that fear was compounded by the fact that everything moved so quickly. Luckily my son was born safe and sound and we were all surrounded my medical professionals. Though nothing went according to plan, if I had to do it over again, I'd plan on a fast birth.